“Made in the Shape of One’s Own Desire”

44
Implacable necessity of
The alphabetic imperium
We grunt under,

Of the day
That it tarries
And readjusts, up-

Dates its clocks,
All “set” for
Man’s own proceedings

To fill a
Variorum edition of
What hap’d in

Particular: the black
Peg, the slate
Board, the homey’s

In the pharmacy
Door, pick in
Hand. Poetry is

A kind of
Inevitablism honor’d, a
Rage to romp

Uncommittedly in meadows
Full of fireweed.
It is ornery,

A temporary stasis
Conceived in liberty,
With constraints and

Strictures put into
Play by sheer
Use. It swelters

Benign and under-
Achieving in unfurnish’d
Rooms where sentries

To a candidate
Stuff ballot boxes
With unprovenanced notices

And fail to
Own up to
Their words, Rimbaud

In Cairo discounting
The futurity of
The Villon-Baudelaire-

Verlaine line, tossing
Vowels off into
The blue’d desert

With the savage
Air of legend—
For novelists, the

Vigorous inheritors of
Diminutives, all the
Words nobody owns.

Finish’d Durrell’s Panic Spring and lit out for the territory call’d The Recognitions, Gaddis, William Gaddis. Funny how two books’ll elide without plausible intermission (particularly if one’s reading on the verge of sleep). Durrell:

Sitting there, in all simplicity of mind, he contemplated his own death as something new and delightful; a divorce from the present which was perplexing, always perplexing, with its trivialities. Death, once beyond that partition of physical pain and fear, seemed to him made in the shape of his own desire. It would be a place of infinite understanding, in which there would be no bars for the roving intuition; everything would be open, and explored. Death must be a very spacious place, he heard himself think, in which so many heroes can be accommodated, so many mysteries solved. And thinking like this, in the warm first flush of exultation, he recalled to his mind all those things which before had done him hurt, trying to prove that the new strength was proof against them. As a man will press a bad tooth to see that it still hurts, he filled his mind with the unhappy things, but was at peace.

“Made in the shape of one’s own desire”—the very definition of the everyday. And why, precisely, in the earliest pages of The Recognitions, here, say, with the young Reverend Gwyon in Madrid (he’s only just bury’d wife Camilla, here, in Spain)—

Around him less than a million people closed outside shutters, sashes, inside shutters and curtains, hid behind locked and bolted doors themselves in congruent shapes of unconsciousness from the laden night as it passed. Through that open window he was wakened by lightning, and not to the lightning itself but the sudden absence of it, when the flash had wakened him to an eternal instant of half-consciousness and left him fully awake, chilled, alone and astonished at the sudden darkness where all had been light a moment before, chilled so thoroughly that the consciousness of it seemed to extend to every faintly seen object in the room, chilled with dread as the rain pounding against the sill pounded into his consciousness as though to engulf and drown it. —Did I close the study window? . . . The door to the carriage barn? Anything . . . did I leave anything out in the rain? Polly? . . . a doll he had had forty years before, mistress of a house under the birch trees in the afternoon, sun, and those trees now, supple in the gale of wind charged inexhaustibly with water and darkness, the rest mud: the sense of something lost.

That knowing that arrives full-treacled, a gush of innards display’d de-bellying the cow, ripest desire at the gash-moment of total loss—is that it? What the everyday conceals for delivery in its off-moments undeclared (to customs, to the customary). Why it is necessary to lay siege to it, relentlessly, make a ménage of it, the quotidian.

How strange to thing of The Recognitions being deliver’d up in 1955. I recall an energetic, if somewhat prissy, guy a few years my senior reading it in Ithaca, early ’seventies. I’d swear it belong’d to that “era.” (Second novel, J R, publish’d in 1975.) William Gass captures some of the myths of the intervening:

He had been a floorwalker at Bloomingdale’s. That was one rumor. He was presently writing under the nom de plume of Thomas Pynchon. That was another. He had had to pay Harcourt Brace to publish The Recognitions and then, disappointed and peeved by its reception, he had the unsold stock destroyed. He died of dysentery or some similarly humiliating and touristy disease at forty-three and had been buried stoneless-in-Spain under a gnarled tree. Among the more absurd was the allegation that he had worked as a machinist’s assistant on the Panama Canal and served as a soldier of fortune for a small war in Costa Rica. He had no visible means. What he did do was traipse. He became a character in books which bore a vagrant’s name. No. He worked for the army and wrote the texts of field manuals. No. He scripted films. They told you / showed you how to take apart and clean your rifle. A rather unkind few suggested he had been a fact checker at The New Yorker. Not at all, argued others, he was born a freelancer. And became a ghost who moved corporate mouths with gathering material for a novel he would write one day about America and money.

(Momentary anonymous grip on my wrist that, maybe, one ought, in the global unbuttressing of the banker’s glorious halls, be reading the “America and money” book (J R). Ought’s a funny word. And, Gass notes, too, how, post-anonymity, Gaddis provided the editors of a book of essays about him with a drawing of himself, “suitably suited and bearing a highball glass.” Gass: “The figure has no head.” I recall seeing Gaddis read circa 1995—a little pinch’d, astringent, fractious, “suffer no fools” and with a ravening mirth-light to the eye.) 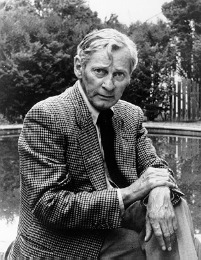 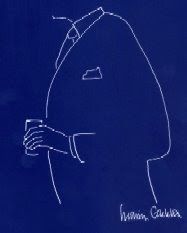