46
The day’s shot, and little
Compleat’d, night walks right up
To the door and knocks.
Whitman’s “momentary pulsation of a
Liquid & structureless whole” is
All that’s possible, a snap-
Shot pull’d dripping out of
A bath of chemicals, hung
Up wet, one clothespin pinching
It to a line, one
In a row of others,
Black and white. A picture engages
One’s sympathy or refuses any
Despotic claim of saying the
Unsayable, proceeds by smudge contrapt,
Or delinquent roundabout bat: a
Swing and a miss that
Nonetheless allows the runner to
Advance. I recall the lost
Years I hunch’d and huddled
Firing point’d blanks, blunt digits
Into the typewriter, a mechanical
Clatter drubbing the erasable bond,
Making something inky and nonplussed,
The gorgeous lie of youth.
“The way the day’s got
Of taking off its hat
And offering it to you
Is tease and propaganda for
What the day is not.”
And it proceeds with freight
Of such insincere foppery in
The guise of honest exploratory,
I end up admiring the
Blockheaded gusto of it all:
“The head a hat’s just
Bared does well in air
And is not square but
Peevish and scouting, a ham
With shoulders, a croissant with
Ears, or Deborah Kerr with
A man, a beach, and
An ocean.”
That’s the sudden
Way we did it then.

Blankness in the ossuary, meaning unpreparedness coddles me in its rancorous soup. I see that William Gaddis claim’d—like Samuel Butler before him—that he wrote in order to have something to read when he got old. And there’s a Frenchman (Jacques Roubaud) doing a riff De la mort de l’auteur by re-revving up Ted Berrigan’s slight and funny and objurgating note to the “people of the future”: “while you are reading these poems, remember / you didn’t write them, / I did.” (Berrigan drawing a dong-nosed “Kilroy was here” on pal Ron Padgett’s lines in “Tone Arm”: “You people of the future / How I hate you / You are alive and I’m not / I don’t care whether you read my poems or not,” who no doubt copped the rhetorical geste out of some French ditty—maybe one of Pierre Reverdy’s, non? for, as Padgett says somewhere, “Oh those French!” There’s John Ashbery’s “academy of the future” tromping the same back-alleys.) Uh. Mighty, mortifyingly, distract’d I am today. Pierre Reverdy, is he a French “objectivist”? John Ashbery says he “succeeds in giving back to things their true name, in abolishing the eternal dead weight of Symbolism and allegory so excessive in Eliot, Pound, Yeats and Joyce”—and refers to Reverdy’s “transparency without philosophic meaning.” And one Mortimer Guiney relates that Reverdy’d tell “the story of his friend Braque, whose habit it was, after finishing a painting, to take it outside and place it alongside natural objects to see how his created object fit in with them.” Reverdy himself, who end’d up in the monastery of Solesmes, exhibit’d a kind of sublime indifference to nature, referring to its “hostile indifference,” claiming: “There is no beauty in nature, just what we are able to project into nature.” Using the phenomenal world, not to mimic, but to make. Who is Mortimer Guiney? (I am looking at a terrific little off-handed piece call’d “Reverdy in New York” out of a 1985 issue of World Literature Today.) Guiney quotes lines of a 1962 Frank O’Hara letter he received, how “John Ashbery drew my attention to Reverdy’s poetry about ten years ago”; how he was “very influenced by it, though I suppose the poems were not really good enough to show this influence very clearly”; how he “at least for a time was taken over by that lovely quality of walking-along-the-street-conscious-of-moment-by-moment in some of Reverdy’s poems”; how Bill Berkson’s “pushed further in a technical and formal direction.” Too, he quotes Kenneth Koch saying of Reverdy: “He is one of a few poets I often read in the morning when I am planning to write. The way he detaches things from their ordinary contexts and rearranges them so they seem beautiful and new usually sends me quickly to my typewriter, though the results are not usually recognizably Reverdyesque.” And, to “torque” my impression of Reverdy as a kind of semi-somnolent puffy-eyed larker, Guiney writes: “He was a notoriously difficult man in everything, stubborn and opinionated, and was just as apt to respond to what he didn’t like with his fists as with a nasty, acerbic comment.” 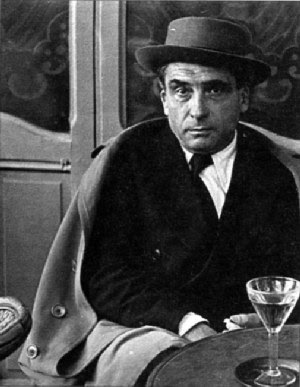