47
Hybridity’s not exactly a bottleneck
Of prudish indecision, like attempting
To decide whether one maybe
Ought to change one’s name
To Bob—there are so many
Bob’s (and mostly doltish unelectables)—
It’s the ineluctable way the
Music wells up promiscuously at
The escarpment at the end
Of the cul-de-sac
Whenever we approach it, and
Drenches us with the rubble
Of its making. Of course
We are trying to get
Out into the open where
The road’s less trammel’d by
Sheer odious dignity of Bobs
All doing the work—they
Call it work—of writing
Up a storm, all perspicacious
As parliamentarians and militantly managerial.
The age demand’d a vigil
Over every .pdf and pixil.
Sign up for Google Alerts
For comprehensive mention of dirt.
And if the music of
The interior pages falters, there’s
The grip of the copula,
The cut of the swank
Journal, the drab study of
Hours and hands, awkward points
Of suspension, histories of timidities
Parcel’d out of blanks and
Fogs, sources cursory, borrow’d or
Far, far off.
Bob jettisoned the haggard lover look and stood to the helm. Caroline stooped to the poodle’s duty, radiating implausibility. Helen dolefully clattered an ever-shrinking Certs against her teeth while awaiting for the drop. Jim sheepishly admitted that he’d misplaced the chicken permit. “Hedge,” Jacqueline snarled, “is not exactly the word I’d use.” Thomas, efficacious to the end, sought a kind of priapic comfort up against the lichen-covered rock. Madeleine combed the helmet of her hair down into her eyes and spoke up unpleasantly: “That kind of smoldering reticence’ll backfire one day, and then you’ll see.”
Ah, the novelists, so bounteously
Working innumerable registers to ring
Up what one used to
Get yammer’d into oneself gratuitously
By tiresome drunks, or out
Around the blaze of camp-
Fires! Ah, the obscene purity
Of a posit’d poetickal lineage,
The mock-eugenic heft of
It! What one’d roundly damn
In human behavior—strains immiscible—
Becomes fodder for two kinds
Of cows in some barns,
Cows in distinct and stinking
Stalls, as if some shit-
Shoveller of the future is
Opening its doors . . .
There is
Always ever only one, and
Vatic, and unform’d, and sings
Out, or perches like a Cumaean
Outside the cave we keep
Fleeing to approach, our musicking
Hissing scintillants of wild assembly.

Oh, I do not know. I think of William Gaddis’s story of Raymond Lully, known, too, as Ramon Llull, flooding into the story of Wyatt, a painter, in Paris amongst the rather noxious “transatlantic visitors”:

And the shadow he cast behind him as he turned away fell back seven centuries, to embrace the dissolute youth of Raymond Lully, and infatuation with the beautiful Ambrosia de Castello, which she discouraged; and if she seemed to succumb at last, offering to bare her breasts in return for a poem he had written to their glory, it was to show him, as he approached in that rapture of which only flesh is capable, a bosom eaten away by cancer: he turned away to his conversion, to his death years later stoned in North Africa, and to his celebration as a scholar, a poet, a missionary, a mystic, and one of the foremost figures in the history of alchemy.

Idly wondering where Gaddis, who jam-packs The Recognitions with such largely recondite data, encounter’d it. I see Arthur Schopenhauer (in 1819’s The World as Will and Representation), used “Lull” to exemplify a kind of “After great pain a formal feeling comes—” conversion narrative (is, it occurs to me suddenly, Tom Clark’s masterly “The parts of your feelings // Are starting to know a quiet / The pure conversion of your / Life into art seems destined // Never to occur . . .” a late peripatetic echo of Dickinson?) Schopenhauer:

Hence men who have led a very adventurous life under the pressure of passions, men such as kings, heroes, or adventurers, have often been seen suddenly to change, resort to resignation and penance, and become hermits and monks. To this class belong all genuine accounts of conversion, for instance, that of Raymond Lull, who had long wooed a beautiful woman, was at last admitted to her chamber, and was looking forward to the fulfillment of all his desires, when, opening her dress, she showed him her bosom terribly eaten away with cancer. From that moment, as if he had looked into hell, he was converted; leaving the court of the King of Majorca, he went into the wilderness to do penance.

Or did Gaddis dive into something like Francis Barrett’s The Magus, or Celestial Intelligencer (1801) with its romp through alchemy, the Cabala, magnetism, &c, and its “Biographia Antiqua” ranging through (amongst others) Hermes Trismegistus, Appollonius of Tyana, Paracelsus, John Dee, and the convert Lully? Beginning with a consideration by the Dutch botanist and physician Herman Boerhaave (a man biograph’d by Samuel Johnson)

“I have perused (says Boerhaave) the best part of his works, and find them, beyond expectation, excellent: insomuch, that I have been almost tempted to doubt whether they could be the work of that age, so full are they of the experiments and observations which occur in our later writers, that either the books must be supposititious, or else the ancient chymists must have been acquainted with a world of things which pass for the discoveries of modern practice. He gives very plain intimations of phosphorus, which he calls the Vestal Fire, the Offa Helmontii, &c. and yet it is certain he wrote 200 years before either Helmont, or my Lord Bacon.”

He travelled into Mauritania, where he is supposed to have first met with chymistry, and to have imbibed the principles of his art from the writings of Geber: which opinion is countenanced by the conformity observable between the two. The Spanish authors ascribe the occasion of his journey to an amour: he had fallen in love, it seems, with a maiden of that country, who obstinately refused his addresses. Upon enquiring into the reason, she shewed him a cancered breast. Lully, like a generous gallant, immediately resolved on a voyage to Mauritania, where Geber had lived, to seek some relief for his mistress. He ended his days in Africa; where, after having taken up the quality of missionary, and preaching the gospel among the infidels, he was stoned to death.

I suspect the Schopenhauer, though one concedes the impulse to lose oneself in odd and aimless figures of antiquity (Evan S. Connell does it too) against being subsumed by the dull compulsory yatter of the present “squad.” 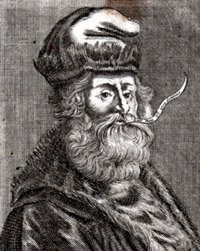