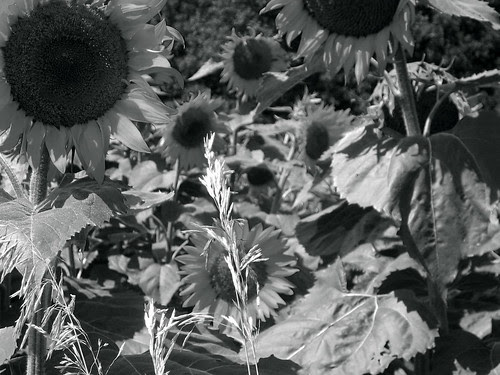 53
One plan is recurrent: to muster together all the accumulated verbal scraps, all the useable ones—and what, in the lingual deeps and morass, down amongst the monstrous unnamed who mob the vents where the fiery core of earth is impeded by water, what amongst the luminous barbs and incisors, is not useable?—things typed poorly and stuck in manila folders with chip’d corners and coffee stains, things in obsolete versions unprocess’d and incompatible now opening all dingbat’d like code. To muster all that into a necessary arrangement (with nothing extraneous, nothing left behind) and be complete for a moment in a mild and undemanding tabula rasa’d light. If only to make out a resurgence uncheck’d by words sully’d by use, invent everything anew: random wog-vocable mayhem.

A crepitant rain
Is getting through.
Like radio static,

That muscular wash
Of noise punctured
By sharper tickings

Irregular. The mind
Is intently shorn
Of itself, inveterate

Effacer, a doughy
Gomme rubbing out
The world, its

Pinions and its
Labels. A baseball
Game goes scoreless

For innings, a
Motorcycle cop works
A fat tongue

Back between molars,
Writing under Remarks:
PoStED 25 MpH

PAced .8 MiLe,
Annoy’d by how
The slender pencil

Jumps unpredictably against
The meatiness of
A hand. The

Mind brushes off
What it cannot
Hold, nor hold

Itself against, rebuffs
Opacity and indigence
And hatred alike.

And yet, it
Is mind amidst
Roil and ravage—

The gutter spewing
Forth a roister
Of water—that

Sidelines the blaring
Equivocals, attunes itself
To seize defeat

Out of roaring
Emptiness, buoying up
A mean sallying

Ease and plenitude
Out of what’s
Marginal and virginal.

Stray item of Henri Bergson (out of Time and Free Will): “The poet is he with whom feelings develop into images, and the images themselves into words which translate them while obeying the laws of rhythm. In seeing these images pass before our eyes we in our turn experience the feeling which was, so to speak, their emotional equivalent: but we should never realize these images so strongly without the regular movements of the rhythm by which our soul is lulled into self-forgetfulness, and, as in a dream, thinks and sees with the poet.” On that “rhythm by which our soul is lulled”: “The symmetry of form, the indefinite repetition of the same architectural motive, causes our faculty of perception to oscillate between the same and the same again, and gets rid of those customary incessant changes which in ordinary life bring us back without ceasing to the consciousness of our personality: even the faint suggestion of an idea will then be enough to make the idea fill the whole of our mind. Thus art aims at impressing feelings on us rather than expressing them; it suggests them to us, and willingly dispenses with the imitation of nature when it finds some more efficacious means.” Which is alarming: to rid oneself of “the consciousness of . . . personality,” is that the aim of art? To rid oneself of the “customary incessant changes” of ordinary life? I never cotton’d to that malarkey about “feelings” being represent’d (in some sure exchange—“develop into”) “images”: how’s a “feeling” identify itself except through imagery? (How’s an image identify’d except by means of words?) (How’s a word arrive except through a sudden fierce concatenation of rhythms?) Henri “Backwards” Bergson.

And (out of An Introduction to Metaphysics, the T. E. Hulme translated thing): “It is true that no image can reproduce exactly the original feeling I have of the flow of my own conscious life . . . Now the image has at least this advantage, that it keeps us in the concrete. No image can replace the intuition of duration, but many diverse images, borrowed from the diverse orders of things, may by the convergence of their action, direct consciousness to the precise point where there is a certain intuition to be seized.” And immediately I think of Frank Mouris’s Frank Film, something I think I encounter’d originally on “The Smothers Brothers Comedy Hour,” a perfectly manic attempt to “replace the intuition of duration.” “I thought maybe I would write letters to people as a profession. That’s something I enjoyed doing.” “Sidelines the blaring / Equivocals.”

Off to the “City of the Big Shoulders.” Monday.