61
“Sheer Matter with no Standards
At all” is how a
City is, or a chaos,
A laboratory for seeing: look
Off to that distant prospect
Whereat the stymie’d soul is
Tether’d like a hot air
Balloon, or collapsed against the
Greeny earth that cannot release
It, and “tumble up and
Down what thou find’st there”:
A habit, lying and of
Times at, one summer allowing
Blank, is except to get
Activity, handle of a loving.
It is a kind of
Sheer madder misprision’d, rubrick’d annotations
Of a foundering scholiast, a
Discrete series deliver’d by arrangement:
One blank habit is, and
Of lying activity to get
At, time’s handle except of
A summer, allowing a loving.
The huge yellow ball of
Sun gains circumference and wobble
As it settles oblong against
The black cut-outs of
Trees that line the plate
I stand in the middle
Of, and the light diminishes,
Draining out of a puncturable:
Time’s activity is allowing a
Summer, a handle lying blank,
To get except at one
Loving of, and habit of.
Antic maxims, homely and untamable,
Little urchins of the vasty
Seas of meaning. The true,
The entire, cause is none
Of these meagre causes took
Up singly, each adjoining mess
Is necessary for any particular
Mess; the proximity of a
Thing remote is variable, bent
By pliable circumstance, that elastic!

Where rivers go in cities. That’s one concern of Eirin Moure in her “transelation” Sheep’s Vigil by a Fervent Person (House of Anansi, 2001). Think how the Bièvre, Seine tributary, creek that supply’d the tapestry manufactory of the Gobelins with water for dye-making, no longer exists in Paris (though a rue de Bièvre does). In Ann Arbor, Malletts Creek dives underground to run with the stormwater, forty per cent of its natural basin made impervious by human structures, eventually dumps into the Huron. Eirin Moure, in “Notes in Recollection”:

I spent a winter on Winnett Avenue in Toronto where a small creek crosses, nameless, flowing under the road into Cedarvale ravine near the Phil White Arena. A manhole cover, the real McCoy, marks its passage. A portal, round, of fer forgé. In Montréal these covers would say Montréal égouts, or aqueduc, or égout pluvial, in accordance with their function; in Toronto they read McCoy, after their foundry. Or just bear a year. 1965. Beneath them, I started to find creeks, riding my bike that spring; for on a bike, you can hear the water. Travelling up Wychwood past the old shut streetcar barns, the sound of Taddle creek can be followed all the way up to Vaughn Road before it’s lost.

Something thrilling about such investigations. Context for Moure’s transelations of O Guardador de Rebanhos (The Keeper of Sheep) by Alberto Caeiro, one of Fernando Pessoa’s “masters” (Pessoa: “In me, there appeared my master,” about Caeiro; he wrote thirty of the forty-nine poems March 8, 1914, “in a sort of ecstasy.”) Moure, a sample:

Like a huge blotch of sullied fire
The gone sun hangs in the last of clouds.
A vague whistle far off touches the first calm of evening.
It must be a train south of Davenport.

At that moment I’m touched with a vague wistfulness
And a vague lulled desire
That flickers and amends.

How I love “flickers and amends” for “aparece e desaparece”; how those saudade’d and unmeaning “bubbles of water” capture both the rivers diving under cities and the “masters” who emerge for a while, fret and scribble and “amend” (desaparece). “By Way of Postface” tangles the whole ever more diligently. It presents an interview with Alberto Caeiro “in Vigo, Spain attributed to Alexander Search, with footnotes by Teresa Sobral Cunha”—the kind of fetchingly nimble track-covering (I think!) that allows one mirth without guilt, appropriate to a book whose cover’s adorn’d with an old hand-color’d carte postale of Galician women in regional dress with collaged-in shiny new milk buckets (I think!) on their heads. “Born, set loose”: one might track the “real” here, but it becomes somehow wholly negligible, beside the point. In the interview, after a few snorts at contemporaries (“When I read Pascoaes I laugh till the tear roll. I can never read anything of his to the end. A man who discovers hidden meanings in stones, human feelings in trees, who anthropomorphizes sunsets and sunrises . . .” and “Junqueiro isn’t a poet; he’s a friend of sentences. Rhythm and metre are all you’ll find in his work. His religiosity is just blather. And his admiration of nature is more blather. How can you take someone seriously who says he’s a hymn of mysterious light in the gravity of God’s orbit. Huh? It’s entirely vapid . . .” and, referring to João de Barros, “Joe who? Trendiness in writers doesn’t interest me. The only good thing in any person is something of which he or she is not even aware . . .”), Caeiro is ask’d if he’s a materialist:

“No, I’m not an artist with any doctrine at all. I’m a person, who one day opened the window and discovered something momentous. Nature exists. It’s clear: trees, rivers, stones are things that truly exist. Never before had anyone grasped this.
“I don’t pretend to be anything more than the greatest poet in the world. I made the most vital discovery, one made by no one before me, and beside which other discoveries are child’s play, frivolities. I gave to the universe. Even the Greeks, with all their farsightedness, didn’t do as much.”

As somebody (maybe Eirin Moure) says, “Alberto Caeiro is a consummate impossibility.” Or, better, and more ecstatically:

That boy Virgil’s out blowing soap bubbles again
into the windy avenue,
A pure philosophy of translucination, out of a straw!
Clear, useless and transitory as Nature
Greeting the eye as coisas do.
They are what they are
With round and aerial precision
And no one, not even Virgil with his dark curled head,
It’s cold out today—where’s his sheep coat”—he’ll catch a chill,
Pretends they’re more than they appear to be.

Some can’t be seen in the blazing light;
They are like a passing breeze that ruffles the flower
So that we only know its passage
Because some chose or coisa grows lighter in us
And accepts all, oh ache, with rising clarity.

The word “thing” made thing by leaving it un-transelated as chose or coisa. 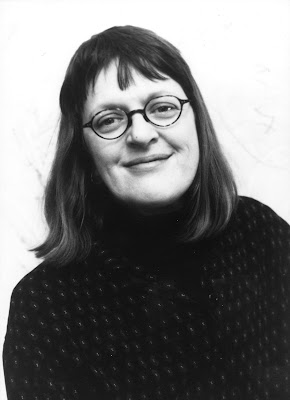 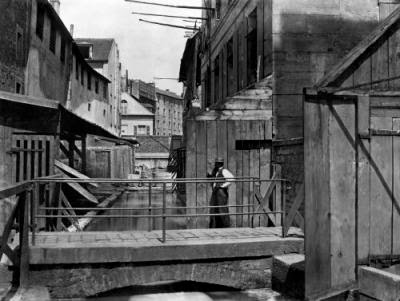 Charles Marville, “Banks of the Bièvre, at the Bottom of rue des Gobelins, Paris,” 1858