He must be something more than natural—even supernatural. Nature will not speak through but along with him. His voice will not proceed from her midst, but breathing on her, will make her the expression of his thought. He then poetizes, when he takes a fact out of nature into spirit—He speaks without reference to time or place. His thought is one world, her’s another. He is another nature—Nature’s brother.

And thinking how William Carlos Williams’s lines in Spring and All (1923) is rather that intensify’d: “Poetry is something quite different. Poetry has to do with the crystallization of the imagination—the perfection of new forms as additions to nature—Prose may follow to enlighten but poetry—” (I like how the crystallography inserts itself into Williams—pure Thoreau.) (How likely it is that either a) Thoreau is riffing against something Emerson says somewhere with increased clarity and concision—and everybody knows it except dilatory Emerson-reader me—, or b) there’s a precedent for Williams’s pronouncement “somewhere” plainer—Williams with ’s poetries of human dynamism—“out of the mouths of Polish mothers”—hardly strikes a Thoreauvian “stance.”

Dallying with the Williams of Spring and All now that it’s propped open here. That next paragraph: “Is what I have written prose? The only answer is that form in prose ends with the end of that which is being communicated—If the power to go on falters in the middle of a sentence—that is the end of the sentence—Or if a new phase enters at that point it is only stupidity to go on.” And thinking (again) of Ron Silliman’s ingenuous smokescreen of an opening to “The New Sentence” in Talks (Hills 6/7)— “The sole precedent I can find for the new sentence is Kora In Hell: Improvisations and that one far-fetched”—neatly dodging Pound whose imagistic juxtaposing is everywhere therein—, isn’t it precisely the Williams “faltering” that Silliman exploits (ad tedium) claiming for the sentence both measure itself (“Sentence length is a unit of measure”) and (in “What”) capable of measure within itself (“The line tends to scratch (the advantage of prose is / or, I should say, may be / not that it has no line—each word, each letter / holds the line—but / that its linebreaks being hidden / demands the reader work).” (Signs of rhythmic infelicity took for scriptible reader-empowering “difficulty.”) (Somewhere in “®” Silliman manages to echo Williams’s version of the sentence precisely: “The impulse of the sentence is to extend, never to close off.”)

Ah, October, the colding nights, the between-season ambivalence tilting its rakish hat at all one does. Is there something like “anxious indifference”? That’s rather what I am feeling. And now I note that Morty Sklar of The Spirit That Moves Us is out with a sort of selected call’d The Smell of Life. Book copy identifying it: “natural-voice aesthetic of the Iowa City Actualists” and Sklar as one of said Actualists—“seminal writer and editor”—and though I confuse The Spirit That Moves Us just slightly with another Iowa City “sheet” call’d The Lamp in the Spine somehow the copy (written by Sklar) points out just how inept “our” categories and histories be. Voice versus the signifying monstrance of the stubby pencil squeezed up in a fist. Iowa à l'époque (’seventies, roughly) was full of Williams-Creeley-Berrigan-Grenier imitators (I think “little one-hinge quotidian stoner poems”—see Grenier’s “nobody to talk to anything about”—remarks as literature), decidedly not (on surface) viable kin to the writerly leanings of the language poets. The common ground: ambivalence to the teeming and evident artifice of the epiphanic constructs of “the others” (the majority), and its heavy commitment to metaphorickal transformations: think of Charles Simic’s “Fork”: “This strange thing must have crept / Right out of hell. / It resembles a bird’s foot / Worn around the cannibal’s neck” and how it culminates in implicating the reader—who becomes some odd, implacable raptor: “like your fist . . . large, bald, beakless, and blind.” Bah.

Another Friday on the road. Alors, à lundi. 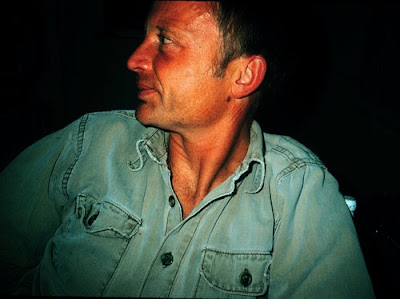