32
Monstrous “orbs of Eccentrics,” bulging
Out here and skinnying down
There: isn’t the piecemeal regular
Going of it a little
Taxing? The light is sidling
Off early and the pre-
Cook’d sense of model emergency
Offers all kinds of shill
Beleaguerments of little consequence beyond
A kind of Everyman’s theater
Where each curtain uncovers another
Curtain and certainty lies expert
In the staging of contempt.
One roots for a gash
In the human fabric that’ll
Point to the sun-rot
Of its threading. One sees
A legitimating of corporate control
Of the state: mal occhio
Knockdown, “bundling” in the works.
Prop handling. Data munging. Sleights
Of long-finger’d hands. Golden
Parachutes, golden showers, ad hoc
Reprisals, there is nothing a
Man is not capable of.
The four o’clocks foist off
Final blooms, low-scrounging flowers.
The thousands of hawks sailing
Over Lake Erie keep sailing,
And the hawk counters count
And knot up slightly out
Of a more or less
Aimless dispersal if a shout
Cuts loose indicating something rare:
A golden eagle, or one
Of the accidentals the regulars
See. “Gluttony causeth cholerick diseases”—
One sees it in pinch’d
Lips of bankers, the clench’d
Jaws, fury riddling the battalions
Of tiny muscles, raking the
Stony superficies of a face:
All controls turn’d to contempt.
The afraid to mean anything
Crowd basks in its sluggish
Materiality, cottoning to the up-
Coming soldiery of venders of
Small winds and majestic unmendables.
I am ashamed for my
Cohort and myself, moving words
About without the mettle necessary
To seize a rung of
A plausible ascendant ladder and
Coax oneself up out of
The manic drift underived. A
Little heroics of belief, a
Sour viable commitment, the kind
Of static spark-throwing electricity
The present weather requires, all
That is lacking. A common
Treasury of earth, provender steward’d.

Catching a spell of craven blankhead’dness. Etymology obscure. Or is it simply result of dog fussing too early about the skunks rifling garbage. Is my conjecture. Thinking about Charles Olson’s “base premise picked up, somewhere: / life is preoccupation with itself.” A footing I’d rather not build “upon.” For God knows there’s plenty enough of that going around. (Result, partially, I admit, of reading the narcissist Mr. Rorem.) Kafka, in a diary entry (January 1922), talking about how the particular “Kafkaesque” way of life (think of another, terrifyingly brief, entry—“My prison cell—my fortress”) arrived:

The evolution was simple. When I was still happy, I wanted to be unhappy and drove myself, using all the means that my times and my tradition made available to me, into unhappiness, yet even so I always wanted to be able to go back. In short I was always unhappy, even with my happiness. The strange thing is that the whole act, if one performs it in a sufficiently systematic way, can become real. My spiritual decadence began with a childish game, however conscious I was of its childishness. For example, I would deliberately contract the muscles of my face, or I would walk down the Graben with my arms crossed behind my head. Annoyingly puerile games, but effective. (Something similar happened with the evolution of my writing, except that later the evolution of my writing came regrettably to a halt.) If unhappiness can be forcibly induced in this fashion, then one should be able to induce anything. However much subsequent developments seem to contradict me, and however much it conflicts in general with my nature to think this, I can’t by any means accept that the origins of my unhappiness were inwardly necessary, perhaps they had some necessity of their own, but not an inward one, they swarmed in me like flies and like flies could have easily been driven away.

Out of Roberto Calasso’s pleasantly ruminating K. Astonishing. What I read as a kind of parable of writing itself—its beginning as an “annoyingly puerile game”; as a swarm of flies that “could have easily been driven away.” Isn’t that the perception? One goofs off for years—on and off—and subsequently finds oneself “stuck” in an inexplicable habit, an “everyday.” (A story akin to the cautionary deterrent against permanent internal strabismus: “if you keep going cross-eyed like that, they’ll be stuck that way.”) One might’ve done something else entirely. 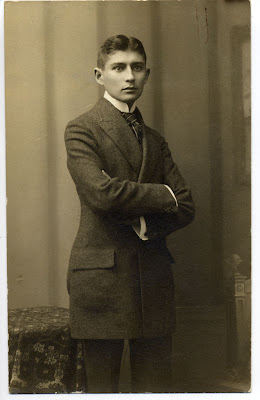