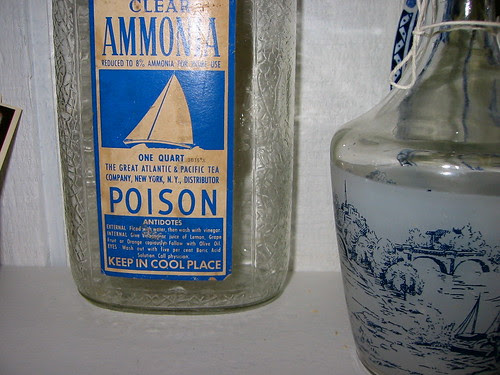 30
A copy of Adrienne Monnier’s Rue de l’Odéon with its pages uncut beginning at the “Préface au catalogue de la bibliothèque de prêt.” A crankable green radio with built-in light. A capped bottle of one hundred acetominophen caplets, minus ten or twenty. A notebook containing the date 15 September 1999 and the word “haibun” written in pencil, and “The Green Edge of Yesterday.” A reddish rock (with faint lines of yellow) about the size of a darning egg. A canvas bag mark’d “Bookpeople 1971-1991.” A paperback copy of The Blue Devils of Nada. “Flat space and overlapping planes, the list as cubist.” An upright filing box assembled in Brooktondale, NY of six quarter-inch plywood scraps, containing “rough drafts” unsort’d for a dozen years. My Life and Loves in Greenwich Village, by Maxwell Bodenheim. Walter Pater saying, “Experience itself is the end.” A calendar unturn’d since February, picturing Audubon’s “Great Northern Diver, or Loon.”
The “chancequarrièd, selfquainèd rocks” of
A listless moment offer’d up
To the twenty-first century
With its arriviste burn of
Consequence, its ravaging accelerants toss’d
Into the sere ongoing fury,
As if an uncontainable human
Rage for regular self-fuel’d
Annihilating ruses staked out implausible
Claims, and were heartily met.
So many lies now “lie
Tumbled-to” we’ll never get
An assessment that’s not flaw’d
By power, by power’s incendiary
Itch for power, the spur
Digging a ragged bloody hole
In the horse’s flank, horse
Pitching itself off a sky-
Scraper’s canter’d roof. I cannot
Keep a momentary journal, my
Burst spleen against the world-
Smotherers accepts naught of the
Dignity of measure, lashes out
Incommensurably numb. Me, I am
The fuckingest king of the
Rainy country, midge-rich and
Indecent, and if my pecker’s
Mistook for a zucchini, I
Bore myself with a dog
Or any other available beast.
Nobody’s happy hereabouts, not the
Gibbering factions, not the people
Diving off the balcony at
The buff end of idiotic
Ballets, keeping up a front
Whilst under assault by cruel
National maladies. There’s girls around
Who’d vote for any cute
Butt, and did, and now
Impudently collect toiletries to send
“The troops,” a squalid bunch,
Killers hired to extirpate “corrupt
Elements” out of a bloodbath.
Old Romans with oily stentorian
Voices commandeer the few youths
Who join’d for a chance
Out of hebetudinous ghetto cadaver’d
Jerkwater jobs, and back home
Flows the tarnish’d blood of
Lethe: memory gone incommensurably numb.

In Chicago a couple of days back I stumbled into a copy of Nicholas Moore’s Spleen (Menard, 1990). A reprinting of an earlier edition (1973), its complete title being Spleen (Le Roi Roi Bonhomme): Thirty-one versions of Baudelaire’s ‘Je suis comme le roi . . .’ The book is load’d with surrounding material: a preface by original publisher Anthony Rudolf, a foreword by Roy Fisher, a note call’d “On the Impossibility of Translation” by Moore himself, and a moving afterword by Peter Riley. The circumstance of Spleen’s coming into being is stunningly odd. Anthony Rudolf:

Spleen started life as an entry in the 1968 Sunday Times Baudelaire translation competition judged by George Steiner. Steiner drew attention to an extraordinary multiple entry, thirty-one versions of the same Baudelaire poem, obviously by the same hand and under a large number of pseudonyms, typed in brown or green ink and sent from various addresses all over the country. It emerged that the author was Nicholas Moore, who in the 1940s had been as famous as Dylan Thomas but who later disappeared from view. His last full-length book of poems had appeared in 1950 . . .

Some of the pseudonyms: “Harrowsmith Blamesworthy, Phil Okes-Box-Wunnayay, Rosine MaCoolh, H. N. (Helga Nevvadotoomuch).” I recall mention of Moore somewhere by John Ashbery, one of the overlook’d odd ducks he’s prone (thankfully) to point out. What little I know: b. 1918, d. 1986. Son of G. E. Moore, the Cambridge philosopher. (Here I recall with a shudder spilling blue ink into a James McConkey’s copy of a book by Moore, borrow’d for reasons of preparing a report on Moore in a relation to something wholly forgot.) Moore, in an “Autobiographical Note (1973)”: “From 1950 (approx.) to 1964 engaged unprofitably in various forms of horticulture (including writing a now out-of-date book on The Tall Bearded Iris). Became ill with a gangrened foot and was found to have diabetes.” Peter Riley reports Moore’s circumstances c. 1984:

I found a genial, brusque and quite proud man in his late sixties living in a wheelchair in a small ground-floor maisonette deep in suburban Kent, where he had been since 1948. Steely grey hair, glasses, brown jacket, wiry determined face, rather twangy “educated” voice with a slight London cadence, a small round body enthroned in the chair. The place seemed to be a total disaster, but acquaintance revealed this to be “organised squalor.” The living room was like a miniature mountain landscape. There was a valley-like route for the wheelchair, with turning-bays, from door to fireplace with a branch to the table and work-desk, through precipitous mounds of domestic substance—books, newspapers and magazines, records, papers, old chocolate and cigar boxes, seed packets, wine bottles, and general detritus, most of it with something split over it and the whole under a coat of brown dust from a continually smouldering coke-fire. An aroma as of decayed perfume. Somewhere under these heaps were the furniture of the premises and about three thousand poems typed onto sheets of thin quarto paper.

Out of the three thousand Riley’d edit a selected poems call’d Longings of the Acrobats (Carcanet, 1990). Moore loved jazz (Roy Fisher mentions how, after Moore’s disappearance in the early 1950s, “the only indication I had of his continuing existence was, over the last ten or fifteen years of his life, the frequent mention of his name on the BBC Radio Three weekly Jazz Record Request programme; he was probably its most persistent client”); the translations (and some of the pseudonyms) make much reference to it and its players. (There is, too, an palpable animosity toward the newer “pop” culture—The Beatles, &c.—recalling Jack Spicer’s similar bent.) What Riley makes evident (and the onslaught of Baudelaire versions of 1968 testifies to): Moore’s refusal to stop:

He could hardly see at all now, but he learned forward in the wheelchair till his nose was an inch from the typewriter keyboard and letter by letter, very slowly, hammered out the poem already completed in his head. . . . When the poem was typed it joined the heaps, but he could always find a poem when he wanted it, or a jazz record or a neglected cigar, as least those less than ten years old, by a kind of opencast mining. The secret was not to stop. He ordered more jazz records, more claret, more crocus blubs, conceived another poem, always looked forward to “getting better” and to being acknowledged for his work. A wodge of fluff half an inch in diameter adhered to the stylus. More music.

A couple of Moore’s versions, preceded by the original:

KING OF THE SKIDS

(“In the evening comes your harlot
And on Wednesday it’s your charlat-
an analyst;
He’s high up on your list.”
—Ray Stevens: Mr Business-Man)

I am like the Father-Figure of a haar-damp island,
Wealthy, but impotent; still young, but dry, and
Unable to stand my psychiatrist’s bon-mots
And equally hung with dogs or chasing does.
None of it’s fun. You play, but you’re not winning.
Nor is your family’s death a cause for grinning.
Your favourite group’s way-out howling distracts you
Not one small wit from the illness that so wracks you.
Your bed, beflagged with iris, is a tomb.
Your whores—for whom each Business-Man’s a bomb—
Can’t find postures obscene enough to cull
The slightest smile from your womb-naked skull.
Your banker with his smoothest manner can’t
Gift you the kind of credits that you want.
Roman blood-baths; Picasso’s Guernica—
Both potent pills for the old pleasure-seeker—
Can’t warm your corpse, where, bloodless, seethe like Lethe
The green tides of an unborn lethargy.

I’m like the kind of rain-douched Scorpios,
Quite rich enough and game to take a toss,
Hater of journalists and hoi polloi,
Not fond of dogs or animalculi.
I can’t get really pleased at sport or journals,
Nor at Greeks kept captive by the colonels.
Maria Callas’s dramatic yell
Finally didn’t serve to make me well.
My eiderdown, embossed with antique flowers,
Reminds me of those sad Egyptian towers
Where mummied princes lie beside their drabs
Unsmilingly with dead dogs and scarabs,
Where all the wealth of golden ornament
Can’t raise the proud Egyptian in his tent.
Though glories of our blood and state contrive
With bloodbath frequently to keep alive
Old roués, none can warm this skeleton
Whose green blood, Lethe-like, just pooters on.

For all the mockery and tomfoolery, Moore’s inclination is, it seems, to make something serious (as Fisher says, regarding the jazz references in Spleen, the poems, for all the sass, are “affectionate and honorific; each is a talisman against the universal slither.”) Moore himself, though, claims the poems “grew not so much from a wish to enter the competition as from a disagreement with part of Dr Steiner’s thesis . . . namely that it was a good thing that so many modern poets were interested in translation.” Which is mostly preface in order to say both that translation cannot be done and that a poet ought be the last to proceed in it. Moore: “The ideal translator is someone who is sensitive to words and ideas and can put himself into the mind and place of the poet he is translating. But the poet is not that kind of person. He is more likely to be doing the opposite, to be putting the poems translated into his own mind and circumstances, and by implication at least, the author of it too.” Not Moore filling Baudelaire’s espadrilles, but Baudelaire becoming Moore. So that translation becomes a kind of license to mutate, to fit the material to the present. Which is Pound’s “frigidaire patent” in Sextus Propertius. Which is how the war in Iraq gets into my Baudelairean romp at the end of “The Everyday” excerpt above, that “national malady,” or the girl who admit’d she voted eight horrific years back for little Bush because of that “cute butt.” 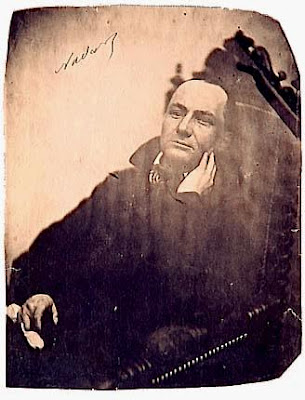