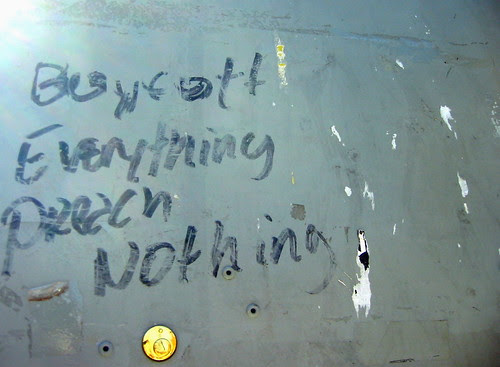 “First thing, figure out how to read the book. Or how you plan to read the thing.” Kevin Davies’s The Golden Age of Paraphernalia (Edge, 2008) is a model book. I am thinking of some other books where “some assembly required” might be stamp’d up front: Julio Cortázar’s 62: A Model Kit or Hopscotch, or B. S. Johnson’s 1969 The Unfortunates or Marc Saporta’s c. 1963 Composition No. 1. All works of fiction, all demanding (eliciting, or offering) a kind of “choice” to the reader in the sequence (order) each is read. (The latter two were publish’d as loose leaves in a box in order to facilitate (encourage) such a reading.) Davies opts for a variety of visual cues, markers of a particular piece’s continuation (which is then interleaved amongst others more or less throughout the book). Here, for a clarifying swat, is the “Contents” page:

I read a huge sneer-dripping dollop of that as kiss-off talk: smarm-laced bad attitude, high-ironic double quotes, scatological (or “optical”) mockery, dirty joke-obsess’d (one-eyed anything is a guffaw in some quarters), rock-’n’-roll-monkeys in Chuck Berry outfits doing security patrol, outrageous stuff. A sort of anti-book in the making. The wrap-around cover photograph by Ben Friedlander refines the notion: the front of the book all banal asphalt cemetery road edging out some minuscule usual kitsch of fake grave flowers, the back presenting a kind of over-sized lug of Davies standing meaninglessly (unreadable the expression he’s wearing—serious mourner, angry young man, indifferent stoner, Kaspar Hauser idiot boy), a forlorn U.S. flag wagging tepidly in the background.) No damn blurbage, thank God, no moronic “copy.” What one figures out: The honest-to-god “floaters” are “Lateral Argument” (previously publish’d in 2003 as a chapbook by Baretta) and “Duckwalking a Perimeter,” both spanning the allot’d pages, though lacking titles in the book’s attempt to muddle the boundaries of its pieces. The “•” refers to pages (or parts of pages) where the lines (sentences, fragments) use that “floater” for a kind of über-punctuation mark; similarly, the “|”. The “#s” refers to the intercalated (and number’d) sections of “One-Eyed Seller of Garlic.” Got it?

A lengthy explication, maybe I’m just the most bone-head’d bonze in saffron hereabouts, accustom’d to flipping a book open to sample it here and there without having to be clout’d upside the head by a new semiology (code) and a structural puzzler. Truth is, maybe it doesn’t even “matter” all that much: the fluidity (porosity) of Davies’s work succeeds in mimicking both the “click-through” (and “back”) reading style of those (all of us) who dog the Internets, and the audio-strata shifts of voices in a crowd, radiophonic (telephonic) bombardment in a world of constant hanging visual (aural) assault. Here: some sequential pages, beginning amid a number’d section of “One-Eyed . . .” (“—” marks a page-break):

arrived at only by people with cars
and those who are
already there. • What happens if
one pulls this
lever? • Orangish
see-through hazmat togs afire in the subway
tunnel • received
through the nose, these archipelagos of consolidation, landmarks of third-
party posture
NEOLIBERALITY
made skid marks on the rural
route, advancing on
millions • Hazardous,
haunted
public waste • The same

Rubbed gently
on the afflicted area of the policing instinct
Defunct as a church | in Augusta
after the rage rodeo
And then | to sleep, standing
like a horse in the mud room
Flaking | all over the visible nauticality

until someone stopped offers cash as for apples
Simple [Esperanto] sentences
. . .

Though the first few lines seem to “belong” with (connect to) some of the intervening movements, all that is a kind of static (with its own static and misleads and hesitancies within): the intend’d sentence trajectory is “Stand / at the side of a tertiary road // until someone stopped offers cash . . .” The whole, in its jostle and jag, its loud call to attend, to refuse to allow one’s attention to plummet into the usual listlessness, functions with impeccable formal force, enacting the cacophonous compendium it musters.

Davies’s is a largely speech-based poetic. (That is, in its attention to the floods of demotic particulars, the oddball things people got to say, and the bang’d-together ways they say it: “I AM THE / GLOBAL POSITIONING SYSTEM, / ME” and “Layman / P’ang, whatta guy—“I’m the poorest man on earth”—and his daughter so / elegantly flipping him off.”) In one of a slight series of literary sass-backs he says: “Remarks are literature.” (Others: to Stevens, “I PARKED A CAR / IN TENNESSEE”; to O’Hara “the / animals join us / not // when they contemplate laser eye surgery / or when they perform the yoga of carrying things around New York”; to Wordsworth, “Hard rain, flooding // of the abandoned Recluse / Bill / deletes Dot”; to Bashō, “Infinitesimal / antimatter frog / in infinite-series universe— / Plop”; to Ron Silliman, “Plants need water. That’s all: / A sunny ledge. Not / not this. What, // this then?”) Other voices I detect the strains of: a kind of Vonnegut deadpan black humor (“Our prosimian ancestors / less than one ounce, / ankles smaller than rice grains. / Scooped up and eaten by owls. / Having just done the / wild thing.”) Pynchonesque paranoia: “Glassine envelopes on the sidewalk each morning. /. . . / A stylized, hypnotic performance of the data is all we ever were, right?”

What The Golden Age of Paraphernalia posits is a supposed world of “radiant connectedness,” a world beyond narrative ploys (“your life has no plot so stop narrating”). Except: it refuses to mete out the necessary credence in that world, the connectedness is a foil, a spark-spitting short in the circuitry, sign of dystopia. Here’s the blurbage after all, the mock self-assessment laid in to the pages of “Lateral Argument”:

And each category has dozens of subcategories
and each subcategory scores of its own, all
meticulously cross-referenced, linked, so that each square
centimetre of surface everywhere, pole to pole,
from the top of the mightiest Portuguese bell tower to
the intestinal lining of a sea turtle off Ecuador, has
billions of words and images attached, and a special area,
a little rectangle, for you to add your own comments.
It is the great work of a young-adult global
civilization, a metaliterate culture with time on its
prosthetic tentacles, at this point slightly more silicon
than carbon, blinking vulnerably in the light of its own
radiant connectedness.

It is the humor—self-deprecating, alert, winsomely falling into hints of pathos unobstruct’d, vulnerable to humor’s obverse (which is death)—that makes the book truly radiant. A glimpse of it here, in a line or two I read as address’d (at least partially) to Ed Dorn: “The world / to come has come and gone, Ed. Do you have any idea how cheap memory / is now?”

16
Post-rain ammoniac scent off
The earth, wash and dredge
Up out of its hold
Of mighty schools of Pleistocene-
Era fish macerated under repeat’d
Glacial onslaughts. Everyday stealth of
Pre-history’s stench. The rain
Combined with a cold wind
And blew the curtains in
And out the window all
Night. Vaguely hydraulic planetoidal hum
And a voice: “The academy
Of the foutu is opening
Its doors.” Or drawers. In
The lane a giant saber-
Tooth’d tiger brought down a
Compliant antelope, willingly deposit’d it
On the doormat. Myra and
Jimmy unburthen’d the corner grocery
Of its Skinny Cow beverages.
A taciturn minister walk’d off
Into the hills east of
Here and just kept going. 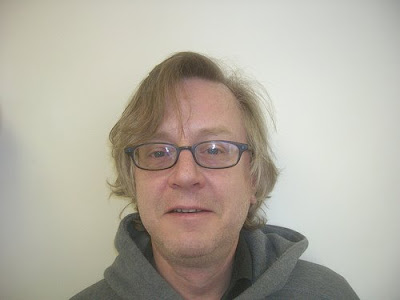