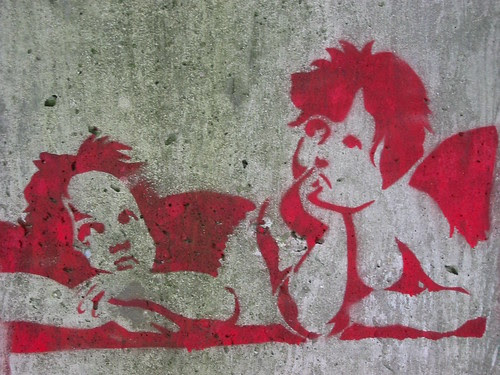 12
The nature of—one of the definitions of—a strong voice is that it inflects (infects) not only what comes next, it forces a re-reading of what’s prior. Thus, if one, skimming, sees the opening lines of “Syringa” (out of Houseboat Days)—“Orpheus liked the glad personal quality / of the things beneath the sky”—and turns back to a number’d section of “Europe” (The Tennis Court Oath) to read “‘Beautiful morning for a flip miss,’ remarked the mechanic in brown overalls. ‘Are you going up alone’” (sentences nigh-assuredly lift’d out of William Le Queux’s Beryl of the Biplane, the 1917 British detective novel Ashbery legendarily found chez one of the Seine-hugging bouquinistes and “cut up” for content), one reads the stol’n verbiage as sheer impeccable Ashbery. (Though it is entirely possible other strong “noise” ’ll get into a formerly clear channel, too. Rereading “Two Scenes” (Some Trees) I begin to note a distinctly hip-hop texture to the second:

A fine rain anoints the canal machinery.
This is perhaps a day of general honesty
Without example in the world’s history
Though the fumes are not of a singular authority
And indeed are dry as poverty.

13
Ashbery’s formal restlessness (I think of “Her tongue from previous ecstasy / Releases thoughts like little hats.”) In Some Trees: pantoum, sonnet and sonnet sequence, eclogue (with “shepherds” “Cuddie” and “Colin”), prose poem, canzone, sestina, the Audenesque (or Edward Lear) “The Thinnest Shadow” (“He is sherrier / A sherriest. / A tall thermometer / Reflects him best.”), the mock lecture of “The Instruction Manual,” the nth degree anaphoric catalogue of “He,” the terribly mock-Stevensesque “Le livre est sur la table” (“The young man places a bird-house / Against the blue sea. He walks away / And it remains. Now other // Men appear, but they live in boxes.”) If an examination of mid-’fifties poetry books’d verify little exceptional in that (though the “reach” for the pantoum’s out of the ordinary), the difference scuttles in with the saucy attitude of the epigone (see “It is late to be late,” in “Answering a Question in the Mountains”; see “Don’t ask me to go there again,” in “Chaos”; see “You want us to come back, but it is too late to come back, isn’t it? / It is too late to go to the places with the names (what were they, anyways? just names),” in “And You Know.”)

14
That canzone, a doubtful thing in English. One stanza: “The sprinkling can / Slumbered on the dock. Clay / Leaked from a can. / Normal heads can / Touch barbed-wire grass / If they can / Sing the old song of can / Waiting for a chill / In the chill / That without a can / Is painting less clay / Therapeutic colors of clay.” Completely reminiscent of O’Hara’s “At night Chinamen jump / On Asia with a thump”—and of Ashbery’s own splendid (and repeatable) assessment of what O’Hara’s up to: “trying on various pairs of brass knuckles until he finds the one which fits comfortably. It is not just that it is often aggressive in tone—it simply doesn’t care.” Even if Ashbery’s provocations come off with less aggression, he is, like O’Hara, “amusing himself, another highly suspect activity” of the age.

15
Isn’t Ashbery a “poet of ideas” in some sense? Think of “All beauty, resonance, integrity, / Exist by deprivation or logic / Of strange position,” that rather staid posed remark that opens “Le livre est sur la table. Pure intellectual argument regarding the limits of representation—how “truth” is always partial, existing only “by deprivation.” It is a problem Ashbery returns to often—the worrying of the something that is always “left unsaid.” In “The New Spirit” (Three Poems): “At last there is the sense of destiny, the one thing that never could have happened, but even as its word fills your mouth you realize the terrible things that are left unsaid: what happens after that.” And in “The Recital” (the final piece in Three Poems): “No longer is there any question of adjusting a better light on things, to show them ideally as they may never have existed, of taking them out from under the sun to place them in the clean light that meditation surrounds them with.”

16
That is, the question of formal means gets thoroughly diddled even so early “on” as Some Trees. Même temps, Ashbery troubles the veracity (possibility) of representation. See “Illustration”: “Much that is beautiful must be discarded / So that we may resemble a taller // Impression of ourselves.” Sturdy kin to Barthes (in The Pleasure of the Text): “That is what representation is: when nothing emerges, when nothing leaps out of the frame: of the picture, the book, the screen.” (In “Europe,” the problem is reduced to its wry core. One section reads in its entirety: “mirrors—insane”.) Is the clearest expression of the dilemma (that of the gap, the disjunct, the “leaping out,” the supplement—all stubborn versions of the refusal of the suborned) in “The Picture of Little J. A. in a Prospect of Flowers”?

Still, as the loveliest feelings

Must soon find words, and these, yes,
Displace them, so I am not wrong
In calling this comic version of myself
The true one. For as change is horror,
Virtue is really stubbornness

And only in the light of lost words
Can we imagine our rewards.

17
Demotic, goofy, “Popular Songs.” Ashbery’s high gumption for the “low.” “That summer / (“The worst ever”) she stayed in the car with the cur.” Or, “all the gaga flowers wondered.” Or, “The sun pissed on a rock.” Allowing a necessary porosity, soaking up all that “leaps out of the frame.” Better, being soak’d up by it: “Darkness falls like a wet sponge.” Or, “you and I / Are suddenly what the trees try / To tell us we are: / That their merely being there / Means something.”

18
Missing out of the Collected Poems 1956-1987—here’s what notes ought provide, original reception context matter—W. H. Auden’s original (somewhat begrudging) introduction to Some Trees, select’d by him for the Yale Series of Younger Poets. (Is it Auden’s singling out of “The Instruction Manual” that’s made that piece something of an anthology standard? Not, I’d argue, a typique Ashbery, though “easy” compared to some.) Isn’t it still a worthy admonition, Auden’s, to avoid the “manufacture” of “calculated oddities” (I’ll skip the broadside against Flarf ). Auden:

If in the eighteenth century, with its interest in the general and universal, the danger for poets was a neglect of the singular, the danger for a poet working with the subjective life is the reverse; i. e. realizing that, if he is to be true to nature in this world, he must accept strange juxtapositions of imagery, singular associations of ideas, he is tempted to manufacture calculated oddities as if the subjectively sacred were necessarily and on all occasions odd . . . It is not surprising, then, that many modern poems, among them Mr Ashbery’s entertaining sestina “The Painter,” are concerned with the nature of the creative process and with posing the question, “Is it now possible to write poetry?”

23
A personal note: market “savvy”
Adding up to a lunch
Hour lap dance, NASDAQ boy.
All night Big Cap out
Riding the range, looking, he
Warrant’d, for rustlers, or
Rattlers. History is the term
Gossip turns, you bloodless pronoun
You. One thinks it “deucedly
Sweet,” the yellow’d novel one
Is reading, the coolish air
Slipping in fluttering the gauzy
Curtains, night a perfect sequel
To a well-wrought day,
Earn’d, in a sense, though
Just now the expenditure seems
Without destiny. “We talked about
America and how nice we
Both were.” Loud autumnal fly
Roaming the room. The theatre
Of my volubility is looking
For a way of capturing
A kind of lyric leakage,
So button’d up of late
Like an admiral or a
Boulevardier. One pitches oneself into
The divagatory bustle only to
Achieve “a place where I
Would not have to bring
Myself,” where rumor and hearsay
Slough down canny and one
Is like a slave with
Its tongue cut out, sung
By the divest’d exuviae of talk.
Equity strategy denial is the
Only crucial benchmark lending rate
I rate that’ll stem the
Collateral I refuse, and to
Stave off what corpulent mismanaged
Beast waiting to be fed?
The winds shift rapidly now,
And the grifter works the
Larcenous street, buzzer in pocket.