31
All the clouds assembled and push’d down into a pot to make a semblance (removable) of what the pot contains. “Narrative bickering.” All in the shape of containment, comedic for being borderless. One revs in the soup, trying to exceed the immediate, trying to tangle with a slippery array of verbs: all discourse’s cuings-up. Sound of a dog lapping “at” water. Incongruity marking the jut of the line’s failure to turn, its obverse tendency to trail off aimlessly into weed-stem’d fields roistering loud with the dry susurrus of insects. A voracious match. A voracious match point. “Avid for it.” The purse of lips signing a document with remedial focus. Initial encounter with “execrable” led to my aligning it with “crabbed.” Upcoming realignments in the housing sector. “Asset grab.” The collaborative logic of essence and the beating human heart. “On edge.” Syntactical gaffes allow that permutation to beaver its way “in the swim of things” up to a dry “spot” under that heap of branches that looks like a total loss. “Up for a ways.” The code is broken, meaning specific occasions of regular temporal disorder (which is speech) become markers for inspecific evasions of utterance (which is writing). “Clowns the issue.” Working against dispersal of meaning brings one suddenly around a bend: the audacity of completeness in a vista glimpsed. Noting, with a peremptory shrug, matter-of-factly, one signature bound in upside-down in The Orton Diaries. “Bravo the farrago.” Early in the day, the peristaltic contractions of the earth squeezing the sun up out of itself. “Kinnikinnic, of dogwood bark and sumac leaves.” Oblivious, the grammar throttles forth with a freight train’s sorry glory, unflagging. “The tyranny of the dignified.” Knowledge tether’d to proportion, manageable (rote) chunks of predigest’d slithery. “Daub. Daub. Daub.” What if, out of the slather of the present, a grammatical smudge were “access’d,” a cross-tissue cut, slicing arroyo and air and peccary droppings and the listless exoskeletal remains of the scorpion, a membrane of a moment’s continual undoing, what if one “had” a single word for that batch of particulars, a word that’d remorselessly morph exactly to the ravenous accompaniment of time, feeding meaningfulness into the system at a rate equal to its random (forsworn) changes and accumulations, hence allowing (demanding) the amassing of an unutterable vocabulary, so that tense itself would require the sayable “old words” (there is no language for the future)? “Embêtements sans poésie.” Tooling through the bled of the implausible with no peerless beast or serviceable courtier to guide. The sign of the workability of any language system (an aesthetic) is that its art be reproducible by any ordinary Tom Tinker up late rearranging the whiskey bottles and saleable on the street the next (insurrectionary bright) day, thus serving to placate impulses mercenary, mercantile and ecstatic. “Begging off the trope standard.”

Into Ned Rorem’s New York Diary now, publish’d in 1967, though concerning roughly the years 1955-1961, a period of fairly constant travel, Paris, Italy, the south of France, “around the Mediterranean,” New England, Buffalo. Months in New York go by unreport’d. Some gleanings:

To think—even to talk—about your life is, in a way, to stop living, so a diary becomes a breathing corpse which eats into the present. Possibly, writing music is also a kind of self-denial (as well as self-indulgence), but no one can assert that it’s autobiographical. Music and prose satisfy two distinct drives in me, though each involves anesthetizing life temporarily to bring order from chaos. But the music is sacred chaos while the prose is ordered profanity. Being today involved in the latter . . . I halt to pluck green memories and mount them in this scrapbook like drying fall leaves, leaves whose veins still flow with an inextricable poison that pervades and blurs the very system that formed them.

Or, thinking about the death of lyricist John Latouche (“symbol of immoderate freshness in a country where assembly-line resemblance seems the rule”—I see he wrote lyrics for a song call’d “Ballad for Uncle Sam,” a song play’d both at the 1939 Republican Convention and that of the American Communist Party. I knew of Latouche only out of O’Hara’s “A Step Away from Them”: “First / Bunny died, then John Latouche, / then Jackson Pollock. But is the / earth as full as life was full, of them?”), a taunt against death itself: “Où sont les nègres downtown? . . . Poetically speaking, growing up is mediocrity.”

And (obligatory anti-flarf citation): “Why does mediocrity have that nervous laugh? . . . Does this dumb unfelt giggle impose assurance onto insufficiency? Or is it a groping toward poetry (if you’ll pardon both terms)?” (Too: “Of all nervous diseases, hysteria . . . bores me the most.”)

And (obligatory anti-language writing citation, “some translating required”): “The concrete 12-toners think they are recovering primary sound, but they are only uncovering surface noise.” 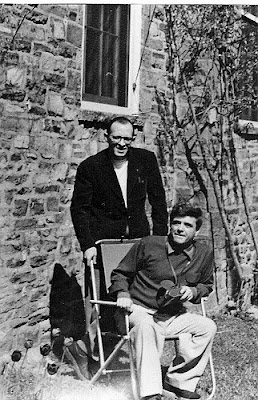