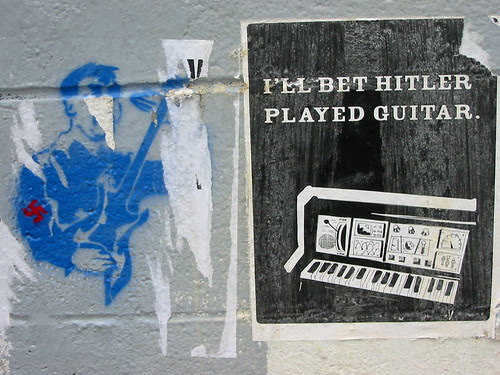 Roberto Calasso (who for range and mastery and curiosity, I’d rank with Guy Davenport), talking about Flaubert’s Bouvard and Pécuchet, eponymous characters of “The Book of our century” in The Forty-Nine Steps:

They speak to us of a world that for the first time had been completely written down: in newspapers and recipes, in bons mots and condolences, bold paradoxes and fearful warnings, cold technical manuals and spiritual guides. And every element in this Scripture adhered to every other, thanks to a wonderful universal glue: Stupidity.

Bouvard and Pécuchet, these two geniuses who are still misunderstood today (they had at least one indispensable quality of genius: They took everything literally) and who are even accused of being imbeciles, were the first to have a horrific vision of the solidarity of the Whole. They saw the Universal Equivalence produced by Stupidity the same way that visionaries once saw oneness in a speck of dust and the flaming stars. And they understood that in the face of that Ineffability, no word need be added. All that was left was a single act of devotion: to copy, because repetition, here as in any ritual, is commemoration of the Unrepeatable.

Alas, today even the devotee’s copious copyist—or copycat—activity (with its manually-induced revery-pleasures) ’s kaput, kayo’d by the cut and paste rigamarole of a redundancy of Google-evangelicals with divining rod search-strings rearing up out of the miasmas of computoidal geekdom, and the only scriptural glue made of the adherent itself, art a “social” skill. (You’d understand that better if you weren’t so stuck on yourself.)

The question continually on my mind all these years is: to what degree does one give up control, and still keep that last vestige where one can call the work one’s own? Everyone must find his own answer here, but there is a story about Mondrian that may clarify what I mean.

Someone suggested that since Mondrian used areas of all one color, why not use a spray instead of painting these areas? Mondrian was very interested, and immediately tried it. Not only did the picture not have the feel of a Mondrian, it didn’t even have the look of a Mondrian. No one who has not experienced something of this will understand it.

The word that comes closest is perhaps touch. For me, at least, this seems to be the answer, even if it is nothing more than the ephemeral feel of the pencil in my hand when I work. I’m sure if I dictate my music, even if I dictated it exactly, it would never be the same.

A couple Nietzschean bones to chew (out of Calasso):

“In the effort to know its own instruments, thought necessarily destroys itself . . .”

On Nietzsche at the point of beginning Ecce Homo (1888), that is, at the point of writing what is later considered (by some) “clinical material, documents of the outbreak of insanity”: “What he seems to have wanted to demonstrate visibly is the passage, already implicit in his previous thinking, from a theory that is radical but still respectful of formal conventions to a practice of an unprecedented nature, which remains ever his most mysterious point.”