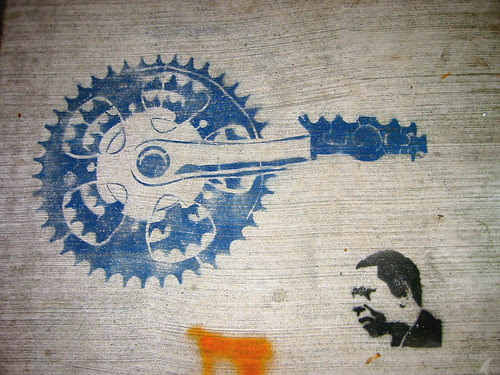 Reading Mark Binelli’s Sacco and Vanzetti Must Die! (Dalkey Archive, 2006)—Sacco and Vanzetti up out of vaudeville into film as slapstick comedians. The book proceeding by herky-jerky bits—“unpublished journals,” movie scenes, lengthy footnotes in the form of “Supplementary Materials,” newsreel—Time on the March—transcripts, excerpts out of The Comedy Film Encyclopedia, and excerpts of the two supposed anarchists’ trial proceedings. A rangy continuum of material “obviously invented” proceeding by degrees to the “obviously historical-factual” with a wide swath of uncertainty keeping the middle spry and exciting. Reminded of Thomas Pynchon by that radical re-writing of history, and, too, by some funny details in the mesh. In recounting a scene of the 1937 picture Ventriloquism and Its Discontents, Binelli writes of the Professore Scrotti, a ventriloquist “retreating into the realm of theory”:

He found performance to be impure, and this perfectionism had reached a level that made his own routine a perpetual disappointment.

In-the-know types wishing to see a performance by the master would surreptitiously enroll in his workshops, during which he rarely used his lips while speaking, his lectures delivered by dummy, dog’s mouth, or the garishly painted nutcracker hussar standing at attention in the corner of his desk. A favorite trick involved pointing a book at the class and flipping the pages with his thumb while making it “speak” a passage from its pages. This was generally Keats. While reciting the poem, Scrotti stuttered in syncopation with the rustling pages. He once delivered a two-hour talk on the short-lived genre of ventriloquist literature (thrillers usually revolving around a ventriloquist who employs his powers for sinister purposes) entirely from a button on the dress of a girl in the back row.

Is it the speed of invention, or the bold reverse-telescoping of focus—literary genre to talking button—something here is Pynchonesque. (Think of the adventures of Byron the Bulb in Gravity’s Rainbow.) Binelli moves next to “speaking genitalia,” including Scrotti’s own which reportedly “once sang an entire verse of the old chestnut ‘Pucker Up, Baby (And Kiss Me Until Them Lips Give Out).’”

Binelli’s Sacco and Vanzetti Must Die! is Pynchonesque, too, in its sense of there being secret (undetected) orders to the universe, precise arrangements of fate, &c. though without the paranoia-songs. One of Vanzetti’s pastimes is underlining random lines in Dante’s Commedia,—the sortes Commediae betraying a writerly drive, propensity to make (anew) the (anarchy of the) world:

By “random” he meant quite literally, as in, “Any card.” He liked the idea of sliding splinters beneath the microscope—the notion that, through sheer diligence of observation, one might glean poetry from the dried starfish at the edge of a painted seascape, from the wizened creases of a second ballerina’s arched toe-shoe, from any number of seemingly forgettable details that accrue into a greater sublime. Of course, he also knew the Commedia back-and-forth enough to make him feel that, on some subconscious level, the selections were not random at all.

The other novelist I think of: Nathaniel West. Most obviously The Dream Life of Balso Snell. Though less purely black humorist.

The “assholier-than-thou”? Trust no one who poses the requisite wee musterable bumptiousness of the revolutionist in the signifying pronoun of royalty. (See, too, the ruckus in the comments chez Joshua Corey.)