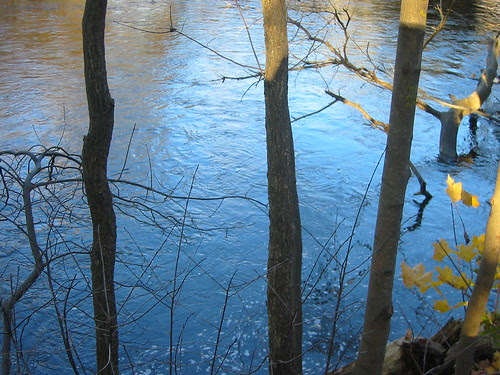 The River at the Mill

Shanghai’d by the books come cartwheeling through my hands. Milton Babbitt in 1947 saying about the life of a composer: “It’s a mad scramble for crumbs.” (File under avant-garde entering the academy.) And Mondrian: “I enjoyed painting flowers, not

bouquets, but a single flower at a time, in order that I might better express its plastic structure.” And for several digital-bounty’d months now I am aiming to photograph a tree, and I cannot find a tree to photograph. A tree, whole, without

rickrack of house or road or cornfield. Its symmetry lax or disproport’d, no sweat. It’s greenery a-dangle or swat off by the breezes. A single tree in ordinary tree-ness. My emphatic half, though, that that’d find a tree in its

plasticity, is keel-haul’d by my own turpitude. School of turpitude. Ode to turpitude. Climbing Mount Chemisier. Ode to the French twerp poets. Now that I am in my dirt and can think. That erstwhile revery of pages and pages of titles. I

find that jamming a little (all channels) opens the pores. The poor ears. Morton Feldman wrote “For Frank O’Hara” in 1973: “My primary concern (as in all my music) is to sustain a ‘flat surface’ with a minimum of contrast.” How oddly wrong

(for me): what I look for (always) is the magnificently roiled surface. Words that jut and nudge and shame the reader into noticing. A boffo jarring against that turpitudinous resin. Oblique sketchiness and defiant rhodomontade. Curios jamming the

rimosity, chinks and fissures, barking. Yoik mulligans. Plain speech of the farm and the barn and the owl and the monk, no sir! (Though, is it plausible to argue that a continual Mighty Joe Young diction’ll drop one into mere-hum register, too? It is, it

is.) And if I think about photography (I try to avoid thinking about photography, I wager most artwork is accomplish’d most ferociously without the impediment of thought, no?): I note that what I do is burn the contrast in, near Kodalith (like a

stencil) style. Or make the colors yelp a little. (Though I see various fifty-seven varieties of gray works, like Henry Wessel Jr. or Jamie Tolagson and think, that’s terribly seductive, isn’t it? I want to rub around in that picture, its sempiternal velvety

folds.) Morton Feldman says he talked about painting with John Cage “every day for five years” in the Cedar Tavern: “The new painting made me desirous of a sound world more direct, more immediate, more physical than anything that had existed

heretofore.” (How write a poem direct, immediate, physical? One senses it occurs, rarely, in whiffs and jisms, momentary word-choice and alignment dictated by the gods. That’s the way it is, rarely. One attempts to locate that “state” through a

but it can learn from this more perceptive temperament that waits and observes the inherent mystery of its materials, as opposed to the composer’s vested interest in his craft. . . .The painter achieves mastery by allowing what he is doing to be

itself. In a way, he must step aside in order to be in control.” The “inherent mystery” of words? The way a mothy word’ll flutter down out of nowhere, a word whose meaning is a mystery, say, “sedulous” or “sodality,” and “fit” the moment, make right

the canvas of words? (That happens. Rarely.) Feldman, talking about Beethoven’s Grosse Fuge suggests that an “aura of danger, something gone amiss, hovers above this music; a suggestion of a final judgment turned against itself. One

suspects that Beethoven in this work was pushed aside by the music’s onslaught.” And asks: “Do I dare to suggest here that whatever transcendental quality this work possesses might be just because of this fact? Just because what we have here, in its

most volcanic and pathetic way, is a control in control of its master?” Consumed by one’s art, burnt on the pyre of one’s own offering, momentary complete self-immolation, how the writing of a poem’ll leave one feeling like a washrag beat

dry against a doorpost. (Rarely.) One thinks of Tom Clark: “The parts of your feelings // Are starting to know a quiet / The pure conversion of your / Life into art seems destined // Never to occur . . .” Lick’d clean by art, one’s own. All

reason enough to avoid the siren call of constructivism and collage, whose rhythms differ considerably, and results transcend only the tiny yelps of material displacement, a noisome noise, hardly heaven-reaching,—reason enough to demand of

oneself a diversion beyond mere sport, one sequester’d by fidelity to that awful unaccountable discharge in one’s head.