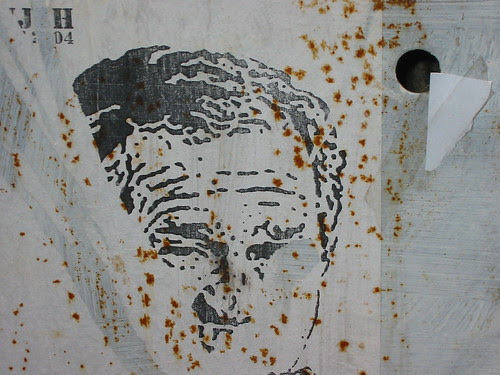 Potted about down by the river one day. Walk’d the bush-hogged “post-buckthorn” fields to the pond another day. Spates of sweet lazy late afternoon napping. If the good burghermeister in me ’s present’d with a dollop of pure freedom, an afternoon’s bucket of it—I tend to squander it, lolling. Time in all its intricacy not so much sailing out in a hung expanse, a golden (sun-wizen’d) discus afloat as gnawing at the innards of itself, irreplicable, wha? A subliminal terror of uncommitted hours? (In the midst of my normal slogging quotidian drudgery I go into near-narcoleptic reveries of how I’d get up—straight out uninterrupted reading and writing—a line of days if only they’d be made free and available . . .)

Emerson: “We want fire; a little less mutton and a little more genius.”

What interplanetary conjunction, confluence of light-streams, it is to read (in Against the Day)—“The frontier ends and disconnection begins”—a Pynchonesque mini-theory of American history—amidst other (undemanding, portable, typo-clad) reading in Peter Barry’s Poetry Wars: British Poetry of the 1970s and the Battle of Earls Court and recall (of what little I recall of some months attending to the mid-’seventies goings-on there in the Poetry Society’s shady bastion) reading a poem titled “American History” (“A scythe of sectile / Retelling. . . . This is where science / Metes out credence. / Heat not languor / Raises valence: / Violence we can measure. / / Better to boil bad water and / Learn to cow ourselves / Into ability.”) My then-spout’d theory being that at the point our rip-snorting belief in our manifest destiny gets hemmed in, squelch’d, and our blinder’d western push hits the “wall” of the Pacific: that’s the point where Americans begin to go crazy, “disconnection begins.” An invisible conjunct, available to no one, barely, even, to me. What I keep trying to figure out—reading the Barry book—is how, if at all, the characters compare with the various tribal members I encounter’d. Who that shortish man who had “us” in a hand-holding circle intoning monosyllables—“me, me, me”—whilst he laid in some high-toned older noise, bounding around (I figured him for mad). Who the Scottish woman who talk’d to herself, seem’d to carry out conversational feints and dodges with several, shriller and shriller. How’d I come by the copy of Panjandrum with the Frank O’Hara supplement (1973), haul’d vers Wales when I fled one morning after a wild night of drinking with strangers, rushing out of an Indian restaurant, lost my hat, and lost myself, trying to foot it “home” through Putney Green, or Putney Heath. Finally flagged a huge black London cab whose cabbie took me for mad—turn’d out my door ’s but a flinch and hobble of steps away. How memory collapses in on itself, into a tiny stack of photographs, underexposed or whitening.

Thomas Pynchon, with all the mad furtive visions of a King Lear somewhere near East Halfmoon, Iowa, with Merle Rideout and daughter Dally: “Planted rows went turning past like giant spokes one by one as they ranged the roads. The skies were interrupted by dark gray storm clouds with a flow like molten stone, swept and liquid, and light that found its way through them was lost in the dark fields but gathered shining along the pale road, so that sometimes all you could see was the road, and the horizon it ran to. Sometimes she was overwhelmed by the green life passing in such high turbulence, too much to see, all clamoring to have its way. Leaves sawtooth, spade-shaped, long and thin, blunt-fingered, downy and veined, oiled and dusty with the day—flowers in bells and clusters, purple and white or yellow as butter, star-shaped ferns in the wet and dark places, millions of green veilings before the bridal secrets in the moss and under the deadfalls, went on by the wheels creaking and struck by rocks in the ruts, sparks visible only in what shadow it might pass over, a busy development of small trailside shapes tumbling in what had to be deliberately arrange precision, herbs the wildcrafters knew the names and market prices of and which the silent women up in the foothills, counterparts whom they most often never got even to meet, knew the magic uses for. They lived for different futures, but they were each other’s unrecognized halves . . .”

In besmudged memory-glades I thought first of Lear’s “what a bare, fork’d animal piece of work is man”’s everybody’s fucking everywhere constantly soliloquy (or whatev), some kind of seeing into the unbuffer’d heart of the natural world, escapades in the dirt with sowbugs and nematodes, though, on “reflection”—meaning I leaf’d through the play—maybe it’s Edgar’s speech, trilling about about the vertigoes of size, size that changes perceptibly, the kind of mad fever’d event of one’s own hands holding craggy mountainous ridges, dips and valleys, a hallucinatory child’s wold (sic):

How fearful
And dizzy ’tis, to cast one’s eyes so low!
The crows and choughs that wing the midway air
Show scarce so gross as beetles. Half way down
Hangs one that gathers sampire, dreadful trade!
Methinks he seems no bigger than his head.
The fishermen that walk upon the beach
Appear like mice, and yond tall anchoring bark,
Diminish’d to her cock; her cock a buoy
Almost too small for sight. The murmuring surge,
That on th’ unnumb’red idle pebble chafes.
Cannot be heard so high. I’ll look no more,
Lest my brain turn, and the deficient sight
Topple down headlong.

Somehow the ichor that runs through each passage is the same. ’S blood.

Finally, Theo Scratcher writes (of, one assumes, Against the Day, though crass Theo ’s an ungodly earbender): “Let’s not think of the novel any longer as a staged Russian dressing, panoramic, multigen’d, and fey, no, more a phat-vatic throwdown of objets trouvés out some Time-gangsta’s deep pockets, thrown down and project’d up into the immediately lowering celestial screen—Time become Space sapped of dimensionality. (I come into “work” today and find a spanking clean copy of Kenneth Fearing’s The Big Clock brooding there on my chair. Spoooo-ky.)”