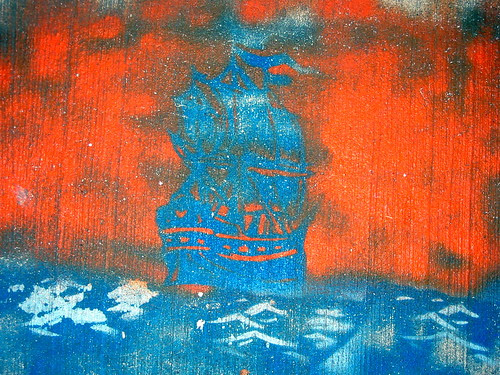 Emily Dickinson, in a letter (1877): “The vitality of your syllables compensates for their infrequency. There is not so much Life as talk of Life, as a general thing. Had we the first intimation of the Definition of Life, the calmest of us would be Lunatics!”

How the quotidian scribble is, it criss-crosses no vital boundary. Horseless and alee on the idiot ship. Thinking what it’d mean to find oneself a-horse’d. (Still, there’s the idiot ship.) Thinking how Wallace Stevens walk’d up and down the Palisades “among the locusts” and never got to Paris. He call’d Elsie Moll, in letters, “Bo,” or, “Bo-Bo.” A taskmaster (“abstain from wet-goods” and “smoke wisely”). Of sleep, he wrote (1902): “sleep only means red-cheeks and red-cheeks are not the fit adornments of Caesar.”

The privately brash and inimitable Guy Davenport—he who sweetly troubles my week, writing to Jonathan Williams—“Dear Thrush of the Nantahalas”—(1967): “As much about food in your letter as in an epistle from Robert Kelly. Food is the one thing (alcohol’s another) that makes me truly blush. Most of the human failings I can regard with an eye of ice (excepting meanness), but I shall go to my grave unconvinced that eating is wholly natural.” (Note for essay titled “Against Eating as Such”: how O’Hara, too, acquiesces to pragmatism in nourishment: “I have in my hands only 35¢, it’s so meaningless to eat!”) (Though he’s always got the tongue-in-cheek to masticate.)

And Theo Scratcher, in a rare handwritten letter (2006): “And regarding the little “sonically-brash” poems—if I do daresay: about as ambitious as making water bounce in a hot skillet.”

Marianne Moore’s letters: little meat, all potatoes, is my sense, defeated in my sputtery attempt.

Rain all night, rain today. Smell of the ancient seas seeping up through the bedrock, a scent to turn the odiferous receptors ablaze. Or swoll’d crimson, budding. Emerson, in a journal entry talks of Boston’s “poor-smell”—a passage that Robert Lowell could well’ve perused before sitting down to write “For the Union Dead”: “There is a certain poor-smell in all the lawyers’ offices, & the wharves, the same meanness & sterility, & leave-behind-all-hope, as one finds in a boot manufacturer’s premises, or a bonnet-factory; vamps, pasteboard, millinette, and an eye to profit. The want of elevation, the absence of ideas, the sovereignty of the abdomen, reduces all to the same poorness. One fancies that in the house of the rich, as the temptation to servility is removed, there may chance to be generosity & elevation; but no; we send them to Congress, & they originate nothing . . .” Time to read Montaigne, I think—see the way I get no traction in the mud of old quarrels today. Or old quotables.

It runs in the blood? Randolph Bourne’s middle name: “Silliman.” (Pas de blague.) Bourne (1886-1918): “Instead of fighting the Philistine in the name of freedom, or fighting the vulgar iconoclast in the name of wholesome human notions, it might be better to write for one’s own band of comprehenders, in order that one might have something genuine with which to appeal to both the mob of the “bourgeois” and the ferocious vandals who had been dividing the field among them. Far better a quarrel among these intensely self-conscious groups than the issues that had filled The Atlantic and The Nation with their dreary obsolescence. Far better for the mind that aspired toward “culture” to be told not to conform or worship, but to search out its group, its own temperamental community of sentiment, and there deepen appreciations through sympathetic contact.” Problem of the overweening public-ness of the age: any “band of comprehenders” is immediately up-suck’d into the maw of the moment. No opportunity (impetus, inclination) to lay low in the hothouse of low-circulation ideas, there where letters accumulate. (Is anybody working out ideas today sub rosa, through some years of letters (think Olson / Creeley), in a postal zone and clime—that is, with a send-and-receive rhythm that allows that slow-ripening focus and cogitation? I doubt it.)