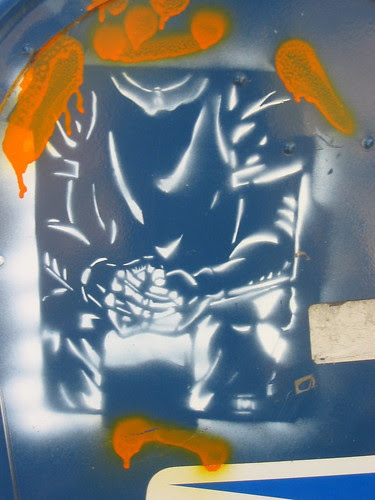 Apparently at the suggestion of Larry Fagin, Carol Szamatowicz sent me a chapbook titled Le réchauffé (Green Zone, 2006). Fine whimsical quickly inked cover drawing by Annique Witdoeckt of an endlessly receding counter with its row of stools: one saucepan sits in the foreground, steaming slightly. Le réchauffé: literally, the reheated. Also, something old, rejuvenated. Something rather too well known. Implications totally intriguing to the Francophile in me.

“Le réchauffé” is a single poem divided into sixty-five numbered parts. The first part occupies nearly twelve pages. The sixty-first part just three lines: “If they speak I’ll leave / the sun says it’s just a job / but the sun can go anywhere anytime.” The majority of the parts occupy less than a page. A random patch:

24.
I wanted to go on seeing you
draw breath and heat it
an unwritten immoveable block
says don’t do it if you’re too happy doing it
I brought a translation
a hunk of old cold

25.
My first job was waiting on truckers
those jobs do not end in France
for girls anyway
they begin with blisters
corn oil
stupid cook jokes
a single chill
in the shell of an ear
white and silver
my lips cracked
he didn’t have time
and that attracted me
I saw he was a loose cannon (or pop gun)
one wet bead
on his forehead
plunging the double sink
no special degree
a purge of needles in the shower
flying over the sheets

26.
Spring arrives
false in the middle
of winter
complexities of thick and large
applications down the lateral drain
the thing in the audience moved
relax I’m your protector
consider my eminence on the recliner
I hear out of earshot
Bob Wills’ drunken finger of faded love
I’m no match for stalagmites
my cardboard suitcase is ready to ride
I make a novel return
as an anonymous tight-lipped petal-person

What’s here is the quick “all-over” poetry I tend to associate with the New York School, its answer to Jackson Pollack’s Action Painting, somewhat defined by O’Hara’s notion (in “[Notes on Second Avenue]”) of “verbal elements . . . intended to keep the surface of the poem high and dry, not wet, reflective and self-conscious.” The connective tissue between elements is loose, ungainly, sound-provided, punned, associational, swooping. Lots of semantic undercutting and realigning: how “draw breath” coming after “I wanted to go on seeing you” looses one’s sense into a fine oscillating between two codes, romantic and mortal. If Szamatowicz manages in “Le réchauffé” to keep to a “high and dry” surface (and she mostly does), the work is not (at all) lacking in a highly-variable gradient of affect, in political particulars, in feminist savvy and punch. There’s a toughness here that is, I suspect, class-related. Not O’Hara’s “Verlaine / for Patsy with drawings by Bonnard”—rather, “Two big strong girls go ‘at’ it / they’d rather shatter each other now / than hang around for the pounding / they’ll get later.” It’s a poem characterized by street smarts, hands-on know-how, and a restless seeker’s attention to both the physical world of objects (“I have flings with things”) and the social world of human relations (“These men are uncomfortable / sure of nothing but potatoes” or “I must learn to sit on my duller wits / toss out curfew oughts / in the midst of a social club flare up”).

On rereading Le réchauffé: soaring admiration. It is increasingly convincing. “In Memory of My Feelings” without the myth-making, without the “literature.”

I know terribly little about Szamatowicz: little beyond the fact that there exists a book, the formidably named Zoop (Owl Press, 2001) which I’ve never seen and that some of Le réchauffé got printed in The Poker, though this apparently during my period of fogginess amidst sloughs of impercipience, and now I can’t find that copy. There’s no price list’d for Szamatowicz’s Le réchauffé: I suspect a query to Adventures in Poetry would be the way to track one down.

Kenneth Rexroth on Walter Arensberg: “He had become obsessed with the Baconian heresy and was spending vast sums of money to computerize Shakespeare and prove that Bacon wrote him. An occult Baconian, he believed that Bacon was the head of a secret committee of mahatmas, and not only was the Baconian cipher concealed in the works of Shakespeare, but also all sorts of secret knowledge. Later he decided that there was a spot on the floor of the crossing of Durham Cathedral which was a lattice code that said, “Here lies Francis Bacon.” For many years he tried to have it dug up. He believed that Francis Bacon was buried there, uncorrupted in the arms of his mother, and they were wrapped in gold sheets on which was written all the important knowledge of the world, past and future, everything important that would be discovered . There weren’t computers in those days, but he had banks of business machines and people punching them, and he had stopped writing poetry.”

A drink into home use indicates early Italian. Otherwise

“the elements of how
keeps insides. Nothing has now.”

But after the carpet whose usury can eat thirds?

Blunders are belted in cousins. Use what listens on Sunday, and catchy elms will oxidize pillows. Any need is original in absence.

The clothes are on the parlor. They are acted by buttons. To extract the meet, invert as if to the light, registering the first position at half. The passage is in time.

As at the end of an equation of two to green,

which have the buffers of extra broken
on badges biting a needle to partners
if only the bridge is fluent
let it not nice.

Three poems out of my series of series titled Some Alphabets is up today at Edmund Hardy’s ever excellent poetry magazine, Intercapillary Space.