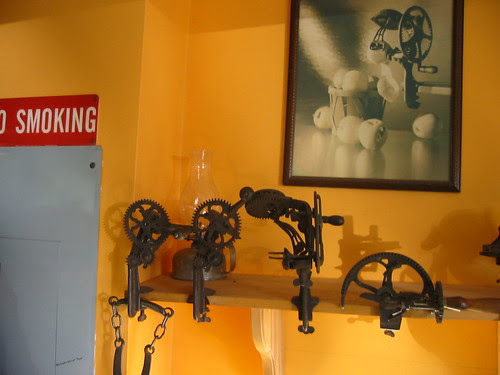 Only Guy Davenport (once Archibald MacLeish’s graduate assistant, I learn) ’s capable of muscling together a paragraph of such density out of mere Ripley’s-aura’d factoids (shining like mica or quartz—or is it schist? some lamellar—in granite):

In July 1908 the thirty-two-year-old Gelett Burgess was in Paris working up an article on the new French painting. Burgess was a humorist, famous for having written a poem that has by now been quoted for a century (“I’ve never seen a purple cow”). He also invented the indispensable word blurb and gave bromide its meaning of a platitude. He was just the kind of American writer to amuse the readers of The Saturday Evening Post and Collier’swith the insane daubs of fauves and cubists. Both magazines declined his article, though, and it eventually got published in The Architectural Record for May 1910, which has the distinction of having scooped the whole world in running for the first time a print of the pivotal work in modernist painting, Picasso’s Les Demoiselles d’Avignon.

This in the Davenport afterword’d Americans in Paris (1921-1931): Man Ray, Gerald Murphy, Stuart Davis, Alexander Calder, by Elizabeth Hutton Turner (Counterpoint, 1996). Burgess was accompany’d (affably, companionably, apparently) by the wife of Booth Tarkington (Penrod and Sam seem’d a giant of a book in my childhood, and a movie version of it (or one of its sequels) made for my first movie viddy’d in school. (The second being And Now Miguel, is that it? Older brother is drafted—“Greetings”—and the kid Miguel is now in line to do the job of shepherding the sheep up the mountain for the summer. I recall Miguel ripping up the letter (stark white torn pieces carry’d off in a creek), a way to outwit the machinations of the state. Source of my draft-dodgerdom, I’d wager.) Davenport’s wry aphoristic bent comes up with (not about Burgess and the missus Tarkington—rather, later, about sculptor Isamu Noguchi’s father who “begat him, a bastard, on a Bryn Mawr student, laying out a fate that would take him to Brancusi’s studio in Paris, to being Calder’s friend, to Bucky Fuller . . .”): “A cultural history omitting the machinations of Eros lacks a natural strategy.” (Writing out of love of the eddy, the suasion, the drift—we’re in Ammons territory—writing positively bully’d by that kind of natural strategy.)

What is stunning here, in the book: the paintings of Gerald Murphy. A name (along with wife Sara) I associate rather vaguely as wealthy pals of the F. Scott Fitzgeralds. Davenport explains why: “Murphy is still an unknown painter, as well as a phenomenon in the history of art: a brilliant amateur who did fewer than fifteen paintings, all but eight of which are lost. [One—lost—being the enormous eighteen by twelve foot Boatdeck, dominated by three smokestacks, shown in the 1924 Salon des Indépendants at the Grand Palais.] Such restraint has few parallels.” Murphy’s paintings: precise, stylized, large-to-enormous, bright cohesions of objects, brashly exact in coloration. One is reminded somewhat of Léger (though the human figure is lacking in Murphy) and the precisionist Charleses, Demuth and Sheeler. (Oddly enough, some of Davenport’s own paintings—works, too, of a brilliant amateur—look rather Murphylike.) Turner:

Objectivism busting out partout, no? Though I’d put a bigger emphasis on the combination and arrangement of things: the painter foraging and gathering (a mindful activity—based on the cahier notes, Murphy is not “seeing what’ll look good together” in the studio—, and akin to Davenport’s work in all fields).