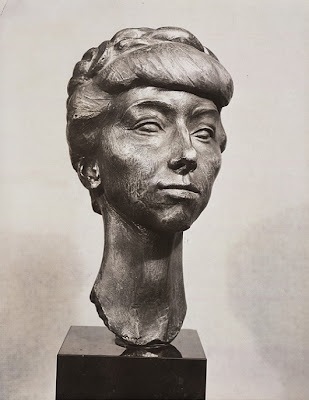 Dogged end to a dogged week, pent up by vaguer commitments. (The short rush and exorbitant boom of a crow-dispersal device.) I love how Marianne Moore—in a piece called “Conjuries That Endure” (in Predilections, a redoing of a 1937 review in Poetry titled “Unanimity and Fortitude”*)—lends a sly extravagance to talk of Wallace Stevens’s expert “bravura”: “Upon the general marine volume of statement is set a parachute-spinnaker of verbiage which looms out like half a cantaloupe and gives the body of the theme the air of a fabled argosy advancing.” And Moore’s audacity (and accuracy) at putting Stevens squarely under the tutelage of “the universal parent, Shakespeare”:

Not infrequently Wallace Stevens’ “noble accents and lucid, inescapable rhythms” point to the universal parent, Shakespeare. A novice of texts, if required to name author or century of the line, “These choirs of welcome choir for me farewell,” might pay Wallace Stevens a high compliment; and the continuing of a word through several lines, as where we see the leaves

is cousin to the pun of Elizabethan drama.

The perfectly selected “choirs” line out of “Le Monocle de Mon Oncle” (the “turning” out of “Domination of Black”). To see how Moore’s indefatigable rewriting extended even to occasional prose. In Poetry the lines read:

A harmonist need not be proud of dominating us illusorily, by causing a flower in bloom to appear where a moment before there was none; and not infrequently Wallace Stevens’ “noble accents and lucid, inescapable rhythms” point to the universal parent, Shakespeare. A novice of verse, required in an examination to attribute to author or century the line, “These choirs of welcome choir for me farewell” might pay Wallace Stevens a high compliment.

Remember how the crickets came
Out of their mother grass, like little kin,

has perfectly Shakespeare’s miniature effect of innocent sadness, and the consciously pertinaciously following of a word through several lines, as where we see the leaves

are cousin to the pun of Elizabethan drama.

The loss of the “crickets” line (“Le Monocle de Mon Oncle”) of little consequence, it being the least convincing of the mustered Stevens Shakespearesqueries. Regarding the loss of the brashly-conjoint adverbials “consciously pertinaciously”: sober clarity is rarely the fun of dash and defiance (Recalling randomly and tout à coup a line out of a letter, Pound to Zukofsky: “AND my doin muzik is vurry elephant climbing tree/.”) As Moore herself declares in the review: “We are able here, to see the salutary effect of insisting that a piece of writing please the writer himself before it pleases anyone else; and how a poet may be a wall of incorruptibleness against any concessive violating of the essential aura of contributory vagueness.” (In Predilections, all talk of concession vamooses: “a wall of incorruptibleness against violating the essential aura of contributory vagueness.”) The idea of an “essential aura of contributory vagueness” akin in my reading to Keats’s “remaining content with half-knowledge”—with the next sentence referring to “such heights of the romantic.” Or, see Moore’s line out of a 12 November 1944 letter to William Carlos Williams:

Wallace Stevens is beyond fathoming, he is so strange; it is as if he had a morbid secret he would rather perish than disclose e and just as he tells it out in his sleep, he changes into an uncontradictable judiciary with a gown and a gavel and you are embarrassed to have heard anything.

He spoke on “The Poet and his Art” . . . his way of launching innuendoes in an innocent manner—with a kind of delayed-action fuse—as if some other topic were now in order, so that everybody was inadvertently capsized . . . The sad part was he is so natural and dislikes loudness so much, that about three fourths of his doctrine and innuendo were lost. He said, “If we are sceptical of rational ideas it is because they do not satisfy reason. If the philosopher comes to nothing because he fails, the poet comes to nothing because he succeeds.” With regard to spoiling things by dissecting out every mystery, he quoted someone’s statement: “He that has only clear ideas is surely a fool.” And said, “Honors can only be for cretins, rogues and rascals.”

I suspect the source of Stevens’s line regarding “clear ideas” is Ximénès Doudan (1800–1872), as quoted in W. C. Brownell’s 1889 French Traits: An Essay in Comparative Criticism, a book reprinted by C. Scribner as late as 1930, and likely the sort of thing the Francophile Stevens would read. Brownell, who’s just referred to Wordsworth’s “Blank misgivings of a creature / Moving about in worlds not realized”:

Let us not take Burke or Wordsworth as witness of the insufficiency of the human intelligence, however. Let us take the clairvoyant Frenchman himself, and let us select two such wholly different witnesses as the late Ximénès Doudan and M. Taine—the sympathetic and the scientific critic, the esprit délicat and the incisive and erudite scholar. They are quite in accord. “We cannot get along without vague ideas, and an able man who has only clear ideas is a fool who will never discover anything,” says M. Doudan. “When the Frenchman conceives an object,” says M. Taine, “he conceives it quickly and distinctly, but he does not perceive it as it really is, complex and entire. He sees portions of it only, and his perception of it is discursive and superficial.”

I think of the 1942 Parts of a World. And of Stevens’s lovely late lines out of “July Mountain”: “We live in a constellation / Of patches and of pitches, / Not in a single world . . . Thinkers without final thoughts / In an always incipient cosmos . . .” (The boom and dispersal done with, the sun long up.)


* The “fortitude” in Moore’s title seemingly derived out of a note dated 29 October 1936 contemporaneously sent to Stevens:

Dear Mr. Stevens,
Owl’s Clover received from you this morning I had been reading, having been sent the pages by Poetry—I would not say for review, no review of such precipitates and beauties being possible—but for comment; and it made me hope for you that in giving to the world one gives to oneself. The world probably is not owl enough to thank you for troubling about it; but an unkilled and tough-lived fortitude is a great help to us, conveyed as it is by your disguises, and may I say as the tenantry say to still persisting members of an aristocracy, “long life to it,” to this hero which you exemplify.
Sincerely yours, Marianne Moore

A dexterous form of deference, with that “us” pivoting between the owlish (wise and befuddled, see “The owlish eye of critic dunce”) “tenantry” and a claim of common footing.