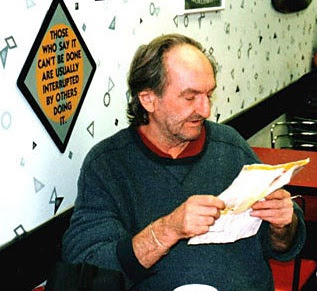 “No sign, albeit” nothing. Yesterday’s impertinence regarding John Wieners’s note to Marianne Moore (“a striving after pitch”) regarding Measure, and Moore’s apparent failure to reply—I needed only to read along a little in “the sea under the house”: The Selected Correspondence of John Wieners and Charles Olson. Wieners to Olson (27 August 1957):

Then came home & there was a letter from Marianne More: & I quote
from it for you.
“I really benefit by:
handwritten
I have no longer any excuse       (Charles Olson)
for envy. My life

has been given its orders; the seasons
seize

the soul and the body and make mock
of any dispersed effort.
also:   Spring: we salute you
season of no bungling* (without capitals at the first of the line.”

(she goes on)
“A (moral) sea-roll in the gait is better for seamen than for poets but I
like:   “Put crumbs on the outside of the window
Let them
handwritten
(Jack Spicer)           come outside.”

In any case, I enclose a dollar for a copy of the next issue.”

(Then Ps)
“I think (I think
spring bungles more than any other season; but the concept is
sound.)

(The stray asterisk in the note, admittedly harried by its transcribing, apparently pertains to naught, is unattached.) Moore is pointing to Olson’s “Variations Done for Gerald Van De Wiele” with its lovely lines (out of the second part, titled “The Charge”):

is separate but by noon
they have melted into each other

and us, are busy. We are busy
if we can get by that whiskered bird,

that nightjar, and get across, the moon
is our conversation, she will say

what soul
isn’t in default?

can you afford not to make
the magical study

which happiness is? do you hear
the cock when he crows? do you know the charge,

that you shall have no envy, that your life
has its orders, that the seasons

seize you too, that no body and soul are one
if they are not wrought

in this retort? that otherwise efforts
are efforts? And that the hour of your flight

will be the hour of your death?

(Is Moore’s seemingly tautly lineated and precise version a paraphrase—or is the piece thusly printed in Measure?) The “season of no bungling” is out of the third part (“Spring”), at the end of the piece: “In the roar of spring, / transmutations. Envy // drags herself off. The fault of the body and the soul / —that they are not one— // the matutinal cock clangs / and singleness: we salute you // season of no bungling.” The Jack Spicer lines Moore selects out of the lengthy “Song for Bird and Myself” (beginning “I am dissatisfied with my poetry. / I am dissatisfied with my sex life. / I am dissatisfied with the angels I believe in. / Neo-classical like Bird, / Distrusting the reality / Of every note.”):

Neo-classical like Bird.
Once two birds got into the Rare Book Room.
Miss Swift said,
“Don’t
Call a custodian
Put crumbs on the outside of the window
Let them
Come outside.”
Neo-classical
The soft line strains
Not to be neo-classical.
But Miss Swift went to lunch. They
Called a custodian.
Four came.
Armed like Myrmidons, they
Killed the birds.
Miss Munsterberg
Who was the first American translator of Rilke
Said
“Suppose one of them
Had been the Holy Ghost.”
Miss Swift,
Who was back from lunch,
Said
“Which.”

One notes the “bird-witted”-ness of each of Moore’s choices. And one recalls, too, Moore’s subsequent review—mostly avoiding the prevalent hysteria that greeted the book, though she did, toward the end, talk rather shudderingly of the anthology’s “content”—“Good content, as Samuel Butler said, is usually matched by good treatment, and poets specializing in ‘organs and feelings’—severed from culture and literature, dogged by redundance and stench—have a stiff task. By comparison with the vocabularies of science, which are creative, in fact enthralling, exhibitionistic content—invaded by the diction of drug-vendors and victims, sex addicts and civic parasites—becomes poetically inoperative . . .”—of The New American Poetry: 1945-1960. Of Spicer, Moore writes: “not indifferent to T. S. Eliot and . . . not hackneyed.” Of Olson’s “projective or field composition”: “Inherited non-projective form can be projective, I would say, and projective form may be weedy and colorless like suckers from an un-sunned tuber.” And quotes Kenneth Burke (Counter-Statement): “a work may be said to have form in so far as one part leads a reader to anticipate another part and be gratified by the result.” Of Wieners: nothing.

(As Wieners says at one point in the letter: “Well, enough quote job.”)
Posted by John Latta at 6:38 AM