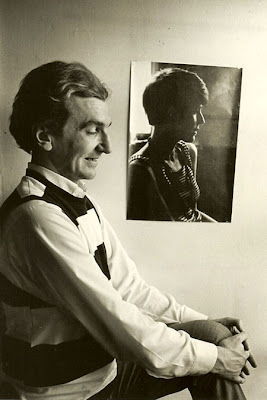 The tender chaos of a momentary lingual void: speechlessness gumming up the works. Or is it the residual glossolalia of the century itself, its tumult of colliding voices, unsorted, inept, mercurial. Cuttings, unculled, relentlessly bunching up, merging into cranial array only to disperse, no agglutinant rare enough to hold, no grease fine enough to prevent seepage. Rendering gone to slop and fandango: “The rendring reid vhilk bouis with euerie blast.” Saith Frank O’Hara, likely thinking of the impish provocateur Rimbaud: “Art is not your life, it is someone else’s.” Thus peremptorily ditching both the self-savvy accumulatory number-cruncher within and the dully feral and “renegade” joiner without, and tout d’un coup. Saith Ammons, in conjunct: “The solemn, the pompous, the terribly earnest are all boring.”

If I pause for a moment, improvident and awry (anagrammatickly rescripted: “wary”), a selfless rupture in the rapturous constancy, its cacophony of sutures merely readjusts, sewing up the hole, any evasiveness dubbed invasive. The ongoing hubbub unstymied. Think of Denise Riley’s “A Misremembered Lyric”:

A misremembered lyric: a soft catch of its song
whirrs in my throat. ‘Something’s gotta hold of my heart
tearing my’ soul and my conscience apart, long after
presence is clean gone and leaves unfurnished no
shadow. Rain lyrics. Yes, then the rain lyrics fall.
I don’t want absence to be this beautiful.
It shouldn’t be; in fact I know it wasn’t, while
‘everything that consoles is false’ is off the point—
you get no consolation anyway until your memory’s
dead: or something never had gotten hold of
your heart in the first place, and that’s the fear thought.
Do shrimps make good mothers? Yes they do.
There is no beauty out of loss; can’t do it—
and once the falling rain starts on the upturned
leaves and I listen to the rhythm of unhappy pleasure
what I hear is bossy death telling me which way to
go, what I see is a pool with an eye in it. Still let
me know. Looking for a brand new start. Oh and never
notice yourself ever. As in life you don’t.

A piece nigh-joyously grubby with its surround, sly in its reconnoiterings, the tearing voices, a musical “express.”

Out of “Communication is essential” / Joanne Kyger: Letters To & From, edited by Ammiel Alcalay and Joanne Kyger,* one of the new and terrific batch of Lost & Found pamphlets, jagged (ellipses seemingly in original) lines of a letter, George Stanley (“I don’t know why the fuck I am here” in New York) to Kyger (15 July 1960):

Part of this is an aesthetic problem . . . my idle mind &c . . . or what do you call it, aesthetic, when it relates to what is happening & abt. to happen . . . I don’t mean critical . . . but I’d begun to take Ron Loewinsohn’s anger at metaphor seriously . . . are ivory towers available & where do we crawl, up? . . . tortuous inner passage. Anyway more of that’s in perspective now & it doesn’t boil down to a straight disjunction . . . as no doubt any of us know in our right minds. What comes is the poem & its rules, the hip reader’s distrust is o.k. . . . it may show wherein the poem has too vainly insisted . . . whether by elaboration, shortcut (metaphor) . . . or false particulars. I mean there is no prior rule (like a constitution)—all easy to say. What I’m writing now is pages of trash . . . aiming only at size / length / inclusion . . . so as to lay myself open to what may come . . . but I don’t want to get on top of my poem & ride it, throwing flags here & there to divert all “casual strangers to the poem”—illustrators wear expensive shirts & carry pencils of all colors in celluloid . . . &C&C.

“Casual strangers to the poem” out of Spicer’s “Dillinger” (it, too, invaded by voices): “The human voices put the angels / Pretty far away. The sleigh-bells / In the distance go / As if we had never seen snow. / Pray for the right of the thing of the universe / The knot which is unknotted by something other than our hands / We, ghosts, lovers, and casual strangers to the poem. / Me, the ghost says.” A piece out of “Homage to Creeley / Explanatory Notes” (The Heads of the Town Up to the Aether, 1960) with its “note” reading:

Not anything real. The snowflakes are equidistant from themselves and fall slowly. Almost impossibly.

There is nothing left of it. Not even the water its crystals puddle into. These persons know reality for what they are.

In the letter Stanley (after a report of lunching with O’Hara*) reprises the “colors” motif, using it to posit a New York that is, nearly, “not anything real,” schematic, yielding to the map of its intent:***

The subway is the real fact of New York . . . it means in a way there is no city, only some kind of a diagram printed in 4 colors & available everywhere . . . you have a sense of certain places to go, work, a bar, museum, friends’ apartments, & red or green lines connecting these . . . so that you really don’t have any sense, say of the river you see from your window as being a river that flows from somewhere else (& in fact they change its name in the middle) . . .


* Two astounding photographs appear in the pamphlet. One the 1967 double portrait of John Wieners and Joanne Kyger by Jerome Mallmann, the other of Wieners reading at a benefit for the Chicago Seven at the Charles Street Meeting House in Boston, in 1970, made by the then teen-aged Alcalay himself.

** Stanley (referring, seemingly, to O’Hara’s “Les Luths”—“Ah nuts! It’s boring reading French newspapers / in New York as if I were a Colonial waiting for my gin / somewhere beyond this roof a jet is making a sketch of the sky / where is Gary Snyder I wonder if he’s reading under a dwarf pine / stretched out so his book and his head ﬁt under the lowest branch / while the sun of the Orient rolls calmly not getting through to him / not caring particularly because the light in Japan respects poets”):

I saw Gary’s name mentioned in some poem or other of Frank O’Hara’s. Want to read more of his poetry. I met Frank abt. a week ago . . . he reminds me of Wieners & says everyone says that to him . . . but he also has Duncan’s gift of talking about 5 or 6 things at once but somehow abt. a single thing . . . beyond the material . . . & in intimate ways. We had lunch and he told me abt. New York, bars, Irishmen, Richard Eberhart (& an award he won in the form of an ugly gold rose), W. C. Williams sitting alone on the steps of a library after all the society & professor people had left for tea, paintings, cheeseburgers, ale, subways, &c.

*** Philadelphia, too, gets its comeuppance: “. . . Was in your home town of Philadelphia, it is like a little old lady with her hands folded & dress splotched with ketchup & mud.”