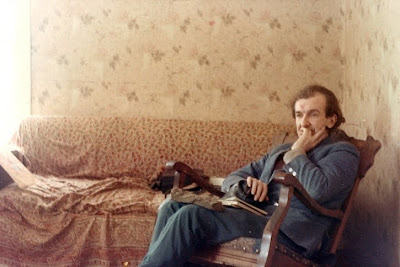 Cold air loosely damping down the fatidic earth in its clot and unexpelled disclosure, like the stabbing abscess of a pleurisy under the bent ribs of the sky. (Shakespeare, out of Hamlet: “For goodnes growing to a plurisie, / Dies in his owne too much.”) Thus the remedy of cloud-riffling incoherency, shouting out a wholly indifferent morning song in order to charge the day with some kind of writerly velocity, words without inventory, un-parceled, inimical, aloof. (Somewhere Poe writes, justly punning: “The dogmatic bow-wow of this man is the most amusing thing imaginable. I do believe that out of every ten matters which he gives to the public as fact, eight, at least, are downright lies, while the other two may be classed either as ‘doubtful’ or ‘rigmarole.’”)

A pertinent letter, plaintive and defiant by turns, John Wieners to Charles Olson, out of the Michael Seth Stewart-edited Lost & Found pamphlet “the sea under the house”: The Selected Correspondence of John Wieners and Charles Olson. Wieners recalling Black Mountain days, and gearing up to edit Measure (initially intended to be titled “BOSTON: a blast from — etc., the contributors listed below that. ‘The opinions expressed in this magazine do not necessarily reflect those of the city.’”--Measure itself dug out of William Blake’s “Proverbs of Hell”: “All wholsom food is caught without a net or a trap. / Bring out number weight & measure in a year of dearth . . .”):

Just wanted to get this off to you. How this whole ‘culture’ wears on one (me). If I did not have the knowledge of me at BM, could entertain the fantasy of shoving it all and going off to ‘the fabulous island’ (Tiamat?)* For even that sheepdip (BM’s) cant do it. We come soiled & needy, from our mothers the white living rooms and it is piled on before our eyes /
are open, turned into consumers, customers at a bad bargain basement. And of course, Measure means a kind of personal whip at it and me. Now this sds. guilt-ridden etc. but not so—its that
when the talisman comes under the hand / then one see the past filth of things of full ears & ‘entertainment’. Too much lying back in the silk cushions. And only when one is shook to see the struggle / just what’s up and how most of the time we aint up at it. Spend the day in a frenzy of waste. [. . .]

And the law you’re under / or were maybe gone now per Blaser’s letter. Only I think often of where you can go and as you do, others take their lead. Let that be stated. I take the lead from footprints. Now anyways. That is why what you do this year will be a lead for many—what a burden you don’t want but such it is—MEASURE, a true wedge for us all to beat our space on- hobnail boots. Well, we do go on. And that’s the wonder that each month seems to be greener, a new bush, than the last.
Yours,
John

Olson’s reply both wary of being defined and amiably shrugging off the mentoring (“Please write instantly what you mean by / ‘And the law you’re under / or were maybe some how per Blaser’s letter’ / please expatiate. Wld like very much (wld help) to / know what you think I was on, & the other statement ‘where you can go’ ?? WOW. Tell me. I’m—lookin’!”) Wieners’s “instant reply” humors the obvious (“SO DAD, take it as you will”), and explains:

. . . Blaser showed me your letter (there was no one else to) and one has to share that kind, no? He even photo’d it to keep the pink paper in the house. Per it, I knew thou to be free. No more chain on the chain on the eagleleg. This is what I meant. And where shall he roost?
And the statement: ‘where you can go’     really a question. For it has been with me, this where?—I entertain daydreams. nightdreams. Gloucester in the hand to give you! Last night, you in a gray silk suit, sitting, very long legs, and someone on my right (smiling, encourage, Duncan?) as I climbed onto your knee Danny Boy. Now that is the most embarrassing six words I have ever had to write . . .

A kind of reckless joy in sheer dispersal and otherness evident, bonds forged in refusal of the post-WWII consumerist glut and imperium. Wieners, in the excitement of deciding to do Measure (“300 copies . . . for $163”) is brash and pure and “wide open, and that don’t mean ‘deviated’!” (letter of 8 February 1957): “I have no reputation to lose, nor none to make. And I am ignorant which is good.” And: “I fit here, this use of energy, and feel behind me all the little creeps who sat down and decided they would publish a little magazine. No matter what, I have their strengths.” Uncommonly refreshing that stance, in an era of rampant opportunism and routinely made measurements of potential cultural capital. Among the “kinds of excitements potential” Wieners is witnessed in a letter dated “August 19 [1957]” planning for Measure III—“a striving after pitch” (what I’d call “reach”):

Start off with a city ‘survey’
From Kyoto, from Fairbanks, from Mexico city, from seattle, San Fran, Boston (me & marshall who I kept out of Two for this reason) Toronto (souster?) London (Turnbull) NY? more than the pansy voice, I want.
Namely a striving after pitch, I even wrote M Moore this AM asking if she’d write a walk back from Grocery Store, for her pitch, I am hooked that bad . . .

Astounding. No sign, albeit, of Marianne Moore’s reply (nothing in the 1997 Selected Letters).

A poem, seemingly uncollected, Wieners sent to Olson in the 8 February 1957 letter, subsequently (with minor changes) printed in The Floating Bear #10, a number filled with Wieners’s early poems. (Di Prima says she gathered the work “from manuscripts that he had left around at different people’s houses where he had stayed at one time or another. The really early stuff, from his Black Mountain days and right after, he had left at Frank O’Hara’s house years and years ago. Frank just laid the manuscript on me. John also stayed at LeRoi’s and left stuff there, and when I came out to the West Coast, I was given poems that he had left at Wallace Berman’s pad when he’d been living with him on Scott Street in San Francisco (period of The Hotel Wentley Poems). There’s a huge stack of unpublished John Wieners floating around somewhere . . .”):

On January 20th the Snows Began to Melt

I saw a woman stagger on the train
With orange flowers in her hand
And I could not make up my mind
To be the woman or: orange flowers

carried underground on this
suddenly before me a boy
came on
and he held in one hand
a bed,
my mother
would say,
of red
gladiolas
a blur of carnations and yellow

A color to soak the black off death
& I knew
dying or dead
women who receive these
see
blinds slashed,

like me in the tunnel under Charles St.
hot as a bee is, seized on their smell.

* Stewart’s footnote reads: “Tiamat was the primordial dragon of chaos of Sumerian mythology, slain by Marduk, the god of order, in the creation myth laid out in the Enûma Eliš.”