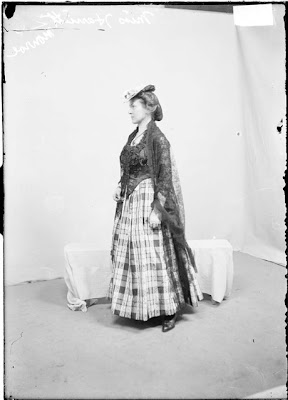 Harriet Monroe, c. 1906
(“Dressed in costume for the Streets of Paris performance at the Coliseum”)

Drenching rain, crows meager and complaining, the blood drive signs dehiscing off the kiosk. The weekend: a black man in Chicago satisfactorily announcing to nobody in particular: “got that Romney bullshit done with.” The usual chores and interrupts. John Ashbery, preparatory (c. 1973) to remarks concerning John Wheelwright and A. R. Ammons:

The pure products of America don’t always go crazy: Dr. Williams himself is a demonstration of this. But the effort of remaining both pure and American can make them seem odd and harassed—a lopsided look characteristic of much major American poetry, whose fructifying mainstream sometimes seems to be peopled mostly by cranks (Emerson, Whitman, Pound, Stevens), while certified major poets (Frost, Eliot) somehow end up on the sidelines.

Warning to all of you—rampant, teeming and tangible—who would seek certificatory ease, that friable temporal certainty, by bowing to the various sacramental smuts (legion and irreproachable in “our” careering unholy era). (Under the plus ça change allotment, recall Wheelwright’s succinct mot regarding the 1916 visit of “Harriet Monroe, editor of Poetry, A Magazine of Verse,” to a meeting of the New England Poetry Club—how she “instructed us in our poetic duties,” after which “few found courage to read verses.”) (Recall, too, Ammons’s sting and piquancy in guise of a shrug: “one with no / community has / only the world”.)

Kent Johnson’s talk, in A Question Mark Above the Sun: Documents on the Mystery Surrounding a Famous Poem “by” Frank O’Hara, of David Wilson’s Museum of Jurassic Technology turned my perennially glaucous (“like the ‘bloom’ on a grape”) eye toward Lawrence Weschler’s excellent little book Mr. Wilson’s Cabinet of Wonder (1995). Momentary clarity of intent: isn’t “wonder” itself, with its the tautly splaying light of contingent and the rescissory, its capacity for welcoming doubt unblemished (James Gleick “nailing down” Richard Feynman’s credo: “he believed in the primacy of doubt, not as a blemish upon our ability to know but as the essence of knowing”) at the rosy heart of Johnson’s conjectural dalliance with O’Hara’s poem “A True Account of Talking to the Sun at Fire Island”? Weschler, with high etymological pertinence:

Those earliest museums, the ur-collections back in the sixteenth and seventeenth centuries, were sometimes called Wunderkammern, wonder-cabinets, and it occurs to me that the Museum of Jurassic Technology truly is their worthy heir in as much as wonder, broadly conceived, is its unifying theme. (“Part of the assigned task,” David once told me, “is to reintegrate people to wonder.”) But it’s a special kind of wonder, and it’s metastable. The visitor to the Museum of Jurassic Technology continually finds himself shimmering between wondering at (the marvels of nature) and wondering whether (any of this could possibly be true). And it’s that very shimmer, the capacity for such delicious confusion, Wilson sometimes seems to suggest, that may constitute the most blessedly wonderful thing about being human.

Or see Weschler’s summary of art critic Ralph Rugoff’s assessment of the Museum:

. . . it deploys all the traditional signs of a museum’s institutional authority—meticulous presentation, exhaustive captions, hushed lighting, and state-of-the-art technical armature—all to subvert the very notion of the authoritative as it applies not only to itself but to any museum. The Jurassic infects its visitor with doubts—little curlicues of misgiving—that proceed to infest all his other dealings with the Culturally Sacrosanct.

A way, of course, to critique and extol the cultural finery and bosh both. (And I do recall—thinking of curlicues and their swarms—how “during one period in the late ’nineties I suspected a whole slew of rather ordinary people of being somehow ‘projections’ of Kent Johnson—Kazim Ali, Patrick McManus, Paul Murphy, Ron Silliman, Jacques Debrot, Jeffrey Jullich, Jordan Davis, Geoffrey Gatza, Millie Niss, Eliza McGrand, Mikhail Epstein, and innumerable fleeting ‘others’ . . .”) To keep the dull purveyors of any detached and suppliant method (as opposed to “mess and message”—or “mess and measure”) at bay, one wields to excess their own canny accoutrements. Weschler quotes Stephen Greenblatt—out of Marvelous Possessions: The Wonder of the New World (1991)—calling wonder “the central figure in the initial European response to the New World”:

Nil admirari, the ancient maxim taught. But, in the presence of the New World, the classical model of mature, balanced detachment seemed at once inappropriate and impossible.

Nil admirari. To be excited by nothing whatsoever. Equanimity’s drab sinecure. It is the current moment’s “maxim taught” too. We hie to no marvel, no prodigy, no portent or divinatory bent. Perhaps it is that subvertiginous (why not?) capacity to dazzle and provoke a wonderment of doubt that makes Johnson’s Question Mark shimmer so. As shimmer it doth.
Posted by John Latta at 7:23 AM