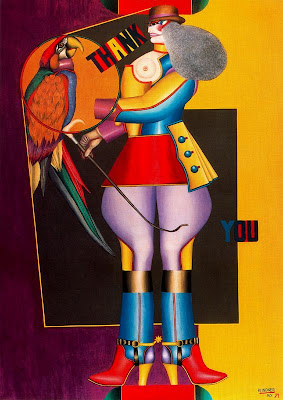 thanks anyway, Frank
you’re not without con brio
n’es ca’fe?

Sentiment is not to the point. A dead letter is there because it has no longer real addresses.

If President Buchanan sent a letter to Cordell Hull (also dead) it would remain there. No thanks to the spirit of things. A dead letter is exactly as if someone received it.

—Jack Spicer, out of “A Fake Novel About the Life of Arthur Rimbaud”
(Heads of the Town Up to the Aether, 1962)

And some believe this is merely a detail. And they may be right. And we may be the whole of which all that truly happens is only peelings and shreds of bark. Not that we are too much more than these. Remember they don’t have to thank you for it either.

There! You shed a ray
of whimsicality on a mask of profundity so
terrific that I have been dumbfounded by
it oftener than I care to say.
The book? Titles are chaff.

Authentically
brief and full of energy, you contribute to your father’s
legibility and are sufficiently
synthetic. Thank you for showing me
your father’s autograph.

Persia, we
Have much to thank you for, besides the word lapis lazuli.

I never used the word rink in my work nor
tosh as in turgid tosh nor slipup, backswing, tocsin,
discinct, skin-flint, razzmatazz: thank the Lord:

if the world wears out, there are still shenanigans left in
the lingo . . .

Did you say thank you? Who are you?

There’s a library not far away
Also brick but under vines with slick blueblack poison berries
A mansard roof thanks to Mr. Carnegie

Mama said: “You don’t HAVE to believe EVERYTHING they
tell you in school—think for yourself a little bit!”

tremendous unwinding on the can
activity of honks & threadage
eye
cancels & ribs blur
murky rod sang & (“thanks but can’t . . .”) the cabbages

you who went to some pains
to leave hands off me
in the formative stages,—
(I thank you most for that
perhaps)

To be pointed in the direction
Of acid nail-biting and told to go
& to go, sad, away from the repeating

“Whammo Ammo, the ammo of choice
for professional revolutionaries”

to praise proud trance, not witless boom
but drift & flicker
home
in on beam of noble sorrow’s
anchored overture as heaven sleeps

—Anselm Hollo, out of “And What’s Your Derivational Profile?”
(Notes on the Possibilities and Attractions of Existence: Selected
Poems 1965-2000, 2001)

some think it’s to do with the line

no thank you
i don’t play with watches

. . . The writer hereof does require that your inferences be removed from his sight. The junkyard in the sun, the milky haze, the standing water, for their work is threefold. And it affects me more than anyone. And I will speak for you without compensation. And together we will pathetically enumerate. And homage to the great red dragon. And thanks to our partners in Attrition Management. And take this bloodstained broadsheet. And do I smell bacon? For the sun makes everything crystal-clear. For covetousness is all.

One place leads directly to another, thank the dancing deities. There are familiar places; remembered places, burnished as driftwood; imagined places; glimpsed, passerine places rootless as petrels; places we can never find again. There are places like stone and places like oil. There are sacred places rising from the sea level, more one-and-only than all the others. There is the birthplace and the homeplace, certifiable by the olfactory, and the final restingplace, and all the in-betweens of dovetailed scenery and sweet locus pocus.

—Merrill Gilfillan, out of “Locus Pocus (Bighorns to the West)”
(Chokecherry Places: Essays from the High Plains, 1998)

And the idea that a room corresponds to a musical note
and thus “resonates” when sung to—the idea that even this bridge
might correspond to a B-flat that, when “sung” by the wind,
causes it to oscillate and utterly collapse—there are photographs—
suggests despite the belief that “we are satisfied only
when we fancy ourselves surrounded by objects and laws
independent of our nature,” music is material, but “the material”
isn’t wholly material. Speaking of which, construction materials
are way up this year thanks to the hurricane damage in the Gulf.

The future seemed to lie in this forest of letters, theories, and forgotten actualities. I had a sense of the parallel between our always fragmentary knowledge and the continual progress toward perfect understanding that never withers away. I felt a harmony beyond the confinement of our being merely dross or tin; something chemical almost mystical hat thanks to architectural artifice, these grey and tan steel shelves in their neo-Gothic tower commemorate in semi-darkness, according to Library of Congress classification.

—Susan Howe, out of “Personal Narrative” (Souls of the Labadie Tract, 2007)

(Will enact same motions for purchase of second watch,
deleting trip to graveyard. Insert instead taxi ride
to gallery. Lack money to pay taxi. Search for bank
which is located immediately thanks to monetary geography of Zurich.)

Not to thank dogwood nor
the wind that sifts
petals are these words,
nor for a record,

but, as notes sung and received
still the air,
these are controlled by
yesterday evening,
a peal after
the bells have rested.

Dearest gadget, to him I
wrote, thank you for skinning
rabbit food and for Mayo

Clinic. Oldest implement,
I continued, but no longer
did he attend. Rusted and cheery

he was now, knew of some
Ology. He’ll to the Mousse Home
go. And seaside, old pot.

If Aristotle stood for options well
brick upon brick . . .
a skin head with a leadpipe
in the conservatory,
brick upon broken
neck, thanks to my skin
it only happens
in my shipwrecked sleep.

What are these wingèd words
that have escaped the barrier
of my teeth?

—Jennifer Moxley, out of “The Wingèd Words” (Imagination Verses, 1996)

Curtains for perky strumpets strutting with mites in the twilight of their origami funkier papoose. Thanks for patting wood at flatland. Thanks for bamboozle flukes at Bama, my seedy medication. Thanks for my name in the yoohoo. Continental camp-out, percolating throughout this whirly-gig on faux saxon flukes. Artless, you dug. Did you re-do?

—Harryette Mullen, out of “Music for Homemade Instruemnts”
(Sleeping with the Dictionary, 2002)

Thanks to brass epiphany I’ve been thinking about Dizzy’s ballooning cheeks. As my wording may have already made evident, they strike me as of a piece with the balloons we’ve been visited by, in some oblique, subterranean way related. Dizzy’s trademark cheeks comply with a principle of exertion and exaggeration, factoring inflation and elasticity in as well. Still, them being a visual trademark may well be their signal feature, trademark visuality itself the signal fact worth attending to. Trademark visuality, it seems to me, wants to domesticate or mask an acoustic risk the music otherwise runs, the risk of acousticality itself.

—Nathaniel Mackey, out of Bass Cathedral (2008)

—sat through a repetition
of the natcheral confluences

the fact divided finally out of that

self w/ self, self on the surface
of other

To get at the thing
Without gestures is to get at it as
Idea. She floats in the contention, the flux

Between the thing as idea and
The idea as thing. She is half who made her.
This is the final Projection, C.

The arrangement contains the desire of
The artist. But one confides in what has no
Concealed creator. One walks easily

The unpainted shore, accepts the world
As anything but sculpture. Good-bye,
Mrs. Pappadopoulos, and thanks.