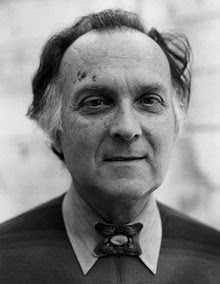 Robert Duncan to Charles Olson (Bañalbufar, Mallorca, 14 August 1955), admitting that it’s “Stevens and back of him the shadowy Mallarmé that seems to haunt my work, Keres from his world scuttering in to attend the séance of each poem.” And: “The poem anyway being not only made but heard, so that one is listening, the line comes to one, as much as one is inventing.” Scutter: To go hastily with much fuss and bustle, as from excitement or timidity. Keres: Tenebrae, the death-inflected daughters of Erebus (or Erebos, Greek Ἔρεβος, “deep darkness, shadow”) and Nyx. Duncan: out of the end of “An Owl Is an Only Bird of Poetry” (1955):

The joy
is a great scuttering of feathers words
a whirl
up words into an airy sentence where
reader
by reader accepts his mixd whether
of love
face by face in his poem’s crackt mirror.

This is an owl as he flies out of himself
into the heart that reflects all owl.

Who gives his hoot of joy as he flies.

In a letter to Ellen and Warren Tallman (21 March 1961), Duncan talks (of the “Structure of Rime” series) as being composed “in the shamanistic genre, of psychic double-talk (hence, as in Egyptian texts—the importance of puns)—an art of dreaming.” And: “my medium has to be not the astral light but the languages—to let the language speak thru me) (send myself out into the language).” (See: “accepts his mixd.”) And, listing some source material: “Charles Henri Ford’s Little Anthology of the Poem in Prose, items p. 338 Mallarmé’s Demon of Analogy . . . The Mallarmé . . . most crucial.” Out of the Ford anthology (found in the 1953 New Directions in Prose & Poetry #14), the Mallarmé (with its deft positing of languge as a kind of “god-step at the margins of thought”—“Des paroles inconnues chanterent-elles sur vos levres, lambeaux maudits d’une phrase absurde?”), translated by Wallace Fowlie:

The Demon of Analogy

Have your lips sung unknown words, plaguing bits of a ridiculous sentence?
I left my apartment with the precise sensation of a wing gliding over the strings of an instrument, slowly moving and light, which was replaced by a voice speaking in descending tones the words “The Penultimate is dead,” in such a manner that
The Penultimate
ended the line and
Is dead
was detached most uselessly from the prophetic suspension in the void of meaning. I walked a few steps in the street and recognized in the sound nul the taut string of the musical instrument, which was forgotten and which glorious memory had beyond doubt just visited with its wing or with a palm, and touching the artfulness of mystery, I smiled and implored a different speculation from intellectual prayer. The phrase returned, powerful, released from a former fall of feather or branch, henceforth through the heard voice, until at last it was spoken alone, alive, in its own personality. (No longer satisfied with a perception), I continued reading it as the end of a line, and once, as a test, adapting it to my speech; soon pronouncing it with a silence after “Penultimate” in which I found a painful pleasure: “The Penultimate” then the string of the instrument, so taut in the oblivion over the sound nul, broke doubtless and I added in form of a prayer: “Is dead.” I didn’t cease continuing to attempt a return to favorite thoughts, alleging, for my peace of mind, that certainly penultimate is the dictionary term meaning next-to-the-last syllable of a word, and its apparition, the ill-relinquished remainder of a linguistic labor by which my noble poetic faculty daily sobs at being interrupted: the very sound and air of mendacity assumed by the haste of facile affirmation were a cause of torment. Harassed, I determined to allow words of a melancholy state to wander by themselves over my mouth, and I continued murmuring with tender intonation of sympathy: “The Penultimate is dead, is dead, is really dead, the despairing Penultimate,” believing therewith to satisfy my worry, and not without the secret hope of submerging it in the steady increase of my chant when, O terror!—with an easily deducible and nervous magic—I felt that I had, with my hand, reflected in a shop window, making the gesture of a caress descending over something, the voice itself (the first which had undoubtedly been one voice).
But where the undeniable intervention of the supernatural is established, and the beginning of the anguish which tortures my mind, once a lord, is when I saw, raising my eyes, in the street of antiquarians where I walked instinctively, that I was in front of the shop of a lute maker, seller of old instruments hanging on the wall, and, on the floor, yellow palms and wings of ancient birds buried in the dark. I fled, a strange figure condemned probably to wear the mourning garb of the inexplicable Penultimate.

Isn’t there something to be aligned between something like Duncan’s resolve (“The Truth and Life of Myth”)—“Often I must force myself to remain responsible to the error that sticks in pride’s craw; not to erase it, but to bring it forward, to work with it, even if this flaw mar a hoped for success . . .” and Mallarmé’s determining “to allow words of a melancholy state to wander by themselves over my mouth”? Inchoate notes.

A rhyme is a member in whose force of identity we remark—remember or anticipate—the presence of another member. In composition by field, a color does not glow in itself or grow dim, but has its glow by rhyme—a resonance that arises in the total field of the painting as it comes into that totality. The “completion” of the painting is the realization of its elements as “puns” or “rhymes.” The painter works not to conclude the elements of the painting but to set them into motion, not to bind the colors but to free them, to release the force of their interrelationships.

Inchoate notes bis.
Posted by John Latta at 8:01 AM