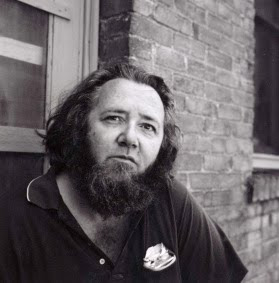 Or the morning arrives—regularly of late—dragging its empty gunny sack, no unwashed potatoes to dump out here, no offering for the implacable quotidian gods. Dud mephitics of the daily rout. Aimlessness in the deserted quarry, tracing the scarifying loops of the dirt bikes. (A dumb way to talk about improvisatory distress.) John Wieners, in a letter to Joanne Kyger: “I’m really a very simple person, and only trying to build up a myth about myself.” And, that Kyger might accompany him to Spoleto: “I will carry you between pages of my favorite book.”

Intuit and lurch with certitude, its unerring music made of the compactly concussant. A cosmology of one. Or ferret out the latent asininity of formulaic mischief, and apply its rouge. “Just talk.” Ted Berrigan:

TB:   It just, like, disappears. It comes to a point in the middle of the page and then kind of fades out. But, I think a lot about “it,” “that” and space. “It” being myself, kind of. And “that” being everything else. And “it” and “that” are everything. That is, they constellate reality, given a particular meaning which one has to take into consideration or else nothing exists.

Out of the genial wash of talk, its suds and temporary occlusions, grit in the ebullient. How an integrity inheres irreproachably to itself whilst the gab (“just talk”) goes excepting and kablooey in the august surround. (A dumb way to talk about improvisatory mayhem.) Recalling, oddly enough, talk of A. R. Ammons (in a 1984 interview called “The Unassimilable Fact Lead Us On . . .”):

. . . things that people say are not always consistent. . . . You wake up one morning and you’re sort of in the northwest part of your mind, where you have one nexus or one cluster of associations, in which a certain thing seems right. But a week later you may have moved over to the southwest or somewhere and you have a slightly different perspective. This is not to say that somewhere there isn’t a consistent center of thinking—there is—but statements have to be looked at as a certain kind of information. That is to say, it’s a discursive or explanatory mode and, consequently, it can never stop. You just go on explaining forever. But the poem is able to become silent, to stop, and it contains within itself the truth that has not been turned into statement, but into a kind of standing, a kind of completion, a theme-like disposition. It’s a disposition, a poem is, rather than an exposition. It has a kind of structural integrity that once that’s complete then the poem just stands there. It may be made out of words but it’s no longer saying anything. It’s just complete. Whereas things we then say about that poem, or things we then say about the poet, we can go on saying forever. And they will be more or less true, but they won’t represent as nearly the whole truth as this non-statement thing that’s taking place in the poem or in the person . . .

“That motion should orient itself around stillness”—the nonverbal core. “You can’t do anything with ‘it.’” And Berrigan, later in the conversation with Coolidge: “You can say any fucking thing you want . . . language is just a toy.”
Posted by John Latta at 6:54 AM