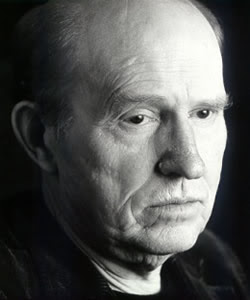 Piecemeal and ineffectual be the worldly captures, and dubious the churnings “out.” Retrieval’s zone is littered with breakage, and clarity, that low-hanging fruit, is but a roseate stand-in for doxy without gumption, a parent to appearance’s simpler sway. So the out-lying rough spurs up a slackening, and the hawsers droop in their tethering, grips go listless, fists unclench and drag useless in the abluent. Thus we “hold to / a majesty sense only manages to blemish,” rhetorically big, a little stand-offish in the flail and outreach of our roaring.

A. R. Ammons, in a letter (6 July 1966), out of Epoch (52:3), “This Is Just a Place: The Life and Work of A. R. Ammons”: “A writer is a spiritual whore: he begins writing because he simply loves sex—that’s the innocence. Then the public enters, appreciates his love-making, wants to watch: or detests it, and wants him to hide. In any case, he can no longer proceed by innocent instinct. If he is to last as a spiritual whore, he must take up the role, consciously, deliberately; he must feel himself up, as one who is watched and, maybe, blessed—different. He must get out the paint and the bright phony flowers and carry away into sublimity by pure nerve the emergent whore. He must be contemptuous and vain, fretful and flamboyant: most of all, he must maintain that the notice he has gained is the most valuable thing this world affords.”

Out of an interview with Shelby Stephenson (1985), Pembroke Magazine (#18): “I feel that the crunch and tension in the dynamics of poetry come from the confrontation of opposites: energy and restraint, focus and comprehensiveness, one and many, abstract and concrete, balance and imbalance. These giants yielding nothing one to the other generate vast storms.” And: “I feel deeply religious but in a naturalistic way. I feel that from the plentitude of events and places, from the occurrences and recurrences of actions, we make assimilations and go on up through higher and higher assimilations holding onto facts and to feelings of accuracy and compliance for correction. These ‘ways’ things work are the high ways for me, philosophy’s jet-streams that finally add up to the great containment of silence and stillness.”

Containment uncontained. Refusal’s hold refused (holding’s refusal unleashed). Motility’s succinct versatility teasing out the edges of the phenomenal smear, extending the rut. Out of a letter to John Logan, begun as journal entry (14 January 1958), in Epoch: “The other night I wrote—just like that—my greatest poem, reducible into nothing but itself . . . ‘The mountains said they were.’ I am an actamist. That is an imagist of acts, not images. I build the behavior true, Oh Lord, and let the reader transform the actions into his own ideas. I can’t stand the naked statement of an unclothed, unbodied idea. It hasn’t reached the level where the poet works: transformingly transforming. I must have made a note somewhere: poetry is but about change.” Out of a letter to an unidentified recipient (21 September 1954): “It is not enough to write One Good Poem in this life, but to live constantly in the rich mental landscape capable of writing the One Good Poem—here lies the poor poet’s reward.”

Out of Sphere: The Form of a Motion (1974), a book stippled with arbitrary, stanzaic boxes demarcating no thing, complacent markers in the stream, energy slaloming against its own formal nod:

78
but it’s breathing in there, a dumb eager little botch: I aim
absolutes at it so blasting, recoil and strike unnerve my
stability: (from so small a thing, what distant orbits I’ve

taken into residence) but it’s not now form against that form:
it’s motion: the renunciation of boxes . . .

And, with some lines intervening:

into cutting blooms, I sometimes lose definition tendencies
by looking out: look out: the tiny invites attention:
outward concentrations: (the poem reaches a stillness

80
which is its form): crush a bug and the universe goes hollow
with hereafter . . .

Against any fining down of the grease, that palpable insistency to “lose definition tendencies”: Ammon’s own “batty way to give information about the poem.” (I am thinking of O’Hara’s line at the end of “[Notes on Second Avenue]”—how he insists “the verbal elements . . . are intended consciously to keep the surface of the poem high and dry, not wet, reflective and self-conscious”—surely a similar tendency to Ammons’s ranging refusals, opposing metaphors notwithstanding . . .) (Somewhere Ammons admits “I’m afraid I still am entranced by the ‘accuracy’ with which water laps the lakeshore more than by the words from the lips of men”—a kind of retort to O’Hara’s “Meditations in an Emergency” amiable sass “I have never clogged myself with the praises of pastoral life . . . I can’t even enjoy a blade of grass unless I know there’s a subway handy, or a record store or some other sign that people do not totally regret life.” Note, though, the Ammonsesque quality of O’Hara’s next sentence, regarding the need “to affirm the least sincere”: “the clouds get enough attention as it is . . .”)

Ammons, on reading (Pembroke): “I’m a writer, not a reader. I have, I suppose, brushed up against a good many texts, usually to get a clue how the writer is doing things. I’ve never been interested enough in another writer to read him thoroughly for his subject matter. I don’t care what his is. I read the world, the world I see, and I say what I see. I know of Paterson, Cantos, Maximus . . . but I could not maintain that I know very much about them, neither that I am very much interested in learning anything further about them. I have a row to hoe and have a hoe.” And: “I don’t even read Ashbery, much as I admire him, much. I admire him for throwing readymade, empty answers into confusion and calling on everyman’s theoretical resources to turn the indefinable definable again.” 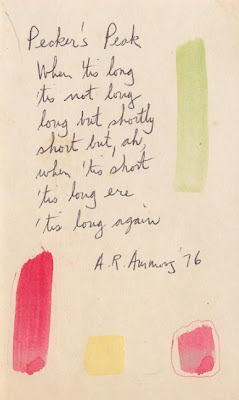