Zonal provender. “As yet in me unmade.” The tenth and final booklet of The Grand Piano, that precipitous exercise in something grand (the authors subtitle it—coyly, or habitually, or out of the pump’d-up retro-garrulousness of the minor mob, one “doth” not know—“An Experiment in Collective Autobiography, San Francisco, 1975-1980”) is here, and, compleatist that I be, it behooves me to read it, “and save the serpent in their midst.” Barrett Watten’s made bee-loud noises hereabouts and thereabouts about “every intent to respond”—no doubt he’s methodically putting wattle to clay and pondering it still in “deep heart’s core.” The final number carries a somber dedicatory line “to the memory of Leslie Scalapino (1944-2010)” and a semi-faux-expiatory epigraph out of Jackson Mac Low’s The Pronouns:

We question each other
while we do something down on the floor,
attacking each other at times,
but never stopping our questioning,
& always reasoning regularly.

We number some things or some people,
& we page some of the people
& either we harbor poison between cotton or
we go from breathing to a common form

Curious choice for a cohort known for eschewing the natural: the pure organicism of that final line’d meet the mete ordinary regimen of la poesía norteamericana, like that of, say, language-writing stalwart Stanley Kunitz’s “the poem conceived as a way of breathing in words.” (Re: that “we do something down on the floor”—a little un-ensorcel’d openness about the “doings-something” ’d explain a lot. How’d Kent Johnson put it? “I am interested how all literary theory, however disinterested it may seem, is driven by the sex-drive, tell me honestly it’s not.” That “we” do not “get” in The Grand Piano. It never goes beyond Watten’s mysterious initials and Mandel’s flub’d encounter with the French travelots. “I am sure of nothing but this, intensified by breathing.”)

Alors: Ted Pearson, the leading man. Reading Pearson’s opening gambit, a piece call’d “Etude 10: Threads”—the musical motif (with sections label’d “B,” “B♭,” “D,” “E♭,” &c.) here clumsy’d up with Penelopean warp-weftings (“The tapestry encrypts an ontological riddle” is offer’d, straightfacedly)—one’s struck by both the sheer joylessness of the recitatif, and by the extent of French theory’s congealment in the hands of ideologues, its status (for some) as Doxa, rote, formulaic, conventional. Pearson:

The work site is where work is done. The work, cited, is what is done. The conditions that produce it persist as traces that underwrite the text. This, by convention, we address in the present—itself but a moment in the life of a text—where work continues to be done. For the reader, the text delimits a site where the work of making meaning takes place. For the writer, it also reveals a remainder that reminds her of work that is yet to be done. For both, it is a claim on the future that now includes it, even as it renews itself in the present it addresses. Every text, if only implicitly, begins with the words, “It is written . . .” But is this the work of the writer, or of the language in which it is written?
Language is the medium in which “I” is suspended as an instance of saying “I.” Whenever I speak, it speaks otherwise, folding whatever I think to say into an excess that complicates my use of it . . .

Und so weiter. One thinks of the nineteenth c. New England blab schools, or the McGuffey readers. That Calvinist “work” doctrine. That sense of one’s place in a hierarchy. (Numerous the refs in Pearson to “knowing one’s place,” or it “heroic” refusal: “The politics of writing begin with the refusal to know one’s place—except as a ground of contestation and critical intervention” and “It entails refusing the social command to know and to keep one’s place” and, oddly enough, referring less to the larger social world than to the “nexus of private relations” (one guesses the grandees themself?): “Our work and our works are equally beset by epistemological questions—questions regarding our capacity to resist, as well as our complicity in, the episteme we inhabit—and which led a community of practice to emerge from a nexus of private relations—a community whose members continue to address the problem of knowing their places.”) See Mac Low: “attacking each other at times”? Where, in the documents, be the riffs on the rifts?

For Pearson, The Grand Piano is the “site” of vacillatory mayhem: retrieved heroics in the city versus dumbfoundedness and anxiety at the eventual “chronotope” (defined by Pearson: “the formal array of temporal and spatial elements on which a narrative is based . . . this project may be read as a chronotope—not as a monument to a community, but as the dynamic of a community in its endless weaving of past experience, present practice, and a future—even now unfolding—” and off into Penelopean metaphoricks.) History, according to Pearson, is cinemascopic:

I think of the Grand Piano years as having occupied “the lapse between lightning and thunder” . . . The lightning afforded glimpses of possibility against an anomic backdrop. And the thunder, louder than any noise we might have made, announced that the forces of reaction were gathering to rain on everyone’s parade.

(When history refuses to boom under the lights, it’s a quasi-lyrical mess. Pearson offers up a couple of paragraphs of daily anomie, freight’d with what reads like the heavy water of a personal code: “The cult of the difficult, exposed to desire. Tale of the Tyger. Hair of the dog. . . . Blue shirt, white pants. Night bleeds into. The morning after. My body double at their wedding. . . . In the decade when. Minimal wages trumped cultural capital. But my weekly reader loved to fuck.” Leaden with “import.”) Palpable anxiety: Pearson’s repeat’d (“doth protest too much”) acceptances of the onslaught of change: “In my experience, wherever one arrives is never the place one had imagined coming to.” And: “Rhythmic changes transport time—emblems of my desire—making me subject, over time, to forces that seek to author pleasures I once could barely imagine. Have I, then, abjured a “linkage most lyrical” to become a historical footnote? But no.” “But no”: high rhetorickal ploy of the utterly unconvinced. 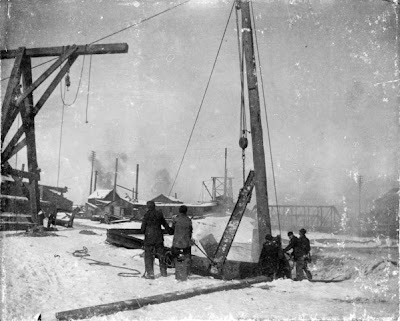