Lazy morning, a honey-color’d cold sun camouflaging the minus fourteen degrees F. breezes, my usual impetuosity slow’d by leafing through Thoreau, all that lovely stickler’s (stickle, v.: “To act as official regulator of a tournament, wrestling match, or the like.” Earliest use, 1530: “I styckyll betwene wrastellers . . . to se that none do other wronge.”) botanizing, Asa Gray to hand (I love the stickling here: “The Dracaena Borealis (Big) Clintonia b. (Gray) amid the Solomon's seals in Hub. Grove Swamp—a very neat & handsome liliaceous flower with 3 large regular spotless green convallaria leaves making a triangle from the root—& sometimes a 4th from the scape linear—with 4 drooping greenish yellow, bell shaped (?) flowers.     not in Sun     It is a handsome & perfect flower, though not high-colored. I prefer it to some more famous. But Gray should not have named it from the Governor of New York— What is he to the lovers of flowers in Mass. If named after a man, it must be a man of flowers.”) And, out of the Journal for 16 January 1853:

Trench says that “‘Rivals,’ in the primary sense of the word, are those who dwell on the banks of the same stream” or “on opposite banks” but as he says, in many words, since the use of water-rights is a fruitful source of contention between such neighbors, the word has acquired this secondary sense.
My friends are my rivals on the Concord—in the primitive sense of the word— There is no strife between us respecting the use the stream. The Concord offeres many privileges but none to quarrel about. It a peaceful not a brawling stream— It has not made Rivals out of neighbors that lived on its banks—but friends. My friends are my Rivals       we dwell on opposite banks of the stream—but that stream is the Concord—which flows without a ripple or a murmur—without a rapid or a brawl & offers no petty priveleges to quarrel about . . .

Trench refers to the Dublin-born philologist and polymath and priest Richard Chenevix Trench (1807-1886), author of On the Study of Words (1851)—a book that went through some thirty editions in the States by the Civil War—and On Some Deficiencies in Our English Dictionaries (1857), a piece outlining a proposal that result’d finally in the OED. Thoreau’s joyous bastard etymology continues (27 January 1853):

Trench says a wild man—is a willed man. Well then a man of will who does what he wills—or wishes—a man of hope and of the future tense—for not only the obstinate is willed but far more the constant and persevering— The obstinate man properly speaking, is one who will not. The perseverance of the saints is positive willedness—not a mere passive willingness—The fates are wild for they will—& the Almighty is wild above all.
What are our fields but felds or felled woods—they bear a more recent name than the woods suggesting that previously the earth was covered with woods. Always in the new country a field is a clearing.

(Thoreau’s “wild” riff akin—particularly in its insisting “at” constancy and perseverance, its processual push—to Kerouac’s “wild form” sketch’d in a 3 June 1952 letter to John Clellon Holmes, its unstoppingness, its omnivorousness, its holy obstinacy: “What I’m beginning to discover now is something beyond the novel and beyond the arbitrary confines of the story . . . into realms of revealed Picture . . . wild form, man, wild form. Wild form’s the only form holds what I have to say—my mind is exploding to say something about every image and every memory. . . . I have an irrational lust to set down everything I know.”) Of one of Trench’s riffs—“‘Transport,’ that which carries us, as ‘rapture, or ‘ravishment,’ that which snatches us, out of and above ourselves; and ‘ecstasy’ is very nearly the same, only drawn from the Greek”—Thoreau writes (15 January 1853): “True words are those—as Trench says—transport—rapture ravishment, ecstasy—these are the words I want. This is the effect of music— I am rapt away by it—out of myself— These are truly poetic words. I am inspired—elevated—expanded—I am on the mount.” The wild Almighty himself. And the amateur par excellence. I am thinking of Barthes’s lovely formulation in Roland Barthes:

The Amateur (someone who engages in painting, music, sport, science, without the spirit of mastery or competition), the Amateur renews his pleasure (amator: one who loves and loves again); he is anything but a hero (of creation, of performance); he establishes himself graciously (for nothing) in the signifier: in the immediate definitive substance of music, of painting; his praxis, usually involves no rubato (that theft of the object for the sake of the attribute); he is—he will be perhaps—the counter-bourgeois artist.

There is a coarse boisterous money-making fellow—in the N part of the town who is going to build a bank wall under the hill along the edge of his meadow—the powers have put this into his head to keep him out of mischief—and he wishes me to spend three weeks digging there with him— The result will be that he will perchance get a little more money to hoard or leave for his heirs to spend foolishly when he is dead— Now if I do this the community will commend me as an industrious & hard-working man—but as I choose to devote myself to labors which yield more real profit though but little money they regard me as a loafer— But as I do not need this police of meaningless labor to regulate me and do not see any thing absolutely praiseworthy in his undertaking however amusing it may be to him, I prefer to finish my education at a different school. 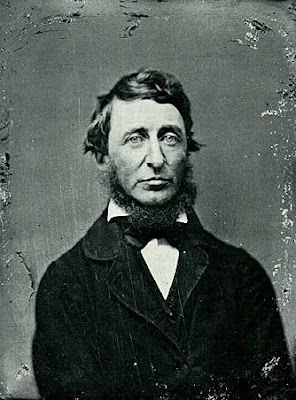