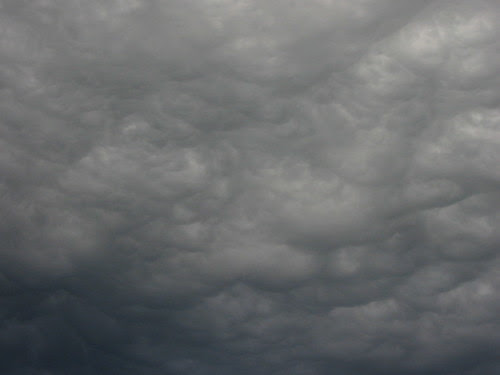 Balmy, somehow “shapely” breezes (the smooth’d and globular dimensions of their approach), the moon (just beginning to deflate) descending into the torn-off westerly edge of the planet, there where the black trees fork off into unremedy’d nothingness. Bedraggled finitude, honey-parch’d, to connect is to bump up against a dispersal, blue. Spicer: “We make up a different language for poetry / And for the heart—ungrammatical.” Blaser (“The Practice of Outside,” out of the 2006 The Fire: Collected Essays) calls that language “unsituated” / “primary.” Thinking about Spicer and “correspondences” (Baudelaire’s word). Blaser writes of Spicer’s love of Lewis Carroll’s The Hunting of the Snark (“For the Snark was a Boojum, you see”), that (or any) romp of “language always at the edge of a meaning” (that being—“naturally” enough—language’s “unsituated” or “primary” state.) Drawing it out: Spicer’s liking of “St. Augustine’s definition of a sacrament as a ‘verbum visible’” (see, in one of the letters to Lorca, the desire “to make things visible rather than to make picture of them”—“Live moons, live lemons, live boys in bathing suits. The poem is a collage of the real”), the way “Jack ‘no longer speaks of identity but of correspondence’” (Blaser’s faulty quoting / interpreting of lines out of After Lorca: “Things do not connect, they correspond. That is what makes it possible for a poet to translate real objects, to bring them across language as easily as he can bring them across time”), the lovely line out of Poe’s Marginalia that Spicer riffs off in “Improvisations on a Sentence by Poe”:

Isn’t the “grand concord” akin to what Guy Davenport (in Every Force Evolves a Form) calls “a form that articulates forces, making them intelligible”—articulate = utter distinctly, array in a series—that is, “a work of art”? What if Spicer’d bother’d with Fourier? “La série distribue les harmonies. Les attractions sont proportionelles aux destinées.” Snip out a single item in Davenport’s “Au Tombeau de Charles Fourier”—out of Da Vinci’s Bicycle and witness series within series, real lemons:

Grabble, umble, bourrée and gigue: true musicking. (Consider, too, Coleridge’s remark in a 7 March 1815 letter to Joseph Cottle: “The common end of all narrative, nay, of all Poems is to convert a series into a whole.” Signs of a demeanor, a common measure, that of grabblers amongst yellow stalky umbels, honey-seekers, never diffident.) (Recall Spicer’s “love of Virgil’s 4th Georgic (Orpheus and bee-keeping) which he willfully confused [according to Blaser] with Ovid’s Art of Love, book I, on the basis of a single phrase, “et e medio flumine mella petat,” and let him seek honey in the middle of a river, turned by Jack in an early poem, which plays on the name of a young man, into “Mela, Mela peto / In medio flumine,” I seek honey in the middle of a river . . .”) Another of Davenport’s Mandelbrotian miniatures (series mimicking series) lifts its mead-color’d eyes:

And (explicatory with series imbed’d):

The series distributes the harmonies. Linnaeus died when he was six, Buffon when he was sixteen, Cuvier was his contemporary. Swedenborg died the week before he was born. All searched out the harmonies, the affinities, the kinship of the orders of nature.

All of nature is series and pivot, like Pythagoras’ numbers, like the transmutations of light. Give me a sparrow, he said, a leaf, a fish, a wasp, an ox, and I will show you the harmony of its place in its chord, the phrase, the movement, the concerto, the all.

Davenport talking about Fourier in an interview in The Paris Review:

The whole world, he said, is a correspondence. And everything comes in a chord. The chord contains eight items. The center of the chord is the pivot. At one end of the chord is the avant-garde, and at the other end is the arrière-garde. In a fruit chord, let’s say, you have at one end the ripest golden pear, and at the other end is the quince, which never ripens. It remains as hard as a rock. And all of these corresponded with personalities (I’ve know plenty of quinces).

And, after remarking that “Fourier had a wonderful sense that the world was designed by some great poet, that it was full of rhymes, or affinities . . . I’ve always liked that,” the interviewer asks a “philosophical question”: “Does one create these rhymes, these affinities, or uncover them?” Davenport’s honey of a mordant (honest) reply: “I probably make them up.” And there’s Spicer at the end of “Graphemics”: “Love is not mocked whatever use you put to it. Words are also / not mocked.” Isn’t some jut-modicum of my sense of a Davenport / Spicer correspondence the unblunt’d solitariness of each? Spicer: “Wit is the only barrier between ourselves and them.” Spicer’s “collage of the real”—its way of ducking off into inconsequence. Its way of bumping up against a dispersal. “Fifteen False Propositions Against God”:

Beauty is so rare a th—
Sing a new song
Real
Music
A busted flush. A pain in the eyebrows. A
Visiting card.

A tiny series. What a card. (My way of ducking off—in medio flumine—into inconsequence . . .) 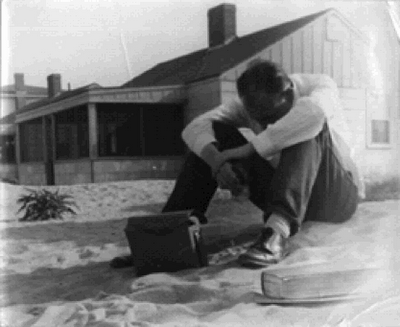