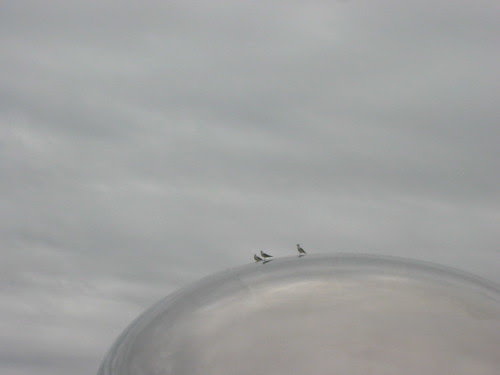 Rummaging through the initial issue of Art and Literature (1964), the magazine that John Ashbery edit’d (along with Anne Dunn, Rodrigo Moynihan, and, briefly, Sonia Orwell), work nearly overlapping with Locus Solus, whose final issue is seemingly undated, petering out (planned obsolescence) circa 1963-4 (Locus Solus edit’d by, too, Kenneth Koch, Harry Mathews and James Schuyler, each of the four doing a number, Koch doing the second, all collaborations, Ashbery a double issue—III-IV—call’d “New Poetry,” Schuyler editing numéro I—with Ebbe Borregaard pieces and Robin Blaser’s “Cups” amongst its contents, leaving number V—lacking apparatus—presumably to Mathews), I stumble again up against a story by one Richard Fields call’d “The Wind Sneezes Many a Lost Baboon,” a thing that’s long pique’d my curiosity. The opening (seemingly couch’d in the veriest heart of an implacable in medias res):

The rest was easy and he sneezed. Dozing on the front stairs he listened to the wind whistling around the corner of the house. Not that he had ever been able to believe that it was whistling to him. But water was boiling somewhere . . . somewhere where tea kettles and locomotives lived a life of their own. Like the time the kettle turned on the gas under itself—aluminium it melted gracefully, just the wood handle caught on fire and stank.
He preferred not to wake up this way, but it always happened so. I don’t know why I never seem to be able to do anything worth-while, he thought. I could have caught nightwalkers last night and gone fishing this morning.
He caught the light coming through the trees in a funny way and asked the sun: “And what are you looking at?” The sun said: “Whatever made you think I was looking at you, or, for that matter, whatever made you think anybody is bothering to look through the trees in a funny way?”
He knew the sun really hadn’t said anything . . .

Et cetera, aimlessly prevaricating, a lackadaisical surreal punctured by moments of lyricism, moments of violence. What I found curious: the contributor’s note:

Why that “American” emphasis (with words like “aluminium” and “nightwalkers”—Briticisms, no?)—and why the gut punch that says Richard Elliott and Walter Grutchfield, in the absence of add’d info, they, too, “sound like” a couple of pseudonyms? What is that “talking to the sun” routine? So I look up Richard Fields’s “Nine Elaborations for 26 Characters” in Locus Solus. Of little use. Aimlessness under the sign of the alphabet, violence, the too easy surreal:

Could it be by accident that I encountered B. again tonight? On the path of a circular park, in a bright orange gown, she poised on tiptoes. Savagely, by vigilant hysteria, she split herself in two, one half running round the right of the park, the other around the left . . .

No clue (another Briticism—“flats”—though the story’s rather elastic setting is mostly New York City environs: “a notorious café located in a suburb of New Jersey,” the Brooklyn Navy Yard, &c.), no contributor’s note. Back to other back issues of Art and Literature, scanning contents pages for Fields or Elliott or Grutchfield, or other unlikely sounding names (thinking: here’s a coterie rife with collaborating, pseudonyming, &c. not unlike “our” own . . .) I see something call’d “Serious Fish and Old Straw Hat” in Art and Literature 4 by one W. W. Winkworth—turns out it’s legit: William Wilberforce Winkworth, collector of Japanese art, writing about collecting (“Fish cannot be a serious subject for a picture or for any work of art.”) In numéro 8 (Spring 1966), though, an oddity. Two poems (“Phone to the Poets in Moscow” and “Isolation at 9 p.m.”) by one Koichi K. O’Hara. What ho! Momento, citoyens! Here:

Phone to the Poets in Moscow

My friends, Soviet Poets in Moscow, yet covering
Your flute of Muse, thought of soul, by the heavy deep snow,
Tell me,
When your flute of Muse will be coming to laugh
With gladly song escaping
From your gloomy dark song-winter-exile.
Reading
A book, yesterday afternoon,
Of world Poet-lame-cyclops young Mayakovsky,
Translated by young interesting Jewish girl,
In my office, at University Columbia, in New York,
Remembering
My troubled thoughtful time in Moscow University,
From 1958 to 1961,
When I could touch to the soul of Russian Muse-simple-people,
Decided I, called on you from my office, from University, N.Y., U.S.A.

Operator,
It’s a personal call, to Moscow from New York, U.N. 54000, x, 3291.
My name is K. K. O’Hara, Irish name but Japanese Poet.
What’s the matter? Moscow now asleep? Wake up! Individuals!
Chort-znaaet! O my goodness!
Wake up my generation’s Poets in Moscow!
Wake up my friends Poets, Tvardovsky-Chorkin-Bashimachikin,
Evtyshenko, caught by a fishing net, and his friends young Poets,
Also caught in network,
And wake up Poet Union in Moscow!

Hey! Hello!
Is this Moscow’s Poet Club?
Are you living good anyhow?
Listen!
I’m a Poet in a cafeteria at New York, K. K. O’Hara, Remember me?
Yes, this is that O’Hara.
Don’t you want to come to Paris-painting-town in this summer?
I will take with me American Poet Kenneth Koch from here.
Let us open and invite to our Poet World Conference in Paris
French Poets-skillful also.
Let us talk, what we Poets must do, now!

Now,
When Moscow’s girl students already try to go to the moon,
Want to escape from Moscow’s bad room condition, with her boy friends,
When New York’s girl students already try to go to the cosmos,
Want to escape from New York’s dark small room-unsunlightful,
With her boy friends,
Why young Poets in the world, you and I and we, must sign gloomy song
Yet?
About depressed black dark wintersky? And
About poor network of fisher-politicians-unskillful in the world?
Killing is killing as skinny is skinny.
But yet some politicians continue to think unskillfully,
That political machine is the technique,
How man kills man,
How to find and make enemy
Between men and women, mankind and womankind,
Between allkind and everykind,
Forgetting,
From the time of Cain, filled enough by the man’s blood,
Already our small earth, shaking her body, becomes red.

Could I meet to that day,
When every politician put on its base of policy a law,
That nobody ever kills anybody on our earth?
Let us remember Aristotle’s words:
Every state is an association of persons,
Formed with a view to some good purpose . . . ,
Even though he recognized a war against animal-man.

Listen!
Now, what we Poets must do?
Poet must stop a turning somersault-himself?!?
Poet-philosophy must be practical!?
Poets-we now must stand higher than Aristotle!?
I think, as a poet of the cafeteria,
As a King from muttering retreat
Of people,
Must ask and request of politicians,
With all our voice of powerful powerless Muse,
Could they?
Could they do it?
Repairing, changing, rebuilding already old machine-political?

May be?
How do you think?
Humankind always changed machine, old to new.
Why could you not now?
Why could you not change to new machine, from old one-political?
From old ideology, psychology, sociology, zoology,
From old animalology (i.e. Politicoanimalman-economicalology),
From old stomachology,
To new one?

Let us invite
To our World Conference of Young Generation’s Poets in Paris,
Ghosts and goats, dying and living, good and bad of politicians,
Including in it, all leaders of big and small, past’s and present’s
Nations.
And ask them
With a smile as a Poet, as a King from muttering people-cafeteria,
Could they promise on our earth, no more, nobody kills anybody?

Laugh! Smile!
Kiss me! Kiss us-Poets!
Muses-my-young-girls of our cafeteria in N.Y. and in Moscow!
Kiss me! Kiss us-Poets!
Muses-our-girls-friends of Moscow’s and N.Y.’s simple people!
Say, that’s O-Kay!
Look!
This is the bill!
They promised, pledged!
Now politicians in the world become just technicians,
Only making, repairing, rebuilding, reconstructing earth to green!
Now we, Poets-firemen, punished-vagabonds, at last put out
All the politician’s head’s fires!
Forever and ever!

Something obviously fishy here. The contributor’s note for O’Hara reads: “KOICHI K. O’HARA is a Japanese poet and critic in the field of literature and Russian problems. He graduated from the University of Tokyo and later studied Russian literature at Moscow University. From 1964 to 1965 he was visiting scholar at the Russian Institute at Columbia University.” (“Isolation at 9 p.m.” continues with the somewhat tedious mock-pidgin jawing—“If you want to know, what is America, / Come to our cafeteria, on the Broadway, / At 96th St., at 9 p.m. / Our company waits for you / . . . I am an American, Becoming American is / Not from nature, but ideal . . .”) What be these things? Possibilities: a thinly-veil’d collaboratory mess by O’Hara and Koch. Doubtful: the tone is neither various nor disrupt’d, there’s no O’Hara finesse. A one-author piece by a scene hanger-on / admirer of Koch and O’Hara. Dubiety locks its jaws against the “black dark wintersky”: no sign of “other” voicings (sauf Eliot’s “muttering retreat”). My sense is that the piece’s full of Koch’s own parodic earmarks: the japonerie of the earlier “Ko, or A Season on Earth,” the butcher’d foreign English (see something like the “young Swedish nurse” Ingelil’s speeches in “The Merry Stones”—“Lay down and be slumbering” or “I am a laziness that comes from a nuttier country; I see to not understand your flailing indecrepitude”), the endless exclamatory outbursts, &c. The reference to the “world Poet-lame-cyclops young Mayakovsky” is possibly of note to compadres audibly wondering at the provenance of O’Hara’s “A True Account of Talking to the Sun on Fire Island.” Possibly not. For my part I intend to read all of The Collected Fiction of Kenneth Koch (Coffee House, 2005), looking—vainly, I suspect, seeing now a story call’d “At The Silver Rail” in New Directions 20 (1968) by Walter Grutchfield—for stylistic signs of the Richards—Fields and / or Elliott—or of Grutchfield himself. (The art of the possible: to turn one back to the work.) It’s a world full of lovely and mysterious signs. 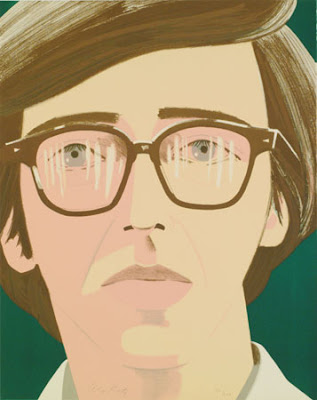