The rogue-sapient (unman’d) rudderlessness of reading here and there—“It makes our thinking Pink” says Emily Dickinson in thrall to a “prime temps” thaw. Fatigue does that too: diffuses its tender proses incarnadine and bloody out into the vasty seas of mere longing, gone. Or unplainly compromises a mountebank’s tensile vivacity, showing only the whiteness of the shill’s toothy smile when the mark goes down. Bolaño says the gauchos “do strictly that: strum, without playing any song in particular, in accordance with the country way.” (We are all secretly gauchos ourselves.) (There is, too, the gaucho sense of time itself: “They could adapt to a forty-day month without any major headaches. Or to a four-hundred-and-forty day year.”) (Says Emerson of Thoreau: “Henry avoids commonplace, & talks birch bark to all comers, & reduces them all to the same insignificance.”) Think of a democracy of prose, all tangent and whimsy and tumble unrebuff’d, a “prose without depth.” (Ted Berrigan, in Dear Sandy, Hello, says of Jean Dubuffet: “He is Paul Klee as King Kong, kind of.” And notes how one “scraped” canvas, “looks like a rock surface”: “It is called ‘Lesson to be learned from the earth.’”) (Though, eorþe, uncertayn and myriad be thy lessons: “Sum hurlit to þe hard yerth.”) (One measure of Berrigan’s New York (c. 1962): “I wrote to O’Hara last night, and sent him five poems and asked him if he’d like to go have a beer somewhere.” Peripatetic, unanchor’d, ambulatory days, sleeping on sofas, a ripe beneficent leisure:

Dick [Gallup] is still asleep, Joe [Brainard] is working on his collages. Bill McCollum is lying on the floor reading [Józef Maria] Bochenski’s Contemporary European Philosophy. The sun is shining brilliantly outside, and it is warm again in New York. I’m drinking a Pepsi. In a few minutes I’m going to wake up Dick, for sport, I guess, and we’ll go over to Anne’s to see what the detectives have been up to. The walk down through the Village is one of the best things about New York.

And pooling what little dough there is (“Joe got money in the mail today, so tonight we all go to the movies, to see the Marx Brothers in The Big Store. We are all secretly the Marx Brothers ourselves.”) Something intangibly awry, a mete difference between there and here. “Here” being the way the commonplace itself is partout and encyclopedic, a constant onslaught: there is nothing that is not commonplace, even the minor arcanum obvious as a finger’s itch. Stravinsky says: “Every age is an historical unity. It may never appear as anything but either / or to its partisan contemporaries, of course, but semblance is gradual, and in time either and or come to be components of the same thing.” Meaning something like: Ron Silliman’s work’ll always resemble that of Sharon Olds more than either’s’ll come to seem like Pound’s. Or there’s Bolaño again, telling the story (“Jim,” in The Insufferable Gaucho) of “the saddest North American I’ve ever come across” (echo of the depth-charg’d opening sentence to Ford Madox Ford’s The Good Soldier: “This is the saddest story I have ever heard”—though, there, too, just the way the unman’d earth’ll knock one up against it—“hurlit to þe hard”—one must needs approach such “deep” front-loading circumspectly, suspectingly . . .) Bolaño’s Jim:

The Mexican street kids used to ask him, what’s poetry made of, Jim? Listening to them, Jim would stare at the clouds and then he’d start throwing up.

And of course there’s more—“Vocabulary, eloquence, the search for truth. Epiphany. Like when you have a vision of the Virgin. He was mugged several times in Central America, which is surprising, because he’d been a Marine and fought in Vietnam. No more fighting, Jim used to say. I’m a poet now, searching for the extraordinary, trying to express in ordinary, everyday words. So you think there are ordinary, everyday words? I think there are, Jim used to say.” And Ted Berrigan’d agree. He’d say:

Every day when the sun comes up
The angels emerge from the rivers
Drily happy & all wet. Easy going
But hard to keep my place. Easy
On the avenue underneath my face.
Difficult alone trying to get true.
Difficult inside alone with you.
The rivers’ blackness flowing just sits
Orange & reds blaze up inside the sky
I sit here & I’ve been thinking this
Red, blue, yellow, green, & white.

Open tuning, strumming “without playing any song in particular.” One way of playing a simultaneity of songs.

Nota bene: At The Chagall Position—here—Edmond Caldwell’s put down a marvelous heap of language regarding the strong-arm tactics of The Kenneth Koch Literary Estate, in cahoots with cosignatory poets Bill Berkson, Ron Padgett, Jordan Davis, and Tony Towle, against Richard Owens’s Punch Press printing of Kent Johnson’s A Question Mark above the Sun: Documents on the Mystery Surrounding a Famous Poem “by” Frank O’Hara. Why there’s essentially no evidence of outrage forthcoming out the mouths of any of “our” “major” post-avant “playas” at such thuggery and attempt to censor: aucune idée. Toff pedigree of the careerist self-satisfy’d swell, one suspects. These days swoll’n—like a magpie—beyond all honor. 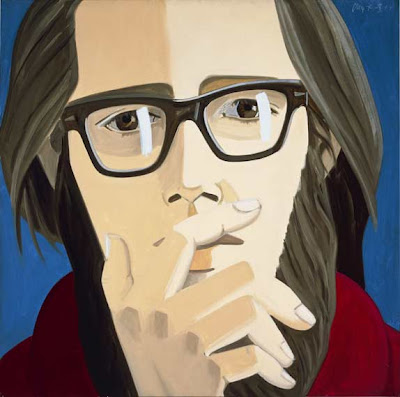