Some Clouds (Near Thirteenth Lake)

Rocketing and swaying back through the independent American night—fireworks making berserk radii against the uncloud’d scrim of Lake Erie—it occur’d to me that I ought pepper a notebook with my execrable scrawl, add a fervent blustery number to a genre: the train ride. Return’d an unfuddled discerning eye to my book:

Yes, it’s incredible how much people say, how much they discuss and recount and write down, this is a wearisome world of ceaseless transmission, and thus we are born with the work already far advanced but condemned to the knowledge that nothing is entirely finished, and thus we carry—like a faint booming in our heads—the exhausting accumulated voices of the countless centuries, believing naïvely that some of those thoughts and stories are new, never before heard or read, but how could that be, when ever since they acquired the gift of speech people have never stopped endlessly telling stories and, sooner or later, everything is told, the interesting and the trivial, the private and the public, the intimate and the superfluous, what should remain hidden and what will one day inevitably be broadcast, sorrows and joys and resentments, certainties and conjectures, the imagined and the factual, persuasions and suspicions, grievances and flattery and plans for revenge, great feats and humiliations, what fills us with pride and what shames us utterly, what appeared to be a secret and what begged to remain so, the normal and the unconfessable and the horrific and the obvious, the substantial—falling in love—and the insignificant—falling in love.

That being one of Javier Marías’s “swells” (oceanographic: “successions of waves continuing beyond or after its cause”) out of the final Margaret Jull Costa-translated volume of Your Face Tomorrow (New Directions, 2009). Departing the swoll’d city, going lubberly off, say, into the hemlock-prick’d night of the Adirondacks (a name derived out of the Mohawk word ratirontaks meaning “they eat trees” or “bark-eaters”—a derogatory term for the nearby Algonquians, who’d do so in periods of scarcity—such is what one gleans off diner placemats, sopping up egg yolk with a poor crust of toast), one comes with nigh-immediacy to doubt the valence of one’s stake in the adamant vainglory of things—that cuspidor, a-churn with otiose blow!—and revels in a sort of enforcèd nonchalance, unburden’d by the sempiternal modesty of a bird. A cedar waxwing’s invisibly zeeeing perch up in the dying arbor vitae. According to Marías, what’s terminally inaccrochable —to crave the sully’d “muchness” of being “a man of one’s time”:

There’s no room for maneuver when everyone agrees and sees things the same way and gives importance to the same things, and the same things are deemed serious or insignificant. There’s no light, no breathing space, no ventilation in unanimity, nor in shared commonplaces. You have to escape from that in order to live better, more comfortably. More honestly too, without feeling trapped in the time in which you were born and in which you’ll die, there’s nothing more oppressive, nothing so clouds the issue as that particular stamp. Nowadays, enormous importance is given to individual deaths, people make such a drama out of each person who dies . . . although the subsequent grief or curse doesn’t last very long: no one wears mourning any more and there’s a reason for that: we’re quick to weep but quicker still to forget.

(Marías’s usual unstinting—and funny—assessment of human beasts: “there are people who only screw someone so that they can then rabbit on at them to their heart’s content, as if that intertwining had give them a license to do so.”) (One notes, too, elsewhere, the implacable counter-weight regarding the endless telling: “We can never free ourselves from telling something, not even when we believe we have left our page blank.” That, veering off into its sobering denial: that “the day will come when everything is levelled out and life will be definitively untellable, and no one will care about anything.”)

So I read, and script’d no notational mess. Avoid’d the wholesale incorping of fatuitous alignments of signage with fate, dodg’d the expedient clamor of the snorers, skip’d the assailant mephitics unrecordable, quell’d the insurgent hubbub the writerly task unleashes. I read, too, early in my trajectory, John Hawkes’s The Blood Oranges, largely with indifference. The hammering at tin of Hawkes’s “thesis” (the book seems less singular optative than merely illustrative)—

Need I insist that the only enemy of the mature marriage is monogamy? That anything less than sexual multiplicity (bodies upon bodies, voice on voice) is naive? That our sexual selves are merely idylers in a vast wood?
What is marriage if not a vast and neutral forest in which our own sexual selves and those of our first partners wander until momentarily stopped in the clear actuality of encounter?

—isn’t it merely another dolloping out into its particulars of Freud’s remark in a letter (used as epitaph to Durrell’s Alexandria Quartet): “I am accustoming myself to the idea of regarding every sexual act as a process in which four persons are involved. We shall have a lot to discuss about that.” All that, and idyll’d a little in the woods, in the un-hawk’d woods. 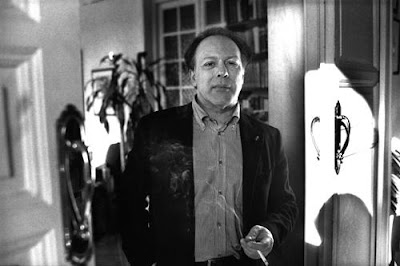