Out of Tom Clark’s elegiac Feeling for the Ground (BlazeVox, 2010):

That nigh perfect four-square spondaic pile-up of “rainsoaked redwood / Microworld dollhouse” (adjectival city breakdown) delivers a terrific sense of diminishing spaces, Russian doll-style. Popped shut by the dud “weren’t” (abrupt cut-off to expectancy), the “gospel hummingbirds” turn out to exist only as memory expunged (“thought process husks”—a thing less than memory). If I say “expunged” it is because the cyberworld invades the piece (“redwood” next to “Microworld” calls forth the unstoppable incursions of that “space” into the quotidian), just as the remnants of old-style “gospel” religion do. I begin to think of Clark as the poet of the various luminal empires—borderlands between wakefulness and sleep, the present and what’s gone, bardo’d reveries of ascent (or—in the case of the American empire) descent. Here’s “Night Shift”:

Slightly caustic intimations of a world wherein even the core fleetingness of the gone world (and its messengers) goes barely announced. Compare Clark’s ineffectual defeat’d dead—“no one’s / not even their own”—with Pound’s Homeric heroicisms:

Souls out of Erebus, cadaverous dead, of brides
Of youths and of the old who had borne much;
Souls stained with recent tears, girls tender,
Men many, mauled with bronze lance heads,
Battle spoil, bearing yet dreory arms,
These many crowded about me; with shouting,
Pallor upon me, cried to my men for more beasts;
Slaughtered the herds, sheep slain of bronze;
Poured ointment, cried to the gods,
To Pluto the strong, and praised Proserpine;
Unsheathed the narrow sword,
I sat to keep off the impetuous impotent dead . . .

Some measure of a sense of decline. Everywhere in Clark’s Feeling for the Ground hints of human agency and license gone: a “post-natural” robotic world in charge:

Nobody’s home, but the For Sale sign
speaks of a collapsed urban economy
and parked just down the block
in an undelivered future
is an abandoned car
with idiotic beeps emanating from it
messages to the past
from the absence where we are
the wind setting off mechanized alarms
an animated bedlam
in the night

Stuck (“undelivered future”) here in the purgatory world of early twenty-first century, in a kind of asylum (“bedlam”) of our own making, compleat stasis reach’d in the ceaselessly klaxoning night. Look, too, to the brilliant “We Can Take This Moment and Freeze It”:

When X reached out, earnest, intense, bewildered,
To extend a helping if trembling hand
To Y, lost in the reified nightstreet void,
Prefiguring the data thicket plunge

Of everything into Total Recall
Where nothing that’s living is remembered
Because in the instant life turns into
Information it dies, stays forever dead—

Eyes red and burning with radiation shimmer,
One’s failing sense of self in wigged out trade winds
Shifting minute by minute to a sense of everyone
As blind automata, compelled by need and drive—

The street preachers argue among themselves
About the Rapture, the when and how, not the why.

I don’t think anybody’s writing with such severe condemnatory demeanor as Clark in “freeze it” mode, like some Isaiah of the “reified nightstreet void.” To write “the instant life turns into / Information it dies, stays forever dead” in the vacant heart of the “Information Age” is to snarl out a warning. I think (“One’s failing sense of self . . . / . . . a sense of everyone / As blind automata, compelled by need and drive”) of D. H. Lawrence’s note of the American sense of “masterlessness”:

They came largely to get away—that most simple of motives. To get away. Away from what? In the long run, away from themselves. Away from everything. That’s why most people have come to America, and still do come. To get away from everything they are and have been.
“Henceforth be masterless.”
Which is all very well, but it isn’t freedom. Rather the reverse. A hopeless sort of constraint. It is never freedom till you find something you really positively want to be. And people in America have always been shouting about the things they are not.

Clark refuses to acquit himself, or absolve even the morning mania for writing (another kind of “info”)—making, he hints, is not being. “Opus” begins: “Sacrificing to the limiting demands of the opus / is no way to start your day. The opus / itself is like a kind of canvas, with what / has not really been lived through, only idly imagined, / splattered more or less randomly / upon it . . .” (That mock highbrow’d use of “opus” suggests, too, that making a career is not being either—“far from it!”—as Frank O’Hara’d say.)

Not all of the pieces in Feeling for the Ground are so unabash’dly lyrical, or deftly notational. A fine prose piece call’d “Market” (“only the one line is open on a Saturday night and the line has stopped moving”) churns the resultant mayhem through one enormously long sentence (I think of some of Robert Walser’s miniatures) to end: “the night is long, here comes the night, here it comes.” And moments of grace do emerge. Here’s one:

September 12 1783
Anna Williams was buried
who’d sat up blind to
drink tea with him
in the small hours
mournful conversation
“I do not know
that I have anything
to forgive you
I have set my house in
order”
113 sq. inches

hot sleepless
disturbed at night
got up & slept in a chair

Liminal worlds, a sweet merging of Dr. Johnson and Clark himself (who is it that “got up & slept in a chair”?) Somehow that remembering of “the Latin word / for gooseberries” is a perfect victory, dispelling by a little of the oblique (and explicit) violence of the “era.” 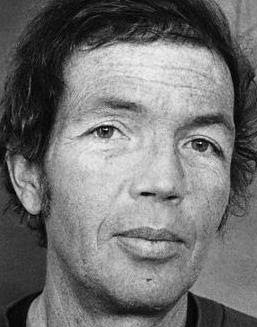 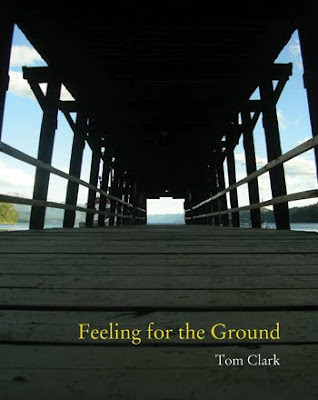