Teenage Bernini tried to sculpt living flames in marble. That his failure resulted in near-parodic representation of martyrdom by fire in no way diminishes the beauty of his rejection of impossibility. I realized fairly recently that this has always mirrored my rejection of the grand social impossibilities trumpeted by demagogues. What I do is tiny. But I wouldn’t want to be without it. Language, our million-year collective endeavor.

I didn’t know how to say it for the longest time, but while the Baroque inhabits my many nomad mansions, I believe it was Lippi who painted the Nativity which impolitely forces my eye stage left, where a peasant, at play with his dog, is missing the whole millenary event. Sometimes I imagine that peasant to be Remédios Varo, or Franz Marc, Lygia Clark or John Heartfield, among others, especially you—is that strange, do you think?—it’s just that we love to experience beauty together. It’s for our sake: the realest beauty is always among others.

Triggering, by turns, in the typing: stray inklings of V. N. Vološinov’ s “stream of speech”—how one’s own tiny impossibility abrades into that murmurous runnel with nary a ripple or knot; a hint of Auden’s “Musée des Beaux Arts” obligatory (“not an important failure”) nod at Brueghel’s Icarus reconfigured here to point away (and thus “impolitely” renounce, or condemn) “the whole millenary event”; and Ashbery, marvelously, too: that direct address of “is that strange, do you think?” (see “Paradoxes and Oxymorons”—“The poem is you.”)—the way it draws the reader right up, tenderly close, so that the final admission pierces right in, a living flame: “the realest beauty is always among others.” I recall, too, recently reading Ron “The Namer” Silliman’s claim that “language poetry would be more accurately called ‘social formalism’” and wonder, who’s zooming whom? Where in the “corpus” of that self-proclaim’d “movement” (il ne bouge guère), a moment so daringly humble (“What I do is tiny”) and moving and direct and conceivably answerable to all?

Daniels’s porous, nomadic (the title page upends the usual map of the Americas, making the U. S. an appendage to a dominant southern continent—in “Other Sources,” Daniels notes: “Brazil is bigger than Australia, yet in planetary terms, writing Portuguese is more or less the same as keeping quiet (Leminski)”) seems to ask by its arrangement that every piece be read equally—“Other Sources” is print’d mid-chap, along with “Acknowledgements” and the finely-paced “* Dedicatory *”:

master the changes
on harmonica, the family of viols
and the categorical imperative
of cleaning our own toilets
however long it takes

No division of labor (even in the structural integrity of the book). So that: one reads the pages titled “Epigraphs” (the half-title page offers its own several lines of Attila Jószef—“What reader would I most want to have / but you who understand your friend through love . . .”) in the manner of a poem, its select’d utterances arranged in a manner radical in its intent, without any smarm or condescending smirking, for maximum semantic pop:

An animal is in the world like water is in water.
—Bataille, Theory of Religion

When a boat reaches a certain speed, water becomes as hard as marble.
—Deleuze, The Fold

If water has been metaphorized into crystal, crystal will appear as softly solid water.
—Sarduy, Written on a Body

Only the difficult stimulates; only challenging resistance can raise our eyebrows, provoke and maintain our powers of knowing, for in reality ¿what is the difficult?, ¿the submerged, so solo, in the maternal waters of the dark?, ¿the originary without causality, antithesis or logos?
—Lezama, Américan Expression

But however much professional poets may be shocked by such carelessness, I consider it an advantage, since our brood of epigonous poets have nothing left but formal polish.
—Marx, Letter to Ferdinand Lassalle

This new art is incompatible with pessimism, with skepticism, and with all the other forms of spiritual collapse.
—Trotsky, Literature and Revolution

“Who do you write for?” means in the first place: “Do you know who you write for?” It next means: “Do the social consequences of your writing correspond to the intentions that animate you while writing?” And for this reason I think that we must maintain and tirelessly repeat the question: “Who do you write for?”; we must even respond in the place of those who don’t themselves respond.
—Georges Politzer, speech to Association des Écrivains et Artistes Révolutionnaires

The present, due to its staggering complexity, is almost as conjectural as the past.
—George Jackson

I aspire to a poetry that amid suffering and helplessness has the power to generate light, any light neither given us nor come down from heaven, but a light born of the hands and spirit of people.
—Ferreira Gullar (paraphrased)

By thinking in images the artist cognizes the world in order to change it.
—Frederick Choate on A. K. Voronsky

. . . not for a seat upon the dais,
but at the common table.
—Reznikoff, Te Deum

The fright of change, not readiness. Instead
Inside our wall we will today pursue
The man we call the alien, take his print,
Give him a taste of the thing from which he fled,
Suspicion him. And again we fail.
—Genevieve Taggard, Ode in Time of Crisis

Domenico: What kind of a world is this if a madman has to tell you to be ashamed of yourselves?
—Tarkovsky, Nostalghia

I yearn for a love split away from power.
—Murat Nemat-Nejat, Eleven Septembers Later

no gesture without a past
no face without the other
—Josely Vianna Baptista, Corpografia

it starts when you say We
and know who you mean
—Marge Piercy, The Low Road

A terrific assemblage, drawn out of no mechanized Google-hoohah—rather, a commit’d subfusc of regular reading, exchange, and examination. The book—it includes a lovely bit of doggerel “for use” call’d “The Birth of a Pejorative” (“We are beginning and end and / you are just the latest ampersand,
/ for one day we’ll learn again . . . we’ll stop thinking like solitary wankers—
/ and on that day we’ll take back what we’ve made, you fucking BANKERS”)— offers up its history under the imprimatur of:

NOTHING HUMAN
IS ALIEN TO ME 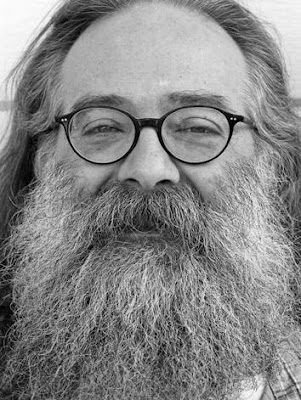