Tempt’d by a little essay of nothing, a larking in the street going nowhere. That’s how the grand puffy apricot-color’d clouds tailing off to Mandelbrot-hump’d cloudlets, some nearly roseate peach-tint’d where the sun’s backlash is hitting—that’s how that is. Though it isn’t that at all. What’s here is a festering, a made intelligibility, a fire consuming the fire of its making. Rhetoric mounting the stump of rhetoric, forever “about to speak.” A way of making the day itself. (Paul Klee says (in The Diaries of Paul Klee, 1898-1918): “Human animal, timepiece built of blood.” And, too: “One eye sees, the other feels.” Though I’d revise that: “One eye sees, the other essays its own frolicsome extravagant gibberish.” Probably what Frank O’Hara, juddering (with flagging intensity) through a dictionary, meant in saying: “Mon ange, tu as un œil qui dit zut à l’autre.”) Klee, too, worrying the availing provender:

Nature can afford to be prodigal in everything, the artist must be frugal down to the smallest detail.
Nature is garrulous to the point of confusion, let the artist be truly taciturn.

Isn’t the fetch’d particular found precisely in the onslaught and slurry? Joan Retallack (in “Wager as Essay”) talks of the essay’s (the writing’s) need “to approach the liminal spectrum of near-unintelligibility—immediate experience complicating what we thought we knew.” One never gets there piecemeal, by constructivist tatting and hammering, no? Isn’t the aim precisely the hell-bent garrulity of the fuddler? Thus the commonplace of the writer who drinks and yammers in lieu of writing—a fine and lacerating substitute, see Shakespeare (The Merchant of Venice):

A substitute shines brightly as a king,
Until a king be by; and then his state
Empties itself, as doth an inland brook
Into the main of waters.

Retallack quotes Samuel Johnson’s definition of “essay”: “A loose sally of the mind; an irregular undigested piece; not a regular and orderly composition.” And Addison’s remark concerning “the Wildness of those Compositions that go by the Names of Essays.” (Calling up Kerouac’s “wild form”—that outburst in a letter to John Clellon Holmes—“What I’m beginning to discover now is something beyond the novel and beyond the arbitrary confines of the story . . . into realms of revealed Picture . . . wild form, man, wild form. Wild form’s the only form holds what I have to say—my mind is exploding to say something about every image and every memory. . . . I have an irrational lust to set down everything I know.” That garrulity—like Faulkner’s “writing on the verge of losing control.”) It (irregular, undigest’d) need not be large, it need only be all. See O’Hara’s Klee squib (out of the Bill Berkson-compiled and edit’d What’s with Modern Art?) where he asserts that Klee “is fortunate in never having done a major work.” In lieu of prodigality: “each individual thought as it comes to us trembling with wit and sensibility seems to be all of him. . . . Some of them are beautiful and amusing, others are phlegmatic and puerile.” And: Klee’s “constant nagging at the attention by petty and often vapid titles is a sign of his own nervousness and of a documentation which is perhaps too thorough . . .” Extravagant minims. Jots of the trembling hymeneal chorister, joining thing to thing with a nudge! See William Carlos Williams’s satyr-wing’d outburst (Paterson) “leading to the rout of the vocables / in the writings / of Gertrude / Stein”:

you cannot be
an artist
by mere ineptitude
The dream
is in pursuit!
The neat figures of
Paul Klee
fill the canvas
but that
is not the work
of a child       .
the cure began, perhaps
with the abstraction
of Arabic art
Dürer
with his Melancholy
was aware of it—
the shattered masonry. Leonardo
saw it,
the obsession,
and ridiculed it
in La Gioconda.
Bosch’s
congeries of tortured souls and devils
who prey on them
fish
swallowing
their own entrails

The essaying swallows its own entrails: one ends up tatting, making a doily for the day, a parasol cover. Is it the result of the contemporary means—info à go-go—that data-plethora with its siren song calling? (One ought return to the hand-scrawl’d notebook, hunker’d between hills, the sun finally “up” and the peach-color’d light gone stellar and vapid . . .) Retallack:

Forms that move the imagination out of bounds toward pungent transgressions piquant unintelligibilities intrude into our tangible surroundings. They maintain an irritating presence, pleasurable or not, as radically unfinished thought. They give the reader real work to do. If the essay is a worthwhile wager, it is about startling the mind into action when much is at stake and intelligibility is poor. 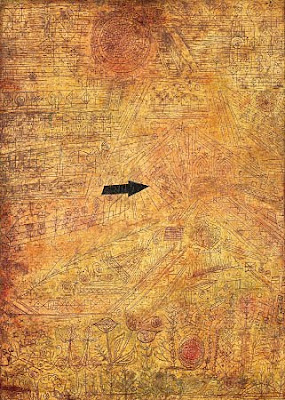 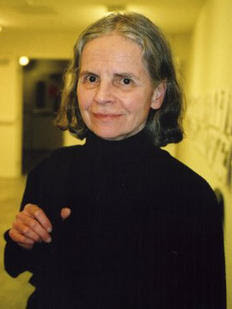