After my few remarks about David Schaff’s 1971 Four Seasons Foundation book, The Moon by Day, Ray DiPalma call’d my attention to Schaff’s editorship of an issue of The Yale Literary Magazine (titled New Poetry 1963) with work by—so the cover lists—Charles Olson, Robert Creeley, John Ashbery, John Wieners, John Hollander, LeRoi Jones, and Robert Duncan. (A list seemingly akin to a snappy aptitude test question: mark the “odd” item in the series—though Hollander’s poem, “How to Remember the Summer,” rather raffishly begins: “Freeze. Judge. Disconnect.”—making a run for New American Poetry-ville—before getting to—ai-yi-yi, cringe-city, putting a foot in it—“Those yvory winters . . .”: i kid you not.) Others (apparently not cover-worthy): David Meltzer, Gary Snyder, Allen Katzman, Paul Blackburn, Carol Bergé, Edward Dorn, William S. Burroughs, and a tiny brave raft of (I assume) student works (Gab Dzuroz, Eric Nightingale). Schaff writes an introduction titled “Some Statements on Projective Verse.” Evidently hewing to Allen’s line in The New American Poetry, 1945-1960—Olson’s preeminence unquery’d—the piece is of note largely for the way it attempts to account for the new. After a rehearsal of Olsonian edicts (“the poem is energy,” “field composition,” “form is never more than the natural extension of content,” “one perception must immediately and directly lead to a further perception,” &c.): “So much for the dialectic. One wonders immediately, however, where the poem stops. Olson is weak on closure.” Or, applauding the “sterner language . . . concrete and direct” (and joining in the poetry wars):

. . . real vision can be lost by ‘watering it down.’ A poet—Robert Lowell, for example—may dilute his material so much that he loses what he wants to say. The resulting poems become long and dull, monotonous, because the poet will not—perhaps cannot—cut away extraneous matter to reach the essence of what he writes. Such a trend, that of overt obliqueness, began with the sonorous rhetoric of T. S. Eliot. In modified form, Eliot’s ambiguity and obscurity, used not half so well, that is, tired out, carry over in many magazine with an in-groupness and cross reference of the poets that kills content, if there is . . . any. (Schaff’s ellipsis.)

Which remark—with a few minor changes—’d serve, too, the present “era” (the codify’d gestural monotony of Silliman’s juxtapositions out of the live sonorities of Pound, say, or the “concrete irrelevance” contentlessness of the paratactic gibberish hoe’d up out of Google—or Daniel Deronda, or Mardi, or The Tuesday Weld Story!—by Flarf-commandos and / or the timid mimic-hybridists in the wake of the Language boys . . .) That old story: the listlessness and endless rehash of the “period.”

Some of Schaff’s assessments. “Ashbery [three poems in the issue: “Maintenance,” “The Adirondacks,” and “The Thousand Islands”] stands over against Olson. Where Olson’s vision is social, Ashbery’s is extremely personal; Olson follows a line, Ashbery’s poetry is full of fantastic surprises. . . . Sometimes I wonder if his extreme faithfulness to personal perception doesn’t leave the reader out.” Schaff calls Duncan [“Sonnet I,” “Sonnet II,” “Sonnet III For Robin Blaser”] “the most literary of these writers” and notes how “opulence in tone can become garish.” Snyder [“Four at Sea,” “The Levels”] “is The New Poets tentative link with Robert Frost.” Schaff differentiates between Frost’s concern “with regional New England and an ironic honesty inherent in its soil,” and Snyder’s “view of the world . . . in which man and nature work as co-ordinate, not opposing”: “In . . . doing something, not just thinking about it—Snyder predicts ‘highest perfect enlightenment,’ a peace and satisfaction.” (See, too, Schaff’s earlier claim that “the name Action Poets [is] sometimes used for this group.”) Regarding Wieners [“Juvenilia”—a lovely poem that is later print’d (Selected Poems, 1958-1984) as part of “Autumn in New York” and titled “Tuesday 7:00 PM”]: “He does not possess the fine rhetoric of Duncan, or the humour and balance of Whalen; yet, more than any other poet mentioned so far, Wieners has a delicacy combined with what Richard Sewall has called ‘the tragic vision of life.’ . . . He does not deceive and his work has a lovely humility and simplicity.” In Schaff’s The Moon by Day one of the “Dedications” reads Wieneresquely thus:

If sex were the lure
of these unhappy streets alone
I’d leave them laughing.
You haven’t been anywhere but desire’s
one-legged messenger
hops after you to hit
you and you alone with his
flowered crutch. The Lure
pulls the devil into heaven,
will it pull us into life?
And what lure,
if Christ is only a catchword
you and I and others
go fishing from and for
an abyss filled with miners’ lights.
The diamond
is what we are seeking
more often than not, love seeks us
and we will have none of it.
A bunch of funky Persians
bearing books and tasty-cakes
come to a delicatessen
and there you are
asking the animals of the forest
to come join your banquet.
But none leave
their contentment for your longing
And why should they?
You draw closer to
disappearing than the veil
meadowlarks in hell
drawn between flesh and what would crush it.
Where you linger
unnetted stars gather rain into
a runic lightfall.
For there’s but one like you in bliss
and few again in wisdom.
Pressure does not lift
curves from your reasoning,
flowers from your mouth.

Echo of one of O’Hara’s elegies for James Dean there at the end—and looking for its precise wording I find a rather amusing letter to the editors of LIFE magazine in the March 4, 1957 issue:

Sirs:
The James Dean necrophilia has penetrated even the upper levels of culture. Poetry includes in its March 1956 issue “For James Dean,” by Frank O’Hara. In concludes thus:

Men cry from the grave while they still live
and now I am this dead man’s voice,
stammering, a little in the earth.
I take up
the nourishment of his pale green eyes,
out of which I shall prevent
flowers from growing, your flowers.

(for the painter, Raymond Obermayr)

Like a distant rumble of undeclared war
the wind shakes all things on our ears
and it’s like the water treatment
or a willful cat how the nerves
don’t anymore fend for themselves.

The base of the mountains
are blue and flecks of moving brown
are there like a lingering image.
But above that base
comes the magenta higher mountains,
steps to green, a rise the eye
can only take, where again lingers yellow
and all runs to a high atmospheric orange
but cut
the deep black blue of
full day.

I know men have perished her
there and all around.

Thus in a cut of all of it
there is the inferno we forget,
descends to the only red of fire.
To go down there is the whole
tension of its mystery.

All lingers. All passes in those hills.

One tempts the perfect
with suggested birds and men
suggested toil, one is reckless
enough to say they are there and forget.
And enough to leave all growth aside.
There is no frame for blue
but blue, but this is a late time
after blue was made.

And the earth herself
lets no such recessions loose.
You can move in the shadows, in that
wild blue, small towns
like specks flourish and go out
there is no coming back from the space
you make.

And, while I’m copying things down, here’s one of Snyder’s pieces (the pleasures of clarity and work and the unhamper’d—unwinch’d up by rhetoric—world):

over the mindanao deep

spray drips on the cargo booms

That, too, I find in no Snyder collection. 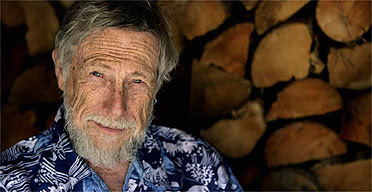