Kent Johnson ask’d that I post the sterling complaint and accusal below—I stand behind it fully. As Silliman notes—rather confusedly—in the same section of The Alphabet (“Non”): “Anger augers altered ego.” To two-handedly bore a hole in wood is hardly the equivalent of prophetic skill, but some word-usages be wholly inexcusable. JL

A Rather Ugly Juncture in The Alphabet

I realize it’s an unusual question, but did Ezra Pound, vengeful and mean as he could be, ever express a longing in his poetry for the death by defenestration of an extant human being of his acquaintance? Could be I missed it, but I don’t think he ever did. Not even in Canto XLV . . .

Believe it or not, Ron Silliman does precisely that, in The Alphabet. On page 348:

if only Eliot Weinberger
had married Carl Andre

How do you say “asshole” in Dutch?

I had come across this passage some while back. I knew of Silliman’s long held animosity towards Weinberger. And I was well aware, to be sure, of how easily mere poetic divergences often mutate into personal vendettas within the avant-garde realm. It’s part of the scenery, as we all know. Silliman’s own personal attacks on other poets are fairly legion (in Leningrad, a book he co-authored with other Language writers back in 1991, he refers to me as a “cockroach,” for one example).

Thus, at the time, as I recall, I dismissed the “asshole” slur as unfortunate in its sophomoric ring, chalked it up as a clumsily satirical moment of score-settling, and kept going. But the full, startling point of the passage had escaped me at first blush. A few days ago, after seeing it quoted in the conclusion to an essay by Jason Harmon (“Looking from A to A: Altazor and The Alphabet,” Jacket #40), the full sense of it finally came plain to me. And so, feeling increasingly perturbed by the intimation, I wrote Silliman the following email (as yet unanswered):

You know, Ron, I just have to say:

Reading that passage again from The Alphabet (quoted by Jason Harmon at the end of his essay in Jacket), I was struck by how creepy it really is. Somewhat shameful, really, in its atavistic insinuations. And I’m not talking about the dumb use of “asshole” in reference to EW, which is neither here nor there.

Though I’m aware of numerous digs you take at other people in the collection (and nothing wrong with that, in principle!), this meanness really crosses a line, not just in what it bizarrely implies about your wishes for Weinberger, but also in that it callously makes play with Mendieta’s memory.

A sad point in your work!

Here is some brief background context for Silliman’s passage: Ana Mendieta was a Cuban-American artist, whose breathtaking conceptual / earth-body / performance work has had a significant impact on the art world since the 1970s and 80s. She is now generally esteemed as one of the visionary feminist artists of the period. She was married to Carl Andre, a sculptor and leading figure in Minimalist art circles. In 1985, as she and Andre were having a violent argument, Mendieta died, falling from the window of their New York apartment. At the time Silliman composed the above entry in The Alphabet, it was widely believed Andre had murdered her, and it’s clear from the passage that Silliman shares the suspicion. After a sensational trial, Andre was acquitted, but questions still hang over the circumstances of Mendieta’s death.

The disturbing implication of Silliman’s passage is clear; and it’s quite clear, too, that any sense of “humor” does not leaven the dark suggestion:

Too bad Eliot Weinberger, the asshole, wasn’t thrown from the window instead.

It is quite unbelievable, when one stops to think about it: A poet candidly wishing, in a poem, that a violent death befall another writer. In fact, I challenge anyone reading this to point to an American poem of the last one hundred years (make that two hundred) that so openly proffers a fancy for the decease—and by murder, at that!—of a fellow contemporaneous figure.

What would lead Silliman to make such a reprehensible suggestion? Perhaps he can add some information that would help us understand. But certainly nothing Weinberger had written about him at the time (or since!) would justify it. True, Weinberger had pointedly criticized Silliman’s Language Poetry anthology, In the American Tree, for its parochial, nationalistic focus—a notable departure, at the time, from the principled internationalism of the historical avant-garde. And he had written some things criticizing what appeared to him to be a relative lack of interest, among the Language poets, in foreign literature and translation. In Sulfur magazine he’d also raised, in advance of similar ones posed by Fredric Jameson around that time, some thoughtful questions about the Language aesthetic and its possible unacknowledged imbrications with the cultural dynamics of late capitalism. But a review of the record shows nothing personal or particularly nasty at all coming from Weinberger towards Silliman. Apparently, though, Weinberger’s measured early critiques were enough to suggest that not only was Weinberger an “asshole,” but that his life should best be terminated. Whether or not others in the Language circle shared—or still share—such obsidian desires, I can’t say. One hopes not.

But I can say that the time has come for Ron Silliman to own up to this utterly ill and revolting passage. It is contained in an important book that is the compendium of half a life’s labor, and its ugly presence will certainly be noted in future studies. And it will be noted, no doubt, that the passage is made even more obscene by the manner its viciousness is cloaked in flippant allusion and paratactic “cleverness.”

Does he still stand by it? Or not? If he does not, will he extend an apology to Weinberger, who, incidentally, since the time Silliman penned his death desire, has gone on to achieve international renown and respect through his work as a translator, editor, essayist, anti-war writer, and human rights polemicist?

I think it behooves him to, and that he should do so publicly and soon. And in the process, he might also offer a heartfelt apology to the family of Ana Mendieta, for so tactlessly using her tragedy as trope for such thuggish assault. We need, as I’ve said before, more satire in our poetry, yes, but we can certainly have that without undue odium that channels a fatwā-like spirit. 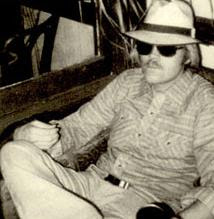