CCCXXXIV
My monstrosity tugs
the line taut
like a hook’d
dingy tench going
deep to tangle
itself in green
elodea. A quibble
no cause for
the anxious remedial
hush, a reversal’s
not a casual
errancy. I think
it’d be dirtie
is how she
put it, unaccomplish’d
at the specious
sexual snare. Stuff’d
a bacon down
my pants, pack’d
up a picnic
for the boat-
ride, slipping contrariwise
between two cabin
lockers I’d bang’d
the locks off
with a ballpeen.
Ah, the skew’d
dark realisms of
the heraldic brat.
The sphere of
the perceptual keeps
narrowing: klieg light,
individuum, the randy-
making shots of
sweet genievre with
the laundress Mehitobel.
Life is such
a gloriously unstable
thing to us
contra-vendible swifties,
us pudding-generous
nymphos, us stable-
boys like me.

Jeff Clark’s Ruins (Turtle Point Press, 2009)—nigh-Gesamtkunstwerk (if that means “total work of art”) with its slews of reversed black pages and smeary muss’d photographs (of flower-needling hummingbirds, of garden tangles, of dogs with war-grins, of a wonderfully pensive little girl in a sewn cotton shift), with its titling that looks like words emerging out of watery muck-emulsion Sally Mann-style, with its tender and angry Clark poems and its excellent Louis Aragon translation—arrives bound in slightly dirty white linen-ish boards, and black, black end-papers. A smallish limit’d edition, print’d to accompany an exhibit chez Turtle Point of Clark’s “book covers, collages, wood constructions and paintings.” (Exhibit’d, too, two collages made by Clark for John Ashbery’s forthcoming new book, Planisphere.) One senses a nigh-religious structure to the book, clench and release of the blood pump, the sinner redeem’d, or the anger undone, that contracting systole to drive forth demons. Here, in the form of “Four Fathers”:

My old man was a dead man
He was too young
My old man face and ass
Thin dark white man
from Long Beach, Los Angeles, Colorado
Thick-armed stud from the ground
Money, family, I don’t give
a fuck about yours
Don’t give my money to dick films
My old man was a roach, a casanova
Got you high, made you strong, knows
art, reads poetry
His house burned, he lost a wife then a son
My old man made sex of anything
We’d go out in the garage, I’d jump
rope and come for money
The lights would be dim in ghetto stadiums
And acts of testimony
My old man snuffed out a daimon
Strangled it pig daddy
At a lumber yard in Yorba Linda
He snarled at a man he’d meet him out front
When we did it was a group
“You gonna mess with me now?”
I stood silent behind him, I was seven.
How I wanted to lunge, and wept
Big beige dream wrecker
The other one, remember him, you should
have thrown him against a wall
kept his smack in folded-up fashion ads
I’m each of them, and in my garden
Nowhere else to go, to eat
muscle, music, to excoriate—
A child comes in too late
She’s the one I’ll never love more
Than in this cold poem I find her
My old man was a dead man anywhere
a mattress was in a photograph
He lives in a house in
Berkeley I’ve never seen
He lives in a house I’ve been to twice
He’s dead in a Burt Reynolds
movie with my face
In a garden with a little girl
assembling a bouquet
My old man drives a red truck
My old man drives a Cadillac
The butterfly weed and calendula
Seeds she sewed at three
are blooming
My old man was a dead man any day
a boy was waiting
I don’t know what kind

Ungainly, direct, and absolutely without preciosity or smarm. And heartbreaking. What’s recall’d is the kind of fuckall anti-literary messiness of Jack Spicer, the plunge of a relentless going for, “sewed” for “sowed,” no matter. If at “pig daddy” one thinks of Sylvia Plath’s “Daddy” that’s not the point, if the repeat’d “My old man” riff ricochets back in the brain cavity off something out of Anne Waldman’s Fast Speaking Woman, so what. What I like here is a refusal of the current mode of quasi-surreal, quasi-“analytic” (meaning the unanchor’d abstract) hybridity. Clark’s plain (and fierce) willingness to brave the sentimental weathers is admirable and necessary in such a climate. Here’s the final piece, “Remains”:

So long I was hungry
for your love, and lonely
when it didn’t come, which was
always. Now I find love in others,
doves, daughters, lovers.
I feel you every day,
fury at what you could not
love, or take care of. I’ll meet
you in heaven where I won’t
live but will visit for its wine
and warm winters.
I’ll love you even then
as I love money, tin,
to crave, dark days.

Which spills its guts and erects a questionable marker there, something temporary like a Quonset hut.

Just to note, too, how terrific Clark’s translation of Louis Aragon’s “Poème à crier dans les ruines” is—veering off a literalism only when sticking too closely’d result in exactly the kind of affect’d refinement Clark’s at pains to avoid. The poem begins “Let’s spit you and I let’s spit / on what we used to love / on what the two of us used to love . . .” Here’s a few lines out of the middle, the French:

It’s nothing but a joke to those
who talk about love like they talk about a cousin
Fuck all that pretense
Do you know when it truly becomes a story
Love
Do you know
When every breath turns tragic
When the colors of daylight provoke laughter
A draft a shadow in shade a name erased
Everything should burn and you know deep down
that everything does burn
and you say Let everything burn
and the sky smells like scattered sand
Love you bastards love for you
is when you happen to sleep together
Happen to
And afterwards Ha ha all of love is in this
And afterwards
we happen to speak of what it is
to sleep together for years
Do you hear
For years
like sails collapsing
onto the deck of a ship loaded with plague
in a movie I just saw . . . 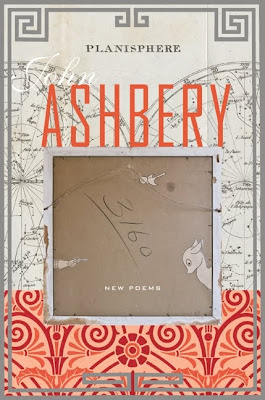 John Ashbery’s Planisphere with Collages and Design by Jeff Clark

I see the (normally) astute Caleb Crain is reduced to quoting Ron Silliman as “literature” in a squib “Against Camel Case” in yesterday’s magazine “supplement” to The New York Times. I suspect Mr. Silliman’s mighty pleased—mention by the object of one’s raillery (to say nothing of desire) always stirs the tickle-color’d pink of the arriviste’s flesh. Mr. Crain’s quote though—the piece is a finicky polemic against the use of (admittedly ugly) InterCaps—rather chops La Silliman’s lines to near nonsense. Crain writes:

The original makes it sound (thankfully) somewhat less likely that—for all Silliman’s big oyster clamor and originality-insistence—he’s laying claim to the invention of “proper” (“where I belong”) sex. (Or that the “I” is anything lettrist or capital or more than the conventional phallogocentric “I”—comme on disait à l’époque—of Baleful Lyricism 101. What Silliman wrote is:

InterCaps: deviance or innovation? How sweetly, smoothly I slip inside of you where I belong. Cat sleeps in the unused driveway, concrete warmed by the sun.

Flabby imagism. Crain, too, is forgetting Frank O’Hara’s masterly use of the InterCap in “Poem Read at Joan Mitchell’s”:

Sending “up” the usage (and the whole idea of nameable “institutions”—like marriage, like the avant-garde, like orthographic conventions) and doing it avant la lettre! That’s O’Hara. Compare that to the Hüsker Dü earnestness of Silliman’s “I slip”—neither deviance nor innovation.