CCCVII
The mutt we got
we call’d Some Zeitgeist.
You begin every day
with that kind of
knowledge pushing at you
like a mountain with
a fat stripe of
clouds skirting it, or
with a bonus outcropping
shaped like a carbuncle
just where the tree-
line peters out, and
see how quodlibet innocence
itself becomes a grunt
heterodoxy. Such a climb
in such a clime,
is how that swindler
the geographer put it,
plunging a witch-hazel
dowsing “wand” into milady’s
nosegay. I kept up
a lookout for that
golf-capped and liver-
spotted Russian monsieur with
the enormous net. He
wields what he thinks
of as bonhomie with
a martyr’s petulance, and
waves tiny white grub-
like paws. No matter,
several insurrectionary-confect’d gasoline
bombs’ll likely out-maneuver
any such baffle of
digress and attending, expunge
the raffish meander of
the unpoliced and indirect.
Come on, pup, time’s
on nobody’s side, we’d
better run for it.

Ah, days curtail’d by errandry and scrambling madness. I keep thinking about Kit Robinson’s remark in The Grand Piano (#8): “In fact at thirty-three, I had never held a full-time job.” And its wholly recognizable unpacking:

That, against the later “model” when—everywhere—“writing would have to be stolen from the jaws of the work week.” So one figures out how to rifle the system for its moments, and every sortie’s half-assed, writing’s mark is its hurry, its beleaguer’d full-tilt leisure-starved tempo. Or industry itself becomes a stand-in for a writing fed (slowly, languorously) by the contemplative fats. It’s as if writing’s mad onslaught of over-production (of late) is the indirectly proportion’d result lost opportunity, a compensation mania.

Some substantial part of Robinson’s “entry” here is the promulgating of a way of looking at language (and Language poetry—“rip-up-and-recombine methods of writing”) by means of an extend’d metaphor, one rather telling in its particulars. In miniature, it goes something like: “The experiments in writing that took place in San Francisco in the 70s paralleled the rise of Silicon valley to the south. In both enterprises language was broken down into its component parts, which in turn were reassembled to create new possibilities.” Robinson might’ve said “new products.” Or, in Robinson’s “business career” language:

The information technology industry came to illustrate for me the dynamic effects of language on everything that happens. In the typical software company, the basic intellectual property is itself language, that is, code. Every software program can be reduced to a text, a compilation of code line, which themselves are finally nothing more than a series of zeros and ones. In order to sell product, responsibilities are assigned for packaging the software into modules, applications, and portfolios complete with naming conventions and pricing, based on input from customers, partners and prospects. This is called product management. Then you have to develop stories to excite the market—use cases, features, benefits, and differentiators. That’s product marketing. And finally these ideas must be integrated into the high-level story of the company itself, its value to customers and its claim to leadership in the marketplace—corporate marketing.

Is it possible to read such a summary of “sell product” maneuvering and not think of the “corporate marketing” aims of The Grand Piano itself? For what is the “Experiment in Collective Autobiography” finishing up “as”—if not a sustain’d marketing “assault” (to reiterate a Robinson line of supposed digerati / poet difference: “while the engineers deployed their aptitude for logic, writing commands driven by strictly hierarchical, if-then structures, the poets pursued a more reckless course, launching an aggressive assault on received ideas and experimenting with disruption to liberate the spirit of creativity”—the military / industry lingo itself is telling)? Robinson remarks (immediately following the sentence referring to “the high-level story of the company itself”) how—market savvy—“As you move from engineering to product management to outbound marketing, the emphasis on simplified communication increases at each step.” Hence, one assumes, the transparent, instrumentalist discourse “flava” of the Grand Piano booklets, all the better for selling it to “us”—bounders and hoi polloi. (Note the palpable nostalgia for the “less formal encounters at readings, parties, and visits in various cities coast to coast” before the Language “field . . . merged with others and expanded to comprise an ecosystem too large to define in a single view.” “As Doug Lang recently noted, back then we pretty much knew who and where everyone was. Today that would be impossible.”)

One query. In Robinson’s final paragraph, he writes of the way “arts and letters are transforming themselves through the convergence of information technology, telecommunications and media.” Then:

As with previous innovations, including the Internet, there is an initial flattening effect as given hierarchical systems, such as editorial oversight, are dispensed with in favor of collaborative content development. Be that as it may, the new communication platforms also enable new forms of experimentation and critique.

“Be that as it may”? Indicating what? That Robinson accepts that “flattening effect” rather grudgingly? That he possibly opposes the blindsiding of the “oversight” systems? I don’t believe that—and suspect the final sentence is one of awkward shuffle-off-to-Buffalo concluding statement, the kind of thing drill’d into “our” brainboxes by high school English teachers c. 1971: you can’t just stop. 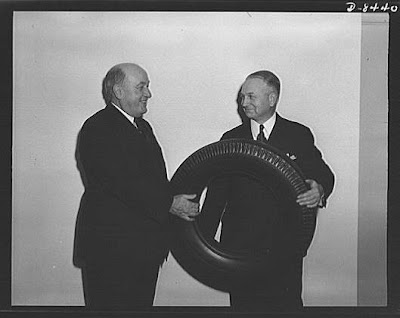 “In order to sell product, responsibilities are assigned . . .”