CCCXX
Some big orchestral
tutti of sun
hitting a red-
throat’d rubato, a
high unmaestro’d O,
a disc shot
through with timbre-
flaws and scuff
marks of aimless
careening angel accidents.
Wash and backdrop
for the morin
khuur’s two horse-
hair strings bow’d
by a Mongol
horseman who is
deftly intersplicing earth
(the fatter string)
to sky with
a series of
incendiary runs up
into the high
unbinding joyousness of
thrash Guignol farce,
stuffing the air
itself with notes.
A series of
petites blagues musicales
prepping the devilish
assemblage for one
long-song’d syllable
that, unaccompany’d, wholly
unhinges the two.

Thrash weekend, here and there. Uncover’d a tiny cache of heroic-era Abstract-Expressionist artbooks, including a number of little Grove / Evergreen Gallery books, the first, Dubuffet by Michel Ragon, translated by Haakon Chevalier, dated 1959. (Thumbing it I note the sentence, “In 1922 he did his military service as a meteorologist in the Eiffel Tower” and think immediately of O’Hara’s “Naphtha”: “Ah Jean Dubuffet / when you think of him / doing his military service in the Eiffel Tower / as a meteorologist / in 1922 / you know how wonderful the 20th Century / can be . . .” Composed, apparently 3 September 1959. Now, I ought to read it to uncover “Jean Dubuffet painting his cows / ‘with a likeness burst in the memory’ . . .” Not evident in a slapdash peruse (an oxymoron), though there is:

“Art and levity,” Jean Dubuffet wrote at the beginning of his ‘public life,’ “these two orders have blood in common. The unforeseen, the unwonted, is their common domain—and don’t misunderstand me, it is of the highest peaks of art that I am thinking. Of Poe’s tales, of the Chants de Maldoror, of the Easter Island statues. So none of those innocent little jokes that entertain you for a few minutes, but the great big ones, the ones that freeze you on the spot, that turn you to stone. So good and unforeseen are the jokes.
“There is no art without intoxication. But I mean a mad intoxication! Let reason teeter! Delirium! The highest degree of delirium! Plunged in burning dementia! Art is the most enrapturing orgy within man's reach.
“Art must make you laugh a little and make you a little afraid. Anything as long as it doesn’t bore.”

Which sounds like O’Hara’s credo of wit slung against the boring: “how boring are men of deeds to the wild passions of fugitive verse” (“Historical Variations”), “Only you in New York are not boring tonight” (“Poem Read at Joan Mitchell’s”), &c.

Another find: the B. H. Friedman-edited School of New York: Some Younger Artists, (1959) with Barbara Guest on Robert Goodnough, James Schuyler on Alfred Leslie, Fairfield Porter on Richard Stankiewicz, and O’Hara on Larry Rivers, among others. The O’Hara’s something I don’t recall seeing reprint’d, though in a tumult of the double-shelved, I didn’t locate the Bill Berkson-edited What’s With Modern Art? (Skanky Possum, 1999).* How it begins:

American painting is in such a splendid state of confusion that it is a joy to contemplate. Would that poetry were in the same state! And perhaps it’s approaching it, for the reasons for loving a poem by Allen Ginsberg are the same reasons for loving a poem by John Ashbery, or by Kenneth Koch, or by Gregory Corso, just as the reasons for loving a painting by Franz Kline are the same for one by Michael Goldberg: they are all distinct, individual responses to distinct, individual meaningfulness—which varies so widely in scope, in drama, in contact, that the engaged person is reeling at last from contact with his own life, contact which the rest of society tries to teach him to back away from like a sick leopard who doesn’t know which trainer has his best interests at heart.
In this pocket-abyss where one doesn’t know where one is at, where a large red painting may be a Grace Hartigan or a howitzer, where one has nightmares about not knowing what one is looking at, the only thing you have to hold onto is your own natural savagery, and your ability to recognize your own natural savagery has been given to you by this art which in turn is the cause of your anxiety about not being able to recognize anything but yourself. And that is the last thing one wishes to recognize. Most of us would much prefer to be Zen neophytes identifying herbs.
Much has been said about the work of Jasper Johns recently—but how anyone can find his big white flag painting enigmatic is beyond me, a painting which forces a recognition in me to where I am at the brink of hysterical tears when my movie-fed head is inclined toward the Raft of the Medusa. (“Boys! Don’t leave me behind!”—Palinurus.) The same thing occurs with De Kooning Suburb in Havana. Why should it have this overpowering effect when we have the House of Seagram in front of us?

How different to the present dander’d up era! Where O’Hara makes a valiant camp’d up call for additional confusion (“reeling at last”), today “we” see our hog-tied critical delivery boys (and girls) with, not only a lack of “anxiety about not being able to recognize anything” (but themselves), but flaunting they own fervent blindnesses (and calling it “lineage”), or shucking it off into some cloister’d booths set up for a two-party “system.” “Natural savagery,” indeed. Tepid careerist me-first though remember to nudge along anybody who’s getting huzzah’d up, go with the groundswell, is the “order” of “business.” “Distinct, individual responses to distinct, individual meaningfulness,” whazzat? Rank and file sycophancy to the left and right: a clumping generalized sick leopard-dom.

* Andrew Epstein writes that the piece is reprinted, in Standing Still and Walking in New York under the title “Larry Rivers: The Next to Last Confederate Soldier.” Ah, memory, that savage slouch! 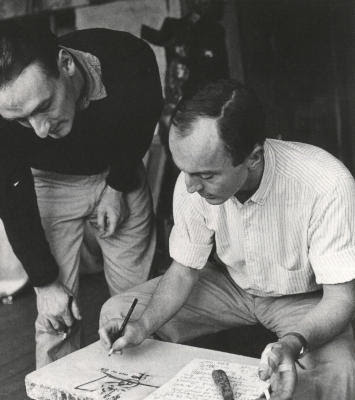 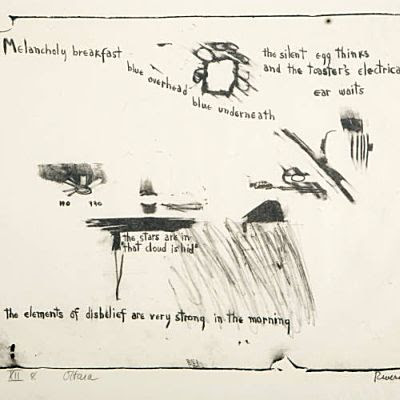