CCCXVI
That doe not
do the thing,
hubbub considerably, etc.
My exegetical slop
compensatory notes, a
way of dogging
mock big ass’d
human mutuals down
nonnunquam alia et
interdum Visigoth mi
scusi whatev unspoilt
country roads ending
up nosing ev’ry
crevasse and crevice.
My Augustan cravat
emblazon’d with honesty’s
roguish pluvials, shirt-
waist and liver-
color’d Budapesti cummerbund
dry and salvageable
with its God-
pittance buttonhole reinforcements,
keeping it secure
“out behind.” I
do doubt that
anything of merit’s
likely to be
achieved by ransacking
the castoffs, unsatisfy’d
by the yellow
leaf’s way of
lying dumbstruck by
imminent microbial assault,
a sense of
mortality’s no reason
to begin acting
like a toy
martinet with bust’d
britches, is it?
Vnmoued, could, and
to temptation slow:
isn’t that impermeable
by the garden
gate yours? Such
sulky intransigence converges
wherever it lies
unprepared, unsampled, damp.
It’s there you
buriest thy content.

Sort of a “pause in the day’s occupations” kind of thing. Tired of limning pretties. Long I suspect’d that I am constitutionally incapable of sustain’d seriousness “about” nigh-about anything. Art, even tremendous art, seems as likely the result of doink-around dishing and goofing as any pursed-lip earnest crouch of pre-triumphalism. Here’s J. D. Reed (“born in the railroad town of Jackson, Michigan, shortly after the trains stopped running”):

You tell me time’s to fuck
not fuck away; but my business
is the exact temperature of magma,
the p.s.i. of Whitman’s old lips
on the mouth of some feverish Confederate.

I have tried to deal with that layer of experience that lies between a Buster Brown shoe and the terrible foot of Christ. The crackling skin of a good pork roast is the only thing keeping the blade from the meat. The heavy air cuts us open.

I dug out Fatback Odes after noting Reed’s sub-editorship of Stony Brook. Truth is, he squib’d a tiny appendum to Dahlberg’s note, huzzahs for Dahlberg’s way of “charging rhetoric with the beat of the goat-foot”:

. . . Argument needs its ornaments to praise as well as damn.
An over-concern with thought, concern with it as naked, ultimate activity produces that kind of talk Hemingway called a flywheel with the counter weight gone. And if we find that argument dances, then the prose that expresses it must dance also, and that means, at least, it has its own rhythm. Find even a tub-thump in the quarterlies, if you can. “We cannot perceive what we canonize,” says Dahlberg about Thoreau, “The citizen secures himself against genius by icon worship.”

And Dahlberg himself: “The purpose of any author is to be artistically mirthful; for no writer can persuade who cannot entertain. Chaucer observes, ‘A licorous mouth has a lickorish tail,’ which is a didactic as well as a jolly line.” Too, in the Stony Brook (pick’d up for a buck with some tiny shine of making it centerpiece to contend that during some few years between the anthology wars of the early ’sixties and the new dispenses of petulance and manner’d agressivity brought up by the Language boys some few years later—that some period of détente prevail’d—akin to today’s “hybridity”?—see the (partial) list of contributors: Pound, Duncan, Levertov, Olson, Rakosi, Wieners, Snyder, Louis Simpson, Simic, Laughlin, James Tate, Ammons. Pickard, Eshleman, Tim Reynolds, Antin, Rothenberg, Mac Low, Rukeyser, Jim Harrison, Dahlberg, Paz, Ginsberg, plus a sizeable bunch of translations, Tang poets by Robert Dana, Vasko Popa and others by Simic, Miłosz and Aleksander Wat by Richard Lourie, Radnoti by Stephen Berg and S. J. Marks, Yvan Goll by Galway Kinnell, Robert Pinget by Raymond Federman . . . nothing narrow about it.) Too, therein, J. D. Reed’s longish “Tool and Die Poem,” limning a certain moment in the anthropology of working class life in Michigan:

the bridegroom already half mad—
nightmare of UAW and contracts

the girl-child,
the majorette strutting
down the limed yard lines
at morning practice
pumping her baton,
showing blue panties
to the band drunk on vodka.

Another couple out of Fatback Odes:

Too late for second sitting,
the waiters study a map of Bosnia.

Ingested soda bread, salmon from Rumania. . . .
A woman over vodka said
she’d “been” with Tito.
But I know Tito’s glove,
the stench of its rabbit fur lining. . . .

Sure, whetstone of peasant on saber.
You don’t forget these things—
The Blue Rabbit,
peffered saddle of hare
and the small muscles of it,
the brass clams and tin wine.

The Ashanti invented
rip stop nylon
for Hillary;
dried raisins,
tropical chocolate
and here I am, vibram,
strapped to a TX-140
magnesium pack frame,
almost to the garage.

Contributing, one supposes, to what’s becoming rather a burgeoning tradition of exposing the neglect’d (to the harsh light of the present—I did “skip” Reed’s poem with the line “And night fell like a bull dike / on a girl scout”—there is that kind of datedness that becomes most obvious if one quits mid-song . . .*) And, looking around for other likely Reed-holes, I pull’d Kayak #23 (1970) off a shelf, and lit up to its pertinence. Without examining the archives, I don’t know if St. Geraud’s “appraisal” is of the “routing out the neglect’d” sort, though I’d bet it is—Lamantia’d probably hold some kind of record for being periodically rummaged up out of torpor by the high-mind’d. (If so, then St. Geraud’s petulance here looks mighty silly.**) A letter, then, to Kayak editor George Hitchcock (a fine American surrealist himself), dateline “Watsonville, Cal.”:

I can’t help but agree with St. Geraud’s generous appraisal of Lamantia (Kayak 22). And Louis Simpson is also a great poet, God knows. But the trouble with them, indeed, with most poets is that they aren’t flashy enough. . . . Lamantia needs a much more identifiable image; needs to become a brand name, a household word like Ex-Lax or Agnew or Band-Aids. Poems like his “Inside the Journey” and “The Enormous Window” wouldn’t be ignored if he could just see his way to advertize himself as the psychedelic super-poet or something that would have the same stimulating effect of the confused consumer. . .

When I think of the resourcefulness of such contemporary prime-time giants as Lafcadio Dogbreath, the inventiveness of such a devastating sensibility as Arshile Smegma’s, I wonder if much of what is called public neglect isn’t artists’ neglect. Can you deny that the divine Lafcadio would not still be languishing in his San Fernando gameroom had he not contrived to present his magnum opus carved on a seven-ton block of ear wax?

Why the poet permits himself to be neglected is a mystery to me. Why, for the sake of art, couldn’t Lamantia get himself arrested for committing an unnatural act with a mail-box? Couldn’t he begin a rumor that his father was a Cossack and his mother an abalone? A simple matter. Or couldn’t he free fall into a garage full of flaming Kenyon Reviews? He could claim to be two centuries old or a text-tube experiment. But that’s the trouble; some poets have no initiative, are lacking in dignity, strength of character, self-respect, honor, righteousness, self-esteem, integrity, decorum, etc. Why couldn’t the “neglected poet” honor the holy Smegma’s memory and do himself honor as well by marrying a llama?

Yours for dignity in art,
Msgr. Junipero Balalaika

P.S.—Does he play the guitar?

One wonders if some of the “current crop” of brand-name versifiers didn’t read Msgr. Balalaika’s letter and take it unreservedly “to heart”?

* Looking for a picture of J. D. Reed, I find one in a 2005 issue of a Princeton, NJ weekly accompanying an obituary. “A poet, novelist, and journalist, he had three books of poetry published in the 1960s and won a Guggenheim Award for his book Expressways in 1970. He taught creative writing at the University of Massachusetts in the 1970s and was the director of the Creative Writing Program there for several years. In addition to his poetry, he had two novels published, one co-authored by his wife, and one made into a major motion picture. He then pursued a 25-year career in journalism, writing for Sports Illustrated, Time, and People magazines along with freelance articles and cover stories in many other national publications. He retired from Time Warner, Inc. in 2001 and continued his freelance journalism and personal writing projects.”

** “Bill Knott (1940-1966)” wrote in a letter in Kayak 22: “The best poet to appear in the 1940’s was not Lowell or Berryman or etcetera, but a teenage boy named Philip Lamantia. Because of the fascistic literary atmosphere in the late 40’s and early 50’s, he did not receive the attention he deserved. Perhaps because of this neglect he drifted away from Surrealism into other things. Now he has returned to his original vision and is currently the best poet in America. He and Louis Simpson are my personal favorite poets.” And, later, after mentioning “a new one [Surrealist] . . . Franklin Rosemont”: “Rosemont is serious. The rest of us, except Charles Simic, are full of shit.” 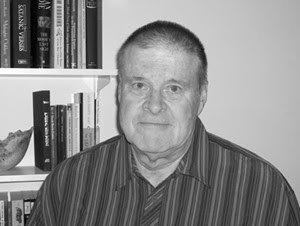