CCII
The pineally-hued whites
of the Aegean, soul-
raking, micro-tenant’d—stain’d—
by the lost blues
of the Homerids, that
bankrupt society of variance-
chasers, epigones and punks.
I draw lots, deliberately
blank. The high stony
meadow holds one horse,
one swallowtail, one swooping
pugnacious yellow-throat’d bee-
eater. The ouï-dire
sea hides the spiny
urchins, Echinoidea, les oursins,
the sea with its
unhesitant vulgar yes, yes.
The skeptical sky reassembles
the invert’d black anvils
of its havoc, hepped-
up Hephaestus, bulge of
the forge. I am
caught like a catamaran
skimming between opposing heavens,
the shorn generatrix of
one inadequate word quivering
against the next, jelly
in a tank, dithering
a calligraphy of nay-
saying, squeamish and book’d.

Nobody reads poetry. One jumps into the ape-house, pounds a pneumatic rhythm out, scoots up the nearby “tree.” C’est comme ça, la poésie—bête et soupçonneuse. Insert symbol. Sense of hitting a wall: accrue’d antagonism with oneself resulting in both “obstinacy of aesthetic comportment” (Adorno) and plunging abject-status. I drool in a corner. I scratch my privates publicly. Loss of criteria and fear of the open door. Lessening of social commitment, ha ha ha, ha. Books? I put books against my face to block out the sun. Ah, ah, aberrancy, it disfigures the rollicking tongue.

So, grumpy with doubts, one reads of Olson’s stickler, warring against Eliot’s “pseudoparticularity” (that, a word of Ralph Maud’s, in What Does Not Change: The Significance of Charles Olson’s “The Kingfishers”): “Particularism has to fought for, anew.” Olson insisting (“Human Universe”) “that a thing, any thing, impinges on us by a more important fact, its self-existence—the very character of it which calls our attention to it, which wants us to know more about it, its particularity. This is what we are confronted by, not the thing’s ‘class.’” Olson’s worrying Eliot’s “The Dry Salvages”—the lines “Lady, whose shrine stands on the promontory, / Pray for all those who are in ships”—he sends “Pound a picture postcard of the statue of the Lady of Good Voyage on top of the Portuguese Church” in Gloucester, with the line: “Here is my Lady that Possum stole.” Writing = turf war. Three years later he’s niggling (to Creeley, a 1950 letter) the same: Eliot’s “use of my, my madonna, buono viaggi, Gloucester, and how he misuses it, is riding, is generalizer”—and proceeds with the Maximus Poems:

(o my lady of good voyage
in whose arms, whose left arm rests
no boy but a carefully carved wood, a painted face, a schooner!

So: blithering “generalizing humanism,” imprecise vaguenesses, the bull-dozed flat lack of the point’d particular. (An argument for the particularity not of things, but of words—arguably, a formally empty particularity buoy’d up only by sheer self-attending materiality (“Look at me!”)—occurs to me, is that where “we” be today, constructing with our doodads and wit the vessels of our distraction-unto-death inability to cotton to anything beyond the flibbertigibbets of the sign?)

Pound, in Angoulême with its “niggly” cathedral (in Richard Sieburth’s A Walking Tour in Southern France: Ezra Pound among the Troubadours) complaining about “a tendency to germanize”—“realist” particularity rampant in the nineteenth-century novel:

Not everything is interesting or rather not everything is interesting enough to be written into novels, which are at all but the best a dilution of life. It is excellent doubtless for future sociologists that certain diagnoses of certain strata be recorded, but it is work for encyclopedists or else it isn’t . . .
The use of dogma, generalities, inexact “ideas” had led to such a general ignorance that the impressionistic or realistic method was the only escape from it. But now we are come upon the obverse, a tendency to germanize which is philology or novels or what you will,—a failure in synthesis, a failure to recognise what is a type, a failure to see where description of a thing is worth while either because it is normal or because extreme.

A jumble, Pound’s notes. I like, though, to see the two ruses—particularity and its lack—opposed.

Periodically today I am going to try to get a particularly rippled slice of bacon to lie flat enough in the brainpan to cook—Olson’s: “the narrative that gets started begins to be the story that will yield from the object a raison that causes us in the first place to give our attention to it.” (“Under the Mushroom,” Muthologos I, quoted by Maud.)

I go many places, wakka

I go many places, wakka
wakka wakka, unscrew
many faces, wakka wakka
wakka, tears for the coffin’s
delivery to barracks, tea-
cher thrown out the win-
dow, out of state, her son’s

I’m glad for waste, its
ascension, its emotional arc
into the prose of governance . . .

Opening lines of “I go many places, wakka,” out of Anselm Berrigan’s To Hell With Sleep (Letter Machine Editions, 2009). Longing to think that that “wakka wakka wakka” erupt’d as pure non-negotiable sound—childish lingual “noise” beyond writing. I think, though, it’s coming out of Muppet Fozzie the Bear, something of a fail’d comedian. Or Pacman.

[Correct’d by a reader who points to Nigerian singer Fela Kuti’s “Coffin for Head of State” as the source of the opening lines of “I go many places, wakka.” Thank you.] 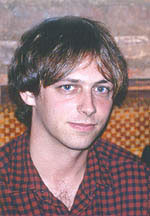