CCIX
Enough rascality: the bluff is
call’d—specimen and prospect—I
ditch the research, gauge of
no desire. “John Latta is
sipping a can of beer
in the light diabolique of
a snuff’d-out purity.” “John Latta
is reading Le livre des
fesses.” A dungaree’d toothless
Joe says he is trying
to put together three dollars
for a hamburger. I like
the winning particularity of that
statement. “John Latta isn’t one
to grab insidious kinds of
unembellish’d attention-gettting for block-
heads devices in a ragged
consumerist dash for a blockbuster
substitute.” Or to so poorly
sort the Bollywood refs, non-
cronyist shutterbug miasmas, the way
embedded’s come to mean bought
off. Net gain: zero. “John
Latta, is that pert way
you do up the disastrous
turgidity a kind of combable
soap?” That shark-fin saw
blade running its teeth up
to sunder the amygdaloidal skull,
is that the Mohawk you
so savagely desire? “‘Nervousness because
love, and appetite, its throttle’
is the beginning of something
John Latta did not finish.”

Finish’d up José Manuel Prieto’s Nocturnal Butterflies of the Russian Empire. One stylistic beaut: the narrator’s obsession with letters, to the point of seeming to exist in a world where one’s emotional limits are mark’d solely by literary-historical epistolary exchanges:

At that moment, I felt utter dismay and also an ulterior elation, because “More than anything in the world I fear honest women and high-flown sentiments. Hooray for grisettes, fast and easy . . . ,” as Pushkin says in an 1827 letter to Zinaida Bukovski (his lover, we have to assume).
Here in Livadia I came across a description, in a letter, of a fear I might have felt, but didn’t. It was a letter from James Joyce to Nora, his wife, and he really went to extremes (the poor man). A letter dated September 2, 1909, and postmarked 44 Fontenoy Street, Dublin: “I have enormous belief in the power of a simple honorable soul. You are that, are you not, Nora?” The pathetic tone, the tremendous desire to believe the opposite. Nora Barnacle? My God! The whole world knows. Someone should have warned the unhappy writer. Less madness, less experimentation in Ulysses, I’m sure.

The foible allows Prieto to drop in exemplary and pertinent mots willy-nilly, constructing a kind of musculature of words against which the story of the narrator’s obsession with V., a Russian woman, a big-money prostitute trapped in Istanbul (he helps her escape) is played. The letters (house of cards) even begin to comment on other letters. Here, the letters of one Ghislain de Busbecq provide a story of Roxana (or Roxelana, or “La Rossa”), a slave who managed to attract the attentions of Suleiman (“the Magnificent, the emperor of the Turks”) to the point that he marry’d her—whence she turn’d against him and organized a revolt. Prieto:

Imagine how Suleiman felt about this woman, as completely bewildered as de Maupassant was by Maria Barkishev when she first wrote to him. Barkishev, a young genius—or wunderkind—initiated the correspondence in Paris in 1882, sending him a letter without revealing her identity, without telling him that she was Russian—and a woman. Her letter confounded the writer; his astonishment at her complex design must have been like Suleiman the Magnificent’s at Roxana, and mine at V. In a single letter, and what’s more in a single paragraph, the young woman had bombarded him with names: “. . . you gave me quite a start, madame. Without any warning, you launched a volley of quotes from G. Sand, Flaubert, Balzac, Montesquieu, the Jew Baahron, Job, Spitzbube, the Berlin scholar, and Moses.” De Maupassant guesses the “mystery lady” must be “a sixth-grade teacher at Louis-le-Grand.”

So one reads snatches of letters by Marfa Brown (another prostitute) to Dostoyevsky, or by one Alciphrón, “third century A.D. . . . about whom nothing is known but his name” (he writes, with “Dionysian frankness,” of “a competition between Thryallis and Myrrhina, to see which had the softer, the better ass”), or by Nadezhda von Meck, “the rich widow of a mining engineer” who wrote regularly to Tchaikovsky (and bestow’d him with an annual pension) “with only one condition, that they never meet.” (Tchaikovsky, learning of von Meck’s presence in Florence, panick’d, writing to a brother: “I constantly have the feeling that she wants to see me. Every day I think I see her walk by my villa, stopping to try and catch sight of me.”) Or by Karen Blixen (“Regarding lions . . . I can only say that I do not believe that any normal person can live in lion country without trying to shoot them.”) The world’s a wadded tissue of citational debris. 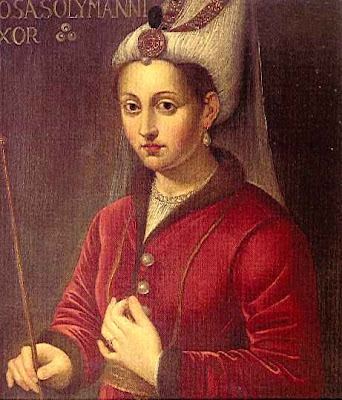 Anonymously paint’d tableau of Aleksandra Lisowska (c. 1510-1558), wife of Suleiman the Magnificent, also variously known as Roxelana, Roxolana, Roxelane, Rossa, Ruziac, or by her Turkish name of Khourrem (or Hürrem or Karima), meaning the “laughing one.”

Out of Jeff Hilson’s excellent and jittery-quick Bird bird (Landfill, 2009):

Why I am not a snipe. I went to scotland, needles too, as it was so so cold. Say “falls.” Dear & I hope it was to scotland I went to not & to cornwall as they are quite a few apart. Bill hooked sorry about that & left. Bill turned down & left. Bill shorter. Bill somewhat shorter. A much shorter bill. Short straight bill turned up & left, jangling of a bunch of keys, bell-like, which was then all over, brief. And I can’t stop song, no, no, songs we can’t agree who even scored. No white no white (which she said she did, right through) which makes this the last story. Dear as well, when I go down sorry. And his little wife climbed, beautiful about these men.

A man and a quail descend to farmland. Forget cellophane this mister wants to see some quail on quail. For which he wears my nellie boots. His cock-petite & on my lips it was quick quick & I obey to “lift up your cups” on the way in. His wild end was snow on snow & robins cutting in. I have no escape pattern. Some ornithologists moving away. Robins for most people. Ovens you need. At the hay nets the prose is clumsy. Some órnithólogísts they móve awáy. Bare ruined choirs etc. Kitten heels. Dolly pockets. Knee-high flats.

Who would collaborate with me now jim dine’s dead, the artist jim dine. Oh my honey he probably died though and was gone away like the heavy crow in the morning or, because of comparison, like the rain coming up. After this I ran out of the empty house of folklore. I heart this house. I think it’s raining, raining in my heart house. Didn’t it on the hydropiper and the hydropiper’s son? They’re realer than the heavy crow whose tiny bushy throat smells. A heavy crow can have a tiny throat. I want jim dine dead or alive. Marries nancy minto & they move to london in 1966 or 1967 it depends who you believe.

Something kind of wonderful idiot savantishness (perfect unseen logicks) that moves one along. Out of the cheesy-sloganeering irony of “I heart this house” ones ascends (with a snicker, though heartfelt, affectionate) to the almost impossibly cheesier quoting of the Buddy Holly ballad (written by the husband and wife songwriting duo, Diadorius Boudleaux Bryant and Matilda Genevieve Scaduto “Felice” Bryant) “Raining in My Heart.” Bird bird’s devotedness to tracking (detachedly, breezily, without assigning “significance”—see: “or, because of comparison”) whatever flits through the brain-thickets (mark’d, natch, by high preponderance of indefinable—meaning, too, illimited—sex).

Impeccable straightforward design by Jeremy Noel-Tod of Landfill Press. Check the epigraphs. One out of “Introduction to Heinzel, Fitter & Parslow eds, The Birds of Britain and Europe (“The scientific name of an animal is part of the international language of science enabling naturalists in one country to know what those in another are talking about”), one out of Philip Whalen’s “Plus Ça Change . . .” (“I’ll ignore those preposterous feathers”), one out of Krazy Kat (“I dun’t savvy—spikk plaina, plizz”)—all pointing to Hilson’s determined ambivalence (negative capability as varia lectio) and humor. 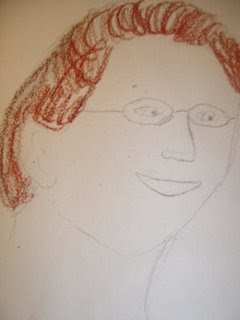