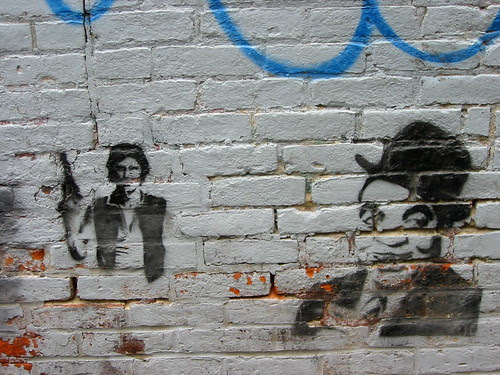 A Wall (Revolver and Askance)

Bizarrerie sur bizarrerie. Ted Pearson, in a piece riffing off the word “session” (with a nod to being halfway through The Grand Piano’s project’d ten booklets—“this . . . might figure as the caesura of our project—much as, in the midst of a jam session, a collective momentary pause stops time, then unleashes another round of free and fierce improvisation”—heroic, that) defines what he calls “a community of practice” (“not without elements of clubbiness”), only to torque the story—astonishingly—into one of community under assault, community become victim. It is a fitting move, one supposes, and perhaps inevitable, in the Bush / Cheney political milieu of rev’d-up imaginary outside threats—to point to one’s tenacity and imply’d purity vis-à-vis some unnamed harm-wielding “other.” Pearson:

“Of those who do me no harm, I ask that they do me no harm. Of those who harm me, I ask nothing.” These words by Antonio Porchia point to the juridical sense of “session” as a site of deliberation and judgment—and pointedly parse the agency and intent of those who judge. Concurrent with the emergence of Language poetry into the larger public sphere, there came detractors who sought to dismiss, if not silence, its claims and manifest accomplishments—a confirmation-by-negation (welcome to the Terrordome!) that Language poetry had arrived.
I’m not referring here to the aesthetic disagreements, theoretical debates, and ideological conflicts that arise within and between communities. These are inevitable, at times productive, occasionally heated, but not intrinsically harmful. Rather, I refer to those whose critical judgments are suborned by willful misrepresentations of the work and by ad hominem attacks on the community. Such attacks, some obsessively prolonged, are the dark side of the historical record. They constitute its social pathology. Yet they, too, are influences, albeit malign, on the reception of the work and the professional lives of actual people.

One almost need only insert “hard-working American” into the final phrase—“the lives of actual hard-working American people”—to make a Bush speech defending, say, increased vigilance and security in the fight against terrorism. “Tearism.” Welcome to the Terrordome, indeed—“Move as a team / Never move alone” is how that song goes. Two things strike one here: how the historical reportage (“there came detractors”) shifts subtly into a present threat in the second paragraph. And, how sternly “othering” the lingo gets: “obsessive,” “dark,” “malign,” “pathology.” Nutters and crazies out there.

(One’d note, too, apropos Language poetry’s new doxologies, the Antonio Porchia aphorism that goes, “The chains that bind us the most closely are the ones we have broken.” How many more instances of the tired claim that Language poetry provided “a radically altered relationship between readers and texts” are forthcoming? As if the “imperative” of “active engagement in the production of meaning” ’d been “optional” in, say, Christopher Marlowe’s day. Hogwash.)

Steve Benson’s piece strikes anyone (who’s been following the bouncing ball of the Pianists’ song) by the near-complete absence in it of the psychological jargon that seem’d the prevalent mode of Benson’s earlier entries. Here, limn’d with tact and sensitivity (“by consensual memory”), is a fine sketch of some of the procedures and mechanics that led to things like the “brat guts” line. Too, one gets a sense of the mid-’seventies milieu that allow’d for such extend’d periods of goofing around. And, how newer technologies (photocopiers replacing clumsy stencils, cassettes replacing reel-to-reel) shaped some of the experimenting. Benson’s memory of two people typing (whilst one read aloud) in the jams with Robinson and Perelman contradicts the earlier scenario (two reading, one typing) in a useful way. (Meaning, I find it of some utility to think about the differences. And isn’t event—and its versions—the thing one turns to autobiography for?) I suspect a lot of that sort of goofing around occur’d in that period, limbering up exercises, collaborations, circling around a table cover’d with typewriters adding lines, writings “under” all sorts of substances. Or, I know a lot of it did. In Ithaca, most of it got toss’d out, or stuck in folders, or raid’d for other pieces. Nobody decided to make an aesthetic program out of it. That would’ve made it “serious”—a deathly thing, and kill’d off its attractions.

Benson’s story that—on first reading of “Not this,” the words that open Silliman’s Tjanting— he’d “simplemindedly first supposed a contrarian and possibly competitive reference to Barry’s magazine, This.”

Benson’s thinking about “the transcript” and where art itself finally resides:

The order of things seemed to present the transcript as the final index and virtual tombstone of work generated through impromptu improvised performance in public. The transcript as an imposter artwork reiterated in another valence the principle I understood in “Not this,” and it articulated the multiply-incarnate displaced nature of the art I felt most often then involved with.

Providing another reading (of several) of “Not this”—a string that runs through the reticule of Benson’s piece, drawing it up tight.

And Benson’s paean to letters and letter-writing (providing, too, a hint of the range of aesthetic—or merely social—contacts):

I first found intense involvement in writing and receiving letters, falling in love with persons and with writing through the mails, testing and finding verbal powers and invention I could not have imagined otherwise. Sending a letter was an immediate instance of publication to one who would certainly read, even avidly, my production, the dear reader anyone might seek. It was seduction and display . . .