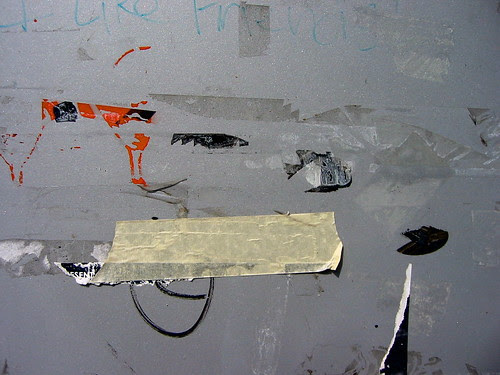 A Wall (Mask and Razor)

I know Chris Martin almost solely through the fine editorship of the whimsically named (and present’d) magazine Puppy Flowers, having never come across any of a handful of chapbooks he’s got out via Bench Press, isabel lettres, and Angry Dog Midget Editions. So I alight on the newly in print American Music (Copper Canyon Press, 2007) with little preconception. A kind of readerly tabula rasa’d “stance” that’s somewhat rare, I’d think, and provides an emphatic boost to one’s eventual judgment, no matter the verdict. Here, happily, uh, “innocent”? Meaning, I think it’s a terrific book.

Martin is up front about finding a way to write, detailing in a piece of back cover copy how “One of the things that opened the world of American Music to me was plagiarism . . . In order to feel comfortable speaking from my own voice, I found it necessary to include the voices of others, I wanted, as Creeley said, to find company.” The kind of statement that, I find, is capable of boding the baddest of bad weathers in the form of moronic “sampling,” all mere technique and knowing nudge. Even in a finely word’d note that ends American Music—“Words lead double lives: anonymously adrift and tethered to authorship”—that precedes a listing of some of the “voices in the chorus,” I suffer ignoble presentiments (though I am buck’d up by the sheer variousness of names, Jean Michel Basquiat, Ed Dorn, Lyn Hejinian, Werner Herzog, Bill Withers, I Feel Tractor, Gaston Bachelard, &c.)

If I expect’d a jittery recording of acontextual voice, proceedings interruptus of hint and miss, what I read is entirely different. Martin’s voice is remarkably present, sardonic, toying, sheepish, mischievous, full of exceeding wonder—indeed, the “chorus” barely impinges at all. The poems are models of velocity and containment—they fly short-linedly down the page, they scoop together a whole range of things, worlds of simultaneity (I am thinking of Lyn Hejinian’s recent work model’d after the three-ring circus). Here’s one titled “Fertility for Dummies”:

Reads the book thankfully
Unread on the shelf, the glass
Gym across the park

Deserted, the tips
Of three of
My fingers have grown

Waxy, taut, things
Welling between the surface
And the bone as a lady

In an eggshell
Shawl pours over her
Copy of Southern

Accents only to lift
Her eyes from the page, lean
Across the table and leer

At me, increasing my ever-present
Paranoia that strangers
Can read the intimate portraits

The panes like some Felliniesque
Spring wildly jumping
The gun, this Thursday

Languor could use such an Italian
Commotion, the impromptu
Bonfire flush against a sudden and cartoonish

Bosom, it is in
This way that my biology attends
To the shapes my looking

Wades through asphalt, how
One building dwarfs
A larger one merely by the affect

Of its character, the way the boy
Impatiently cultivates
His inviolate sheen, combing

The grates with his eyes, his fists
Hidden but surely
Balled, not often am I

Prepared for violence, though I find it
Natural, in me as in
The world, and it remains

Revolting, the brief
Desire to trample something
Living, loving certain

Inside a slide
Trombone and I have
Found myself too

Sane, and sullen, and suddenly
I feel just like Bonnie
Raitt on the cover of Streetlights

Her mouth unself-consciously
Open, a little
Question in her

“What is this?” indeed. One thing it is, is one long sentence—an approach that is remarkably consistent in American Music, no more that atomized puncta of New Sentence-ry, that pointillism array of disparate particulars un-melding. Here, things are streaming, like video, and the operative words are as and while and and and and now. Time, like the sentence, knows no division, howsoever minute, and only the sweep of a gaze is needed to depict its monstrous variety, its untrammell’d fluidity. The short lines, initially cap’d, offer speed and keep one off balance: insistent short-term ambiguities made by line breaks (“a lady / In an eggshell / [half beat of miniature visuals] Shawl [readjusting out of pleasant fairy tale and into fashion lingo, seeing the word “eggshell” switch diction-allegiance, a small exhilarating ride . . . ]”) The poem registers almost indifferently, that is to say, without any strain whatsoever, the constant undercurrents of sexual unrest so formidably display’d in cities, and in language. The other thing that carries the piece is its careening big diction, demotic “Spring . . . jumping / The gun” to the brilliantined up (almost greasy in its preciousness) “the boy / Impatiently cultivates / His inviolate sheen.” I love it.

The aim to conquer by
Purely aesthetic means the ordinary
Range and surly pedigree of
The natural world is one
Common enough to merit little
Fuss beyond the framed up
Shakedown—a repeatable coulee-style
Washout—of its driest capture.
All the nodding relinquishment that
Is beauty, grandeur purloin’d by
Seizure’s fits and snatches, mechanical.
All tracery and bulk, mass
Itself providing impetus to art,
As if, without it, it’d
Sleek down timorous, beastly, pale.
That brassy farmland with creak
Of weathervane, that understudy land
Shoehorn’d in under a flotilla
Of high white nimbus’d clouds
Misses completely the spittlebug’s saliva-
White wad hanging in that
Green fork of timothy, misses
The scree of shale tipping
Down into the creek bed,
Misses the field sparrow with
A bill the color of
A thumbnail pendulum-wobbly atop
A sedge-stalk, and grub-
Traffic below in the tamp’d-
Down dead zone grassy intersticials
Where the ordinary fuss is. 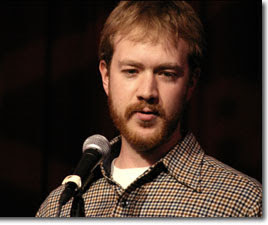