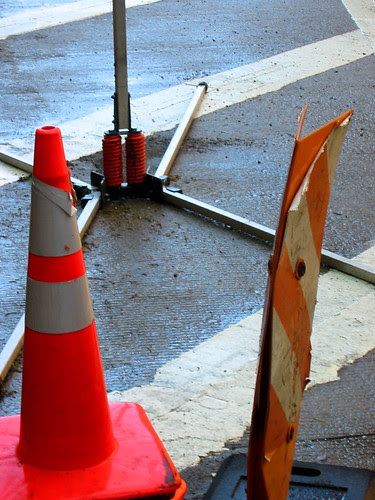 POEM FOR A POET

Accuracy’s one of the many things one is liable for, coterie-back’d or not. Out here in the plains, black clouds bungling up the horizon, reddish specks of wild horses in the distant crease of canyon, the cottonwoods shedding stuff everywhere, we ain’t got no bunkhouse, and no tight-blanket’d bunk to bounce a Webster’s off. No collateral mesmerism. No hellbent radical sidewinder snake making inroads for the collectivity. No fucking movies. We shoot any rangy peckerwood what gets gabby. We—pshaw—that’s my broken chair way of talking. In lieu of the rain-color’d cordonings-off of mutually borrowable desires (so I hear), one hunkers in the dust where a peccary’s dump’d. Counts the excreta, and looks for the beetles that’ll deposit it in the endless implausible corridors of desert. Just how kids is. Unflaggingly, one attends to the act of looking itself, wholly uncharm’d by the latest carney-bark’d immediacy, unkempt by any standard. A Chrysler full of jimson weed tears by. A Kurdistan settler sweeps the earth with trailing black robes, imploring the cropdusters to return. A dust devil dervishes by, pokes out one fat finger, and drops in a heap of exhaut’d camaraderie. Thank God we’re not
all stuck in mid-Atlantic up on the bridge
of some big fucking boat, talking about beating
the tar out of one another, or hoisting a sextant
only to lop up against some New Englander
captain’s funny hat, invariably bobbing, and he
there holding a Zippo to a cork, about to
malign a tradition.
All the waves move in one direction
a little slant off the way the boat’s point’d, climbing
up like hair raked up with a comb into a tease,
and unraveling, lacy spittle flecking the green. Gulls
teeter and wheel, and cry out with human voices. Miles
away where the sea capitulates to land, gypsy
men paw bare-handedly at the clattery shingle in fits,
scooping shallow pits for dead daughters who
fled to the disarming cities. A surge of wave is nothing, dangle-rope of sluttish allegory unattached. If you’re thinking my horseplay’s smudged my mascara, oh, maybe so, maybe so. One’s as liable here to fall into plutocratic wheezing about one’s first editions as one is to find a boy who’ll scrounge a whole knobby arm down in the brine to fetch the final pickle out the barrel. Impossibly late it is, the mendicants assemble, the auctioneer’s start’d that hebbedy-ebbedy stuff and the house confederate’s mentally tracking the path one enormous drop of sweat is making, armpit to hip. Consider yourself the house confederate. Consider yourself the mendicant’s ass. Epigone city is where we’re at, or I haven’t dirtied myself. After fifty, if a man still wants a truck . . . (Insert irony’s poky little ellipsis.) I ought to make myself clearer: the social is broken, a mold and a swerve, a distraction. There are those who cannot speak without (howsoever subtly) histrionic flagellant manoeuvres. There are those who cannot speak unless raptly engaging (howsoever deludedly) in the blunt exercise of power. There are those who cotton to whatever washes over the wash that washday. Somewhere Ashbery speaks of how child and pervert
Join hands, in the instant
Of their interest, in the shadow
Of a million boats
at the exact moment when hunger’s become “merely a gesture.” Beauty built of mete sundry inaccuracies about to topple. Mad semaphoric flag-waving. A permanent regatta slip barter’d off by the commissioner of the marina. Wildly formal dining off platters of crudités become a wildly formal dunning. My hunger, confederate, is solitary, inextinguishable, and brute, and sweeps by.

Thinking about Robert Frank. The late Mabou-made messes, collaged combos with writing—sick of / goodby’s and hold still—keep going—drip and smudge and tape. Objects invading the pictorial plain / plane. How to scribble in a piece of writing, how to cover up (barely, so drawing attention to) earlier sketches, thumbnails. (Jack Spicer lemons.) How to make contiguous frames enjamb, the butting up plain a plain rebuttal of the desire to include everything. Salman Rushdie says of Frank: “Looking at the Mabou pictures, I remember these lines of Virginia Woolf: A masterpiece is not the result of a sudden inspiration but the product of a lifetime of thought.” 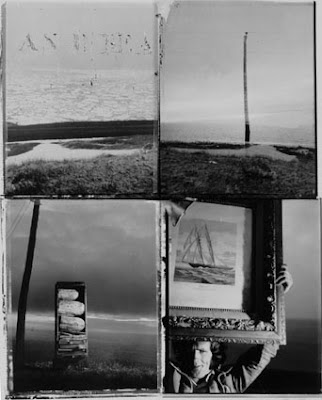 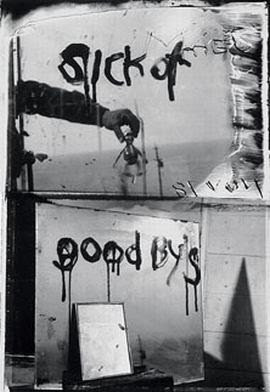