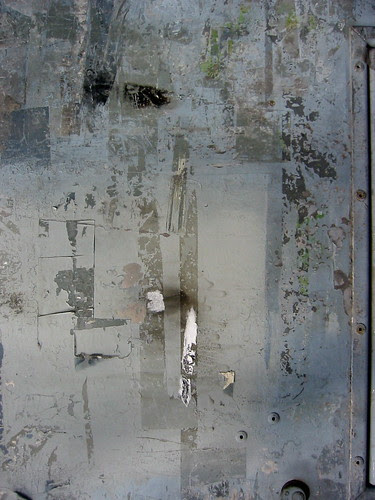 A Wall (Smudge and Seam)

In the terrific brütt, or The Sighing Gardens (Northwestern University Press, 2008), translated by Roslyn Theobald, Friederike Mayröcker’s “I” sits writing with both feet (“marled”) in a tub of hot water, and worries that her notes’ll slide off the table into it and be soak’d. Her “I” is “an abashed loser”—she reads Roland Barthes and comes across lines of Robert Musil, and compares her own writing against Musil’s “stylistic means” only to see herself “lagging far behind”:

. . . if I compare the soundness as well as the transparency of Musil’s language with my own, mine seems vague, frail, superficial, and incapable of casting real shadows, one of the prerequisites for good literature : as we are dealing with living objects of art, they have a shadow, but this must be proven in the practice of language, I say, the most difficult thing I say, is the use of verbs. . . . often, I say, not having the appropriate verb at hand, early signs of dementia, mentally underequipped, or there are these tiny PARASITES in my body (head), etc., probably monkey business.

It is recurrent, a sense of wrongedness, of charlatanry, of uselessness and doubt. Mayröcker’s “I” summons up Francis Bacon’s paintings (“I could always trust in him, I mean I could trust in the ugliness and stench”—she mentions in particular “Self Portrait, 1973,” and, surely, the legendary slovenliness of Bacon’s studio is echo’d in Mayröcker’s own note-clutter and -scatter, dross-toss, repeatedly), echoes Beckett (“we end up standing at 1 open grave or another again and again”), mimics Kitaj:

I certify myself a failure, from the earliest years of childhood on, I say to Blum, always shaping everything into inexact forms, awkward, mashed, disjointed, etc., I submerge myself in the painting by R. B. Kitaj “bather (tousled hair)” (1978), that’s the way I would always liked to have written, I say to Blum, write the way this picture was painted . . .

Though the book’s “about”—in a large sense—itself, its own coming into writing, there is a story “casting real shadows,” though splinter’d, disjoint: that of Joseph and Mayröcker’s (“I”) increasing fondness for, attract and repulse movements re: him (“I say to Blum, and my heart is no longer bleeding, when I think about Joseph, he has become a character made of cardboard, cardboard comrade, I say to Blum, maybe again, over and over again, inadequate my feelings, arrangements, judgments, I tramp through the deep snow in the courtyard of City Hall, looking for an the exit . . .”)

(The compulsion to continue that draws long and longer what intended to be shortish quotes, seeing how each additional clause torques the previous, as if each sentence were a word in the Basque language Euskera, an agglutinating language of about 200,000 words, whose vocabulary is monstrously extended by nearly 200 standard suffixes, simple enough concepts becoming words of formidable length, and precision—so with the Mayröckeresque sentence tailings ever extendable . . .)

“Joseph” is immoderately link’d to Mayröcker’s story of writing brütt (which is brütt itself), he is goad and rein both (just the way anyone’s writing out of love—or into love—provides marvelous focus, a spur and a guide, writing with enough heft for shadows, even when done in the midst of aleatory jamming, or constructivist duty, see Jackson Mac Low’s “Stanzas for Iris Lezak” for example). He is cause and prevention of the writing:

I say to Joseph, just imagine! suddenly I’ve uncovered : invented the beautiful art of storytelling, against which I’ve struggled so often and so long, weathered that is . . ah, I say to Joseph, what shall I do with my BOX OF WORKING MATERIAL with my paper with my impulsiveness, it will turn out all the same no matter what I do, the fine art of storytelling is a trompe l’oeil, pretense, and there is a spirit rumbling around in me, mad spirit that is always and again and over and over again resisting this contrary SEDUCTIVE notion of a systematic / rational writing process, right, I mean I am spitting into a folded sheet of grayish white writing paper, HAVE YOU COUGHED UP ANY BLOOD?, the doctor asks, I bend over my folded and ragged sackcloth and writing paper and say : strands of blood, I say, there are these life strands in blood, leave me my life strand of blood, leave me my devastation, my wild curses, the temptation to pitch myself out of the window, my viper’s brood, etc.

Against the “rational writing process” there is the expressivist trauma (happily, Traum = dream) of cough’d up blood, writing as life itself, not as a representation (shadow-throwing) of life. And a vigilant wariness of ruts, a fundamental distrust of falsify’d goods:

A few of us become nothing but ardent businessmen, I say to Blum, who are trading on the goods of their souls they created 2 or 3 decades ago, because there is nothing new coming out of their heads, isn’t that right, all they care about is making a profit on the product of their minds which they created 3, 4 or more decades ago, the venerable powers of the soul : fruits of the soul presented to man and to woman as fresh produce right, I say to Blum, but a soul won’t allow itself to be sold without exacting a price it’s not like a cow on the hoof . . .

A brilliant seeping hint of prophet-tenor there, completely viable (meaning, it’s an international malaise that, not just the finagle-ware of a number of norteamericanos).

I keep thinking of the line of Wittgenstein that goes When one does not force himself to express the inexpressible, nothing is lost and the inexpressible is contained inexpressibly in that which is expressed. One of Mayröcker’s stories, recurrent, is how she is rewriting—evidence of the rewriting erupts without notice, and wars with the existing writing. Mayröcker:

And now I am making a cursory flight through my first draft, I am overflying my first draft, it has escaped me, but maybe in this superficial way (of reading?) there are still a few glowing ravages, or something like that, which can be brought into final, into the final, I mean into a usable form, etc.

And elsewhere, complaining of “running amok in the underbrush of my own words”:

. . .that damned coda, I say, you shouldn’t even be struggling for it, there’s something unseemly about it, isn’t that right, I say to Blum, better to have everything end worn out, rotten, ragged, each and every sequence simply disintegrating, without an end point, without remedial icing, etc.

It is that open work (opera aperta) refusal to feint, to weave and bob and ensorcelate with puppetry, with shadow puppets, (that’d throw, surely, a reasonable illustrative patch out for one’s story’d construction and consumption) that keeps Mayröcker’s brütt so completely alive. Or one might think of it as florilegia and pentimenti, an overgrowing of text over text, mold circles, debris layers, a palimpsest.

Francis Bacon, “Self Portrait, 1973”
(“Under, next to, behind the chair on which he is sitting with legs crossed, a soot-colored (steaming) shadow is spreading out across the linoleum floor, most likely necrological abstinence or liquefaction the broad-faced wristwatch on his left wrist reads 10:30, our : his and my : yoke association, etc.”) 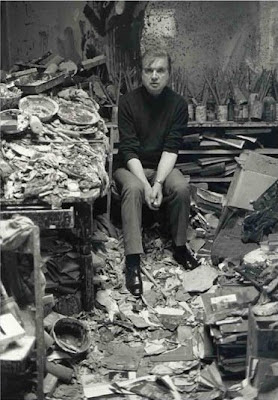 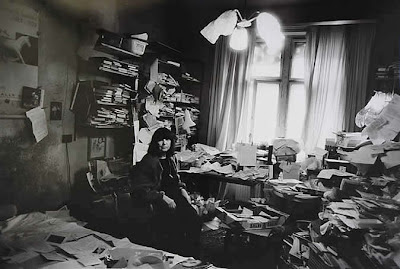