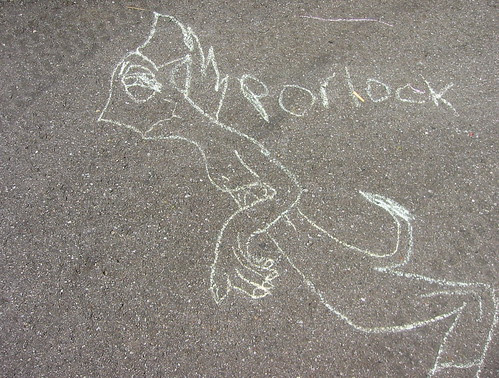 
I keep poking around in Haroldo de Campos’s Novas: Selected Writings (Northwestern University Press, 2007), mostly in the second half, the essays. Here’s the full first paragraph of something call’d “Translation as Creation and Criticism,” nimbly cornering the thinking of one Albrecht Fabri:

In 1958, the essayist Albrecht Fabri, professor at the Hochschule für Gestaltung in Ulm, Germany, wrote an article on the problem of artistic language for the journal Augenblick. In this article, which he entitled “Preliminary Notes to a Theory of Literature,” Fabri develops the thesis that “the essence of art is revealed by the fact that art is tautological, “ that works of art “do not mean but are.” In art, he says, “it is impossible to distinguish between what is representation and what is represented.” Then, turning to literature, he adds that what is unique to the language of a literary work is the “absolute phrase,” the phrase “which has no content other than its own structure” and “which only exists as its own instrument.” For this very reason, maintains Fabri, such an “absolute” or “perfect phrase” cannot be translated, because “translation begins with the possibility of separating word and meaning.” That is to say, translation is based on the “discrepancy between what is said and what is said.” For Fabri, then, translation represents the less perfect or the less absolute (or, it could be said, the less aesthetic) character of the phrase. It is in this sense that Fabri affirms that “all translation is criticism,” because translation “is born from the deficiency of the phrase,” from its insufficiency to be something by itself. “One does not translate what is language in a text, but what is not-language.” And, “both the possibility and the necessity of translation depend on the fact that sign and signified (signatum) may be separated and alienated from each other.”

Occluded the synaptic connectors, that did, for shortly thereafter I found myself drowsing off to the high camp misadventures of James McCourt’s 1975 Mawrdew Czgowchwz, “the diva of the moment.” Long week syndrome, most likely. In the McCourt, people say things like “His eyes, toots, are lupine-blue!” and are named things like “Halcyon Q. Paranoy.” It precedes its sequel, Now Voyagers: The Night Sea Journey (Turtle Point, 2007), itself hung out with a subtitle full of the menace of openendedness: “Some Divisions of the Saga of Mawrdew Czgowchwz, Oltrano. Authenticated by Persons Represented Therein. Book One.” Oddly enough, what some of the writing calls up, is that of another ongoing onslaught, Nathaniel Mackey’s From a Broken Bottle Traces of Perfume Still Emanate. Is it simply the “writing (about) performance”? Or is it the underpinning of something like “cosmic reach” both endow music with? Here’s McCourt:

Czgowchwz soared in flames to B naturals full-voice. There were involuntary screams, shock upon shock, fresh denials from every tier, but Czgowchwz sped forza allegretto, waltzing in circles until there was to be seen but a single swirl of jet lace pinwheeling in dervish abandon. She tore off the baguettes and flung them to the floor like a wanton hysteric at the final “gioir.” There was laughter, a febrile, ghostly cascade of it, answering the echo of Stameglio’s sobbing “croce e delizia.” The final measures were upon her; the optional E flat hung fire. She rose higher and wider by turns. The voice seared, shooting out of the the whirling smoke of her consumptive waltz. “Il mio pensier . . . il mio pensier . . . ah . . . ah . . . ah!” For an instant there was no sound; then something unheard since the creation—a Czgowchwz fortissimo A natural above high C the color of the core of the sun.

He took a preacherly tack which made the most of the possibilities for chastisement the equation of Nazi with not see opened up. Refusing to see, as did looking the other way, came under fire. Tending less toward rhapsody than rant, he put uptown flair and good feeling aside. He harangued and exhorted and even opted at points for a screw-loose, loquacious plea for open eyes, a return to Kenny’s wide-eyed squint. It was Penguin to the limit—a bittersweet biting sound à la Jimmy Lyons without Jimmy’s trepidatious phrasing. Penguin went for the big mouthfilling phrase, staightahead but syntactically loose enough to point to particulars where the need arose. The Greensboro killings came up . . .

Probably the overall rhythm (structure) of minuscule focal shifts, attending to tiny (or large) variations in sequence, is what made me align the two. Mackey’s assured underheave riffing on larger political forces and, often coterminously, local surface worrying (anagrammatics, punning, and the like)—absent in McCourt. Mackey’s tendency to exfoliate, pack in and pump up, a relentless surge of information, while not lacking in McCourt, is temper’d by a blithe air traceable (au fond) a history of leisure, ease? One’d never see a paragraph in Mackey like:

The weather did this and that. They all leafed through magazines. They told one another lies.

Certain snide recusant layabouts is
A phrase lift’d out of
Its plumb jointure of contextual
Immediacy in order to say
Something sure to arrive in
The instance of its saying.
And does, exactly the way
One finds oneself discussing a
Bundle of aesthetic information just
Dropped off, its sempiternal unexchangeability,
A clumsy way to put
It, surely. What I mean
Is, there is no other
Way of saying it, plotted
Or plotz’d, snickering or dish’d,
The story mounts up to
The sky, the scumbled sky.