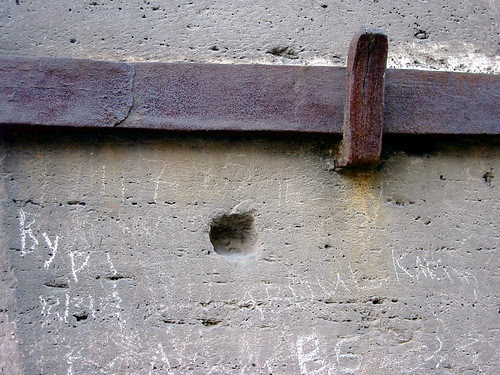 A Wall (Brace and Hollow)

That moon’s got dents and blemishes, and is swoll’d
Up low down where a fat cheek’d be. Its
Constancy is mostly a matter of literature making strident
Ongoing claims out of various affinities, degree by boisterous
Degree. Paring, sickle, chalice, boat, ballast, blubber, only connect.
That’s the way it is tonight in the unreconciled
Lurch of night. By morning it’ll be over there
In the west, looking back at its arc, repartee,
And trajectory before dowsing itself in yonder blue pines.
Yonder: see hither and yon. Yonder day breaks ‘rimming
The rock-row.’ In the absence of my pointable
Arm, or finger. Result of a breakdown in presence,
Meaning I am here (in Levi’s, in cahoots with
The inhospitable wilding air, banging a quarterstave-sized stick
Convulsively and repetitiously into the ice ruts that span
Out hard and alee around about) and not there.
And all that ‘remains’ is this mutilated, incomplete mockery
Of speech, broken shield against the evaporable night’s going.
Words: see ‘The nasty yo-necked, cat-hammed, good
For nothing brutes.’ Withholders and turnstiles, uncontrollable in frank
Unreserved itch, conspicuous veerers, honeycombs, snits. Do not do.

Just flapping my (mostly gum) choppers there, impotent as a fish in a foam-fraught cascade aleaping. Startlingly vacant I am. Read some of John Tipton’s pared-down interpretation of Sophocles’s Ajax (Flood Editions) last night. Try’d to number similar recent feats (Tipton mentions Christopher Logue’s stunning versions of The Iliad and Zukofsky’s Catullus “cats” as predecessors). There’s Lisa Jarnot’s work with The Iliad, Tim Atkins’s Horace, Susan Landers’s Covers riffs off Dante, some of Anne Carson perhaps. What else? The epigrammatic “traductions” of Alexandra Papaditsas and Kent Johnson’s terrific The Miseries of Poetry. Turning back to redo the standards of the bygone empires, to turn such against the rot-vitals of the new. Idle note of vacant yob. Here, come thump my empty brainbox. There. No, there.